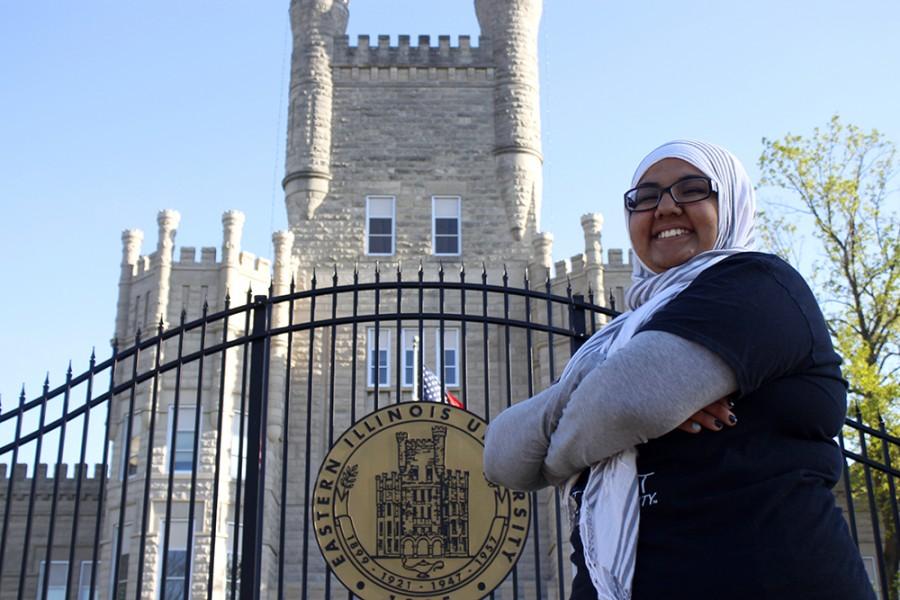 Shirmeen Ahmad, a junior journalism major and newly elected Student Body President, states that she is most excited about making connections with the student body and registered student organizations on campus. “I can’t wait to meet new people,” Ahmad said, “I love it.” Ahmad’s term will begin next Fall.

When she first turned in an application to be on Student Senate as a freshman, Shirmeen Ahmad was hesitant; she didn’t think she would be accepted.

Ahmad, who is currently the student vice president for academic affairs, will be taking on the position as the new student body president for Eastern in the fall.

The junior journalism and political science major first took on the position of senator and then moved up to committee chair.

Each role Ahmad has taken on has been a different level of responsibility, which she said has prepared her for the presidential position.  She said she started from the bottom and worked her way to her position she now holds, which allowed her to gain a lot of experience in college.

Three years ago, Ahmad said knew she wanted to be a part of something to make a difference. Ahmad came to Eastern knowing she would join the student government to one day be the student body president.

“Just having that experience definitely helped me; I’ve learned a lot of stuff,” Ahmad said.

Ahmad also said being part of this committee allowed her to meet and know a lot of the new people at Eastern. Ahmad is not the only member on the executive board who has been there for a long time. Current student body president Reggie Thedford is also an experienced member of the executive board.

Thedford said he along with other board members encouraged Ahmad to take on such a role because she was very passionate about Eastern’s student body. Thedford described Ahmad as a very seasoned veteran to the student board.

Both admitted that some of the best times being on board together was the summer meetings and planning out the upcoming school year.

“I couldn’t ask for a better successor,” Thedford said. “Shirmeen is encouraging; she’s inspirational. She is so passionate about what she does. She kind of inspired me to do better at my position.”

Although Thedford is moving on and handing over his position, he said he is glad that Ahmad is the person to come after him. He said he hopes this inspires other determined females to take on leadership roles.

He said Ahmad would inspire not only women, but racial minorities to take on those roles as well. He said this will be the first time he could highlight two minorities in a row being student body president.

Realizing the role Ahmad has to take over, she said Thedford set a great example for her and she only wants to continue the legacy he left behind. She said she would take what she learned from Thedford to make sure she can continue to keep a close-knit government board. She also wants to expand on the great ideas he has brought to this campus.

“It’s definitely made an impact on me and showed me different values I can follow from how he’s ran his campaign,” Ahmad said.

Ahmad said she and Thedford managed to accomplish a lot together and she would hope to keep it moving forward.