The not so good people of Setzuan 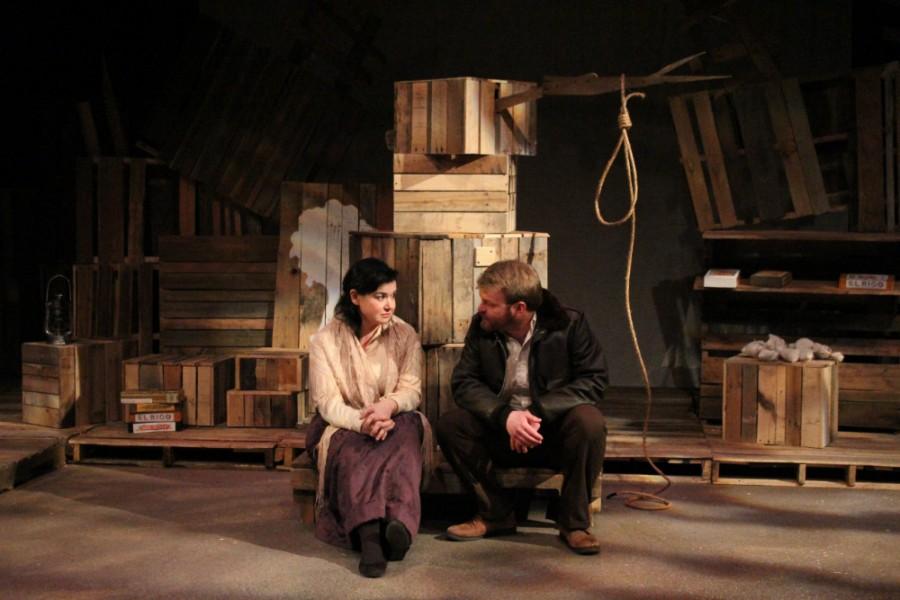 Anne Thibault, an acting professor at Eastern, and Illinois State University alum Andy Hudson interact during the EIU Theatre Arts production of "The Good Person on Setzuan" at The Black Box in the Doudna Fine Arts Center.

“The Good Person of Setzuan” casts individuals in a seemingly poor port town full of nothing but a bunch of lazy, selfish and worthless people. Three gods have all but given up on those living in the town because of a lack of good people.

Bertolt Brecht first wrote the play between the late 1930s on a self-imposed exile from Nazi Germany. Eastern’s adaptation of this play, which began Thursday, was directed by theater instructor Zach Ross.

Much of the acting in the play is quite good, filled with emotion, anger and at times punny humor and a generous offer of sexual innuendos.

Anne Thibault, a theater professor, was able to switch seamlessly between the duality of different roles and personas throughout the showing.

Thibault portrayed Shen Te, a prostitute who is good person but somewhat self-conscious, accidentally allows the three gods a stay at her place because no one wants to take the time to offer a place to stay for others.

The gods then they see the good in Shen Te and give her more than enough money to live off, which she uses to buy a tobacco store, and from there she discovers just how selfish and backstabbing people really are.

When Shen Te begins to see how people are not treating her as well as she feels they should, her shop becomes somewhat of a loitering house and she creates a male alter ego, Shui Ta, her cousin who is the exact opposite of her. Shui Ta (Thibault) is serious, doesn’t take any excuses and commands respect, which she begins to find comfort in and relies on as the play goes on.

Ultimately, the play’s biggest drawbacks are not the acting, but lie within the painfully long three-hour showing. The story is also at times confusing, mixing in issues of morality, ethics and money, which can be a head scratcher and left me feeling somewhat bored and uncertain about the story because of its unnecessary length.

Inside the world of Setzuan, good people aside from Shen Te do exist, such as Wang, played by Frank Monier, a freshman theater major. Wang (Monier) is an odd character because he is kicked around all throughout the play even having his hand broken, but still he keeps his spirits high believes in the gods and his only friend, Shen Te.

The story even throws in a little bit of a love story when Shen Te (Thibault) meets Yang Sun, played by Andy Hudson, a graduate of Illinois State University. Sun first enters into the tobacco shop asking for a job when he is turned away by the alter ego of Shen Te, Shui Ta, but returns later to the story in a dark place. Sun is saved by Shen Te and the two quickly fall in love, but not everything is as it seems.

“The Good Person of Setzuan,” had a seemingly good opening day with approximately 50 people in the small Black Box Theatre in the Doudna Fine Arts Center, but again, three hours is too long to sit for a play — especially with such a complex storyline.

The next showings will be at 7:30 p.m. Friday and Saturday with their encore show at 2 p.m. Sunday. Tickets are $5 for students, $10 for Eastern employees and seniors and $12 for the general public.