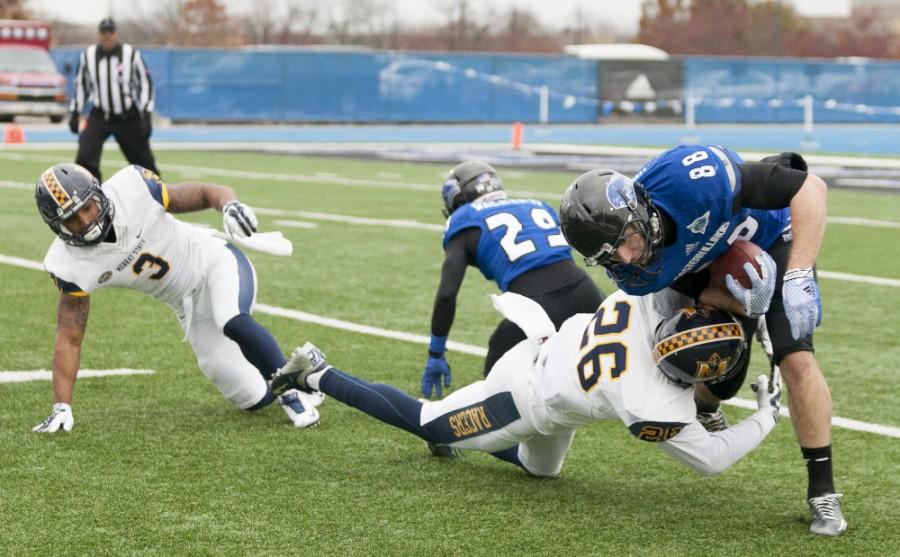 Red-shirt senior wide receiver Adam Drake is brought down during the Panthers' 48-26 win over Murray State on Nov. 12 at O'Brien Field.

The Eastern football team is set for its annual spring game on Saturday, as the Panthers and head coach Kim Dameron look to solidify this year’s team.

The Panthers finished the 2014 season with a 5-7 record, but return several key players on both sides of the ball.

Dameron is looking at Saturday’s spring game as a chance to figure out which players will be a big part of this year’s team.

“With where we are right now, that’s what we’re trying to do, really at every spot, Dameron said.”  “I’d like to go into fall camp with as much solidified, including who we’re looking at the most and all that stuff.”

Dameron is pleased with the Panthers’ backfield this year, especially at running back, where All-Ohio Valley Conference redshirt senior Shepard Little returns. Little was the Panthers leading rusher last year, with 797 yards.

He is joined by Division-1 transfers Devin Church and Korliss Marshall. Church and Marshall, come in after playing at Illinois and Arkansas.

“We’ll see who kind of comes in and rises to the top,” Dameron said. “It may end up being the guy you lean on a little more than the others. For right now, I’ve been really happy with all three of them.”

Quarterback Jalen Whitlow set the school’s rushing yards record for a quarterback and consecutive passes without an interception in his first year with the Panthers. Whitlow transferred from Kentucky last fall and earned the starting job when OVC play began last season.

“Jalen has had a really good spring,” Dameron said. “I’m looking forward to seeing him doing some good things on Saturday.”

“Austin Green has come on and done some good things this spring,” Dameron said. It’s his second year in the system and he feels more comfortable.”

The Panthers receiving core returns a couple of players that had significant playing time last year in redshirt freshmen Anthony Taylor and Tray Mitchell. Dameron said both players have had a fine spring season, while trying to step up for the Panthers.

“Anthony Taylor played a little bit last year and he’s had a good spring,” Dameron said. “I think Tray Mitchell is starting to come on. Tray’s a guy that didn’t play a whole lot last year, but was in and out of the two deep.”

Dameron said the defensive side of the ball seems set for the upcoming season, in regards to playing time and experience. Eastern returns both anchors on the line, in redshirt juniors defensive tackle Dino Fanti and Fedney Delphonse, who will take over the wolf position this season.

“We had a pretty good idea that he would be in that position,” Dameron said. “As far as when you look at our roster and the people and what they could do, we knew he would be the one guy that would have the ability to step up and do all that.”

The Panthers have only had one full-contact scrimmage so far this season. That practice took place last week, and gave the Panthers a chance to tackle each other, rather than doing what Dameron calls “thud” in previous practices.

During “thud” sessions players are not allowed to tackle each other to the ground.

“I just felt that was important with trying to run an offense, especially with a lot of new running backs and offensive lineman,” he said. “If it was going to be live tackling, it was going to be a big time advantage to the defense.”

Dameron said he thinks the team is excited about playing this weekend.

Saturday’s game will be held at noon inside O’Brien Stadium.