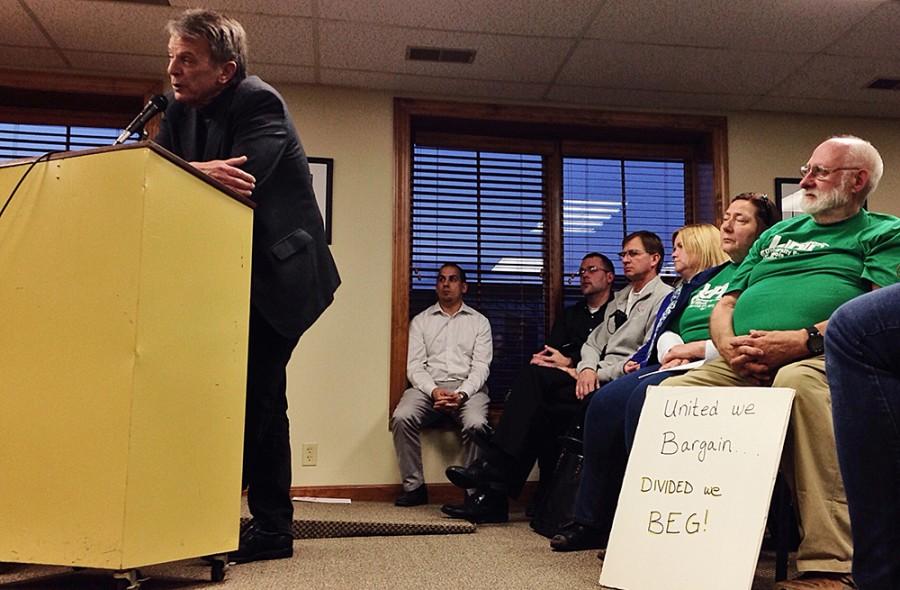 John Moore, business representative for International Union of Operating Engineers 841, addresses the city council regarding his dismay with the passing of the city's "Right to Work" resolution as a standing room only crowd looks on on Tuesday in City Hall.

Four council members and Mayor Larry Rennels unanimously approved this resolution in the consent agenda in one motion on April 7. One councilman, Matthew Hutti, was absent from the meeting.

The room was filled with people Tuesday, with some standing in the hallway and others downstairs viewing a live feed.

John Kraft, a graduate student of political science and a member of the Edgar County Watchdogs, said he supported the resolution; however, he thought the way the council passed it was problematic.

“I previously asked the council and the mayor to place it in a new agenda and vote on it again after complying with the Illinois Open Meetings Act,” Kraft said.

Fern Kory, an English professor at Eastern, spoke against the resolution.

“I ask that we deal with facts and not the opinions that are behind a political and ideological stance,” she said. “I ask we do not pass down politics word for word. We are all in this together.”

Travis Swope, a pipefitter at Eastern, was also against the resolution.

“At the outset all these initiatives are designed to lower the cost of the employees’ labor solely to siphon those for the profit of big business at the expense of small business,” Swope said.

Swope’s comments focused on the language in the resolution that had to with the Illinois Prevailing Wage Act.

He said the resolution would shut out local businesses from winning contracts, adding that workers would be forced to compete with labor costs.

Some commenters explained the negative economic and social impacts of right-to-work zones, and one used quotes from the city council’s mission statement in opposition to the resolution and how it was passed.

Others present at the meeting took issue with some representatives who came to speak about the resolution not being from Coles County.

Rep. Reggie Phillips from the 110th district containing Eastern highlighted the fact that he did represent the area and fought for the university.

“As your state representative, I have committed 110 percent to Eastern Illinois University. I will fight for your pensions 100 percent,” he said. “I want to open the door for sound solutions. What I have been trying to do is bring back jobs to this district.”

Philips said he would be willing to sit down with a woman who spoke earlier on worker’s compensation.

“Guess what folks, I pay those worker’s compensation premiums,” Phillips said. “I don’t care if I’m a Democrat or a Republican; I’m a citizen of Charleston and EIU.”

After the meeting, Phillips and the other representatives stayed to continue the discussion with community members.

After public commentary was closed, Rennels thanked people for coming to the meeting.

“I will consider everything I have heard, emails, other communication I’ve received,” he said. “I want to hear from anybody I haven’t already heard from then make a decision.”

Council Member Brandon Combs said has not seen many people interested in speaking at City Council for two years, and the amount of people at the meeting showed how much they cared.