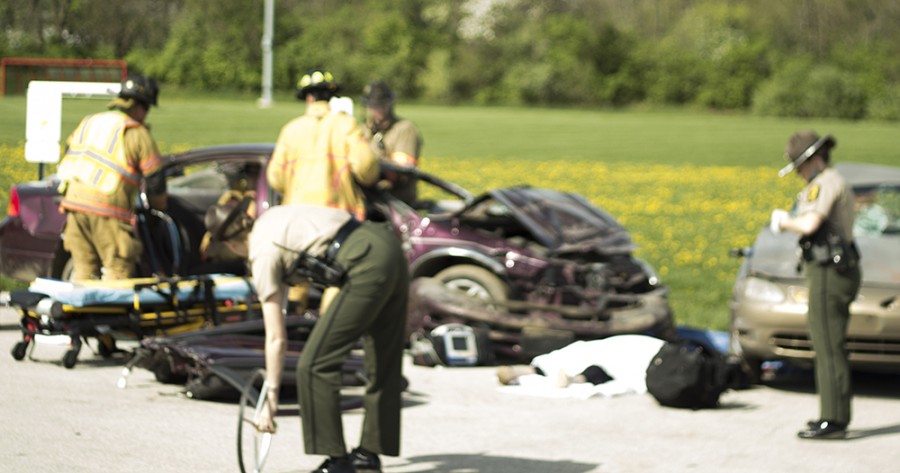 Students at Charleston High School got a glimpse of how intense a car accident can be Tuesday when the Charleston Fire Department and Police Department presented a mock accident and warned them about drunken driving.

The accident simulation was to prepare the students for their upcoming prom and to encourage them to make good choices at the dance.

Captain Jim Calvert of the Charleston Fire Department said he has seen various injuries as a result of car accidents, at least some of which were because the drivers were intoxicated or texting.

After Calvert spoke, the accident began with the sound of a crash. A blue tarp was uncovered, revealing two badly damaged cars, one with the window broken and a girl in a prom dress lying down between the cars.

A boy in a suit then walked out of the car stumbling and looking upset with blood on his face.

“I was on my phone; I didn’t see you,” he said, talking to the other boy whose car he hit.

The boy in the suit then pretended to call 911 and was asked if his girlfriend was breathing. He checked, and she was not.

Fire and police sirens could be heard as they arrived to the accident.

When the police came on the scene, they talked to the boys, with one sheriff testing the boy to see if he was driving drunk.

While this was happening, a voice-over from the speakers said six deaths occur every day because of car accidents.

The girl in the prom dress was covered with a white blanket, as her condition seemed to get worse.

Another boy who was in the car was taken out on a stretcher by firefighters, with the other car being taken apart completely to get to the girl inside.

The top of the car was completely removed.

A helicopter then landed onto the field to take the injured persons to get more help.

“Where am I?” a voice-over asked. “It was supposed to be an awesome night. I’ve been anticipating this night for so long.”

A white hearse then pulled up and was opened so a white body bag could be put into it.

The voice-over then relayed the effects of the accident, which claimed one girl’s life in the simulation.

Tracy Willard from the Illinois State Police then spoke.

“I’ve been working this job for 15 years. That’s the same number of dead bodies I’ve seen in crashes,” Willard said. “I know this is fake, but I still got upset. I’ve been there. I’m absolutely devastated being in a crash like this.”

Willard then took four students as volunteers to make her next point, having them sit in chairs to portray a car.

She spoke on the importance of wearing seatbelts and explained how dangerous it was not to wear one.

She told the students about an accident she has seen where there was a partial ejection and the passenger’s body was partway in and partway out of the car.

The passengers involved were 4 and 5 years old and had been in a car with nine people in it. The 4-year-old’s body was cut in half, and the 5-year-old girl became quadriplegic as a result of the accident.

“This happened because their aunt who was driving fell asleep,” Willard said.

“Don’t let any of us see you this weekend,” Calvert said.

Principal Trevor Doughty said the school does this mock car accident every other year, and they appreciate the fire department and police department for working with the high school.

“It’s done in a very educational but also very impactful way,” he said.

Bailey Price, a student at the high school, said she did not plan on drinking, but the simulation still gave her something to think about.

The simulation was even more poignant for her because she recognized the people in the simulation.

“It’s our classmates,” she said.

Colin McInnerney and Mitch Huddleston were two students who acted in the simulation.

“It was an eye-opening expierience,” Huddleston said.