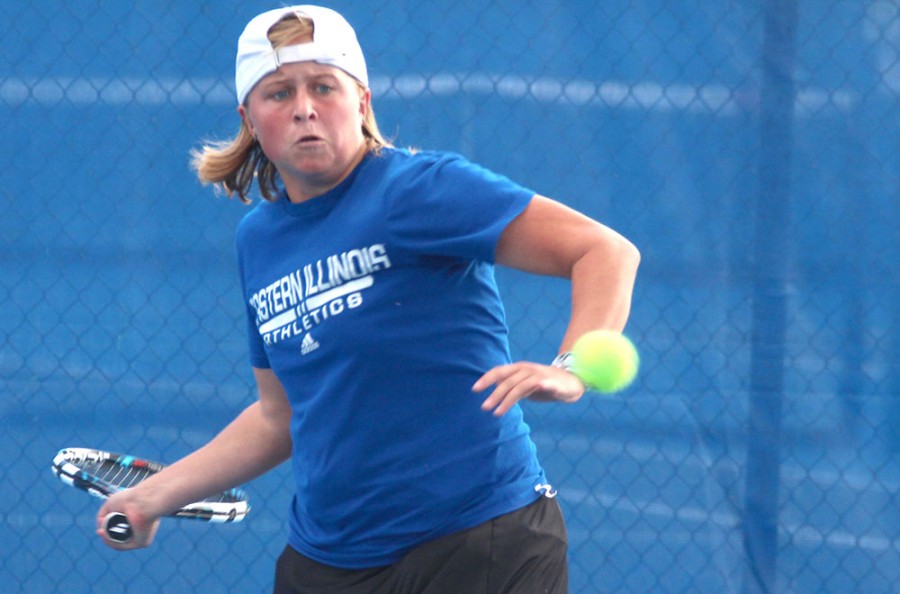 Grace Summers, a freshman member of the women’s tennis team, attempts to return a serve at Darlings Courts in practice Mon. Oct. 6,2014.

The Eastern women’s tennis team ended its season Saturday with a 4-0 loss against Murray State in the semifinal round of the Ohio Valley Conference tournament in Nashville, Tenn.

The Panthers finished the season with an overall record of 13-7 and a 7-3 record in OVC play.

Women’s tennis coach John Blackburn was satisfied with the way the team played and came together this season.

“I was very proud of how the team competed this season,” Blackburn said. “They showed a lot of heart and resiliency and won a lot of close matches.”

The Panthers were able to improve their overall record from the 2013-14 season of 11-6, and they also improved their OVC play record of 5-5.

Blackburn said the team was also satisfied with the way they played this season because of the improvements made this year.

“I think the team feels like they improved a lot and accomplished a lot of great things,” he said.

The Panthers had impressive wins this season with the most important being a 4-3 upset at home against Murray State on March 21.

When the Panthers met MSU last season, MSU defeated Eastern with a score of 7-0.  The match this season showed the improvement the team made over the course of the year.

Eastern and SIUE met again Friday in the OVC tournament, and the Panthers were able to defeat the Cougars 4-3 this time around.

The win allowed the Panthers to advance to the semifinal round of the OVC tournament.

The Panthers were eliminated in the first round of the OVC tournament last season.

Blackburn said the team was able to improve in close match situations, and this allowed the team to come out victorious in matches that proved difficult in the past.

“One of our biggest goals was to be more adaptable to situations that come up in matches and be capable of making our own adjustments and fighting back,” he said.  “I think we definitely improved in this area”

Even with a successful season, Blackburn and the Panthers are already looking forward to improve on from this season and are ready to compete next season.

“We return 6 of our 7 players from this year’s team, and I think the players understand that they can be very competitive in the OVC and are hungry to keep building on our successes this year,” Blackburn said.