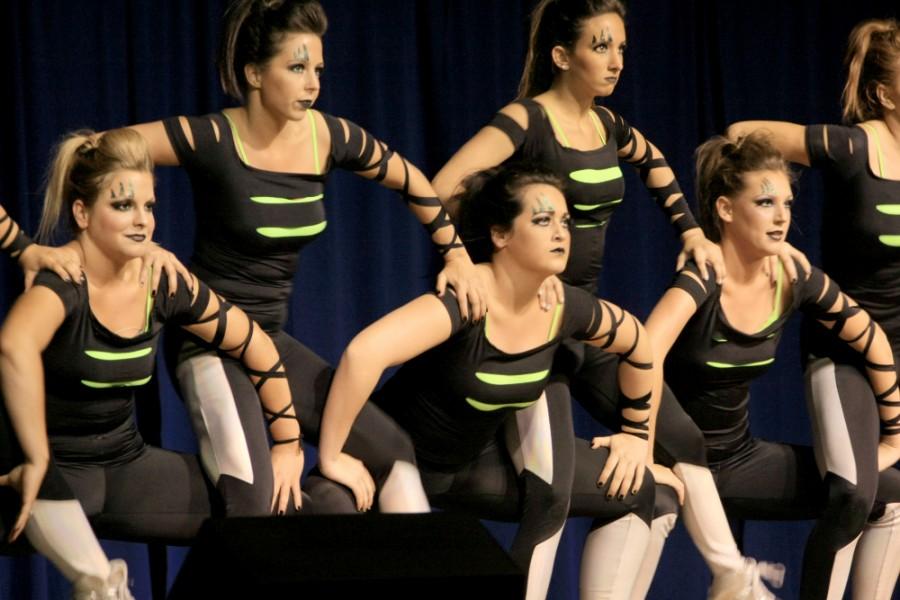 The girls of Delta Zeta showed the audience how they put on a “freak show” during their Airband performance Saturday in Lantz Arena. Delta Zeta won first place in the Sorority division for Airband.

Chants and cheers echoed throughout Lantz Arena as fraternities and sororities took the stage with instruments given to them from birth, the bodies, for Airband 2015, one of Greek Week’s final competitions.

They danced and mouthed words to popular songs in order to take first place this year.

Greek Week Queen and King were announced and coronation Saturday.

Many of the sororities and fraternities performing at Airband had a theme, such as Delta Delta Delta, who had a circus theme complete with outfits of red jackets with gold patches on the shoulders.

Delta Chi went after, exciting the audience as members danced to popular hits of boy bands such as One Direction and The Jonas Brothers.

Delta Tau Delta incorporated elements of popular culture into their performance, as an alarm blared partway through their dance and members emerged with white masks on while a voice-over announced the beginning of “The Purge.”

They portrayed themselves as warriors in their performance, wearing scarves and carrying baseball bats. At one point, they even circled around one man wearing boxing gloves looking like he was getting ready for a fight.

Pi Kappa Alpha members based their performance off the dance group Jabbawockeez and wore necklaces with money signs while dancing to songs like “All I Do is Win” by T-Pain.

Sigma Alpha Epsilon danced in suits and ties, which members later shedded for T-shirts reading, “Let us take you out.”

Kappa Delta interpreted the story of Snow White as members danced to the song “Heigh-Ho” to portray the seven dwarves at work. Then, they danced with a glittery “poison” apple to “Toxic” by Britney Spears, and finally they woke up to the song “Flawless” by Beyoncé.

Sigma Kappa brought the ‘80s back to the arena as members danced in tights, leotards and leg warmers to “I Wanna Dance With Somebody” by Whitney Houston ending their performance by holding up lit-up signs with “Sigma Kappa” written on them.

After, Sigma Nu danced to Miley Cyrus songs from throughout her career, even donning a blonde wig from her “Hannah Montana” days.

Alpha Gamma Delta went for a rock-star theme, complete with one woman dropping her microphone after members were dancing.

Delta Zeta went with a freak-show theme and started out with a woman in a Freddy Krueger costume, with some women putting on and taking off colorful, feathery masks throughout the performance.

Alphi Phi had a time theme with a large calendar that members brought on stage. They had a different song for every season like in December when they danced to “All I Want for Christmas” by Mariah Carey.

Sigma Pi then danced to “What is Love?” by Haddaway and “Can’t Touch This” by MC Hammer.

Sigma Chi performed to Motown classics in gold shirts, followed by Sigma Phi Epsilon, who pretended to be a part of NASA, with a table acting as a control board.

Fioretto said they did the best they could.

“It was a lot of our first times; we’re very proud,” she said.

Kyla Ulrich, a junior special education major who performed with Delta Zeta, said it was awesome to win first place, especially since this was her first year preforming in Airband.

“We practiced probably five or six days a week,” she said. “We really wanted to win. It’s the greatest feeling ever.”

The coronation took place during the intermission of Greek Week’s Airband competition.

At coronation, each of the candidates for Greek Week Queen were escorted to the stage by the king candidates to music. Some queen candidates blew kisses and pointed at their sororities in the stands, while some candidates danced up to the stage.