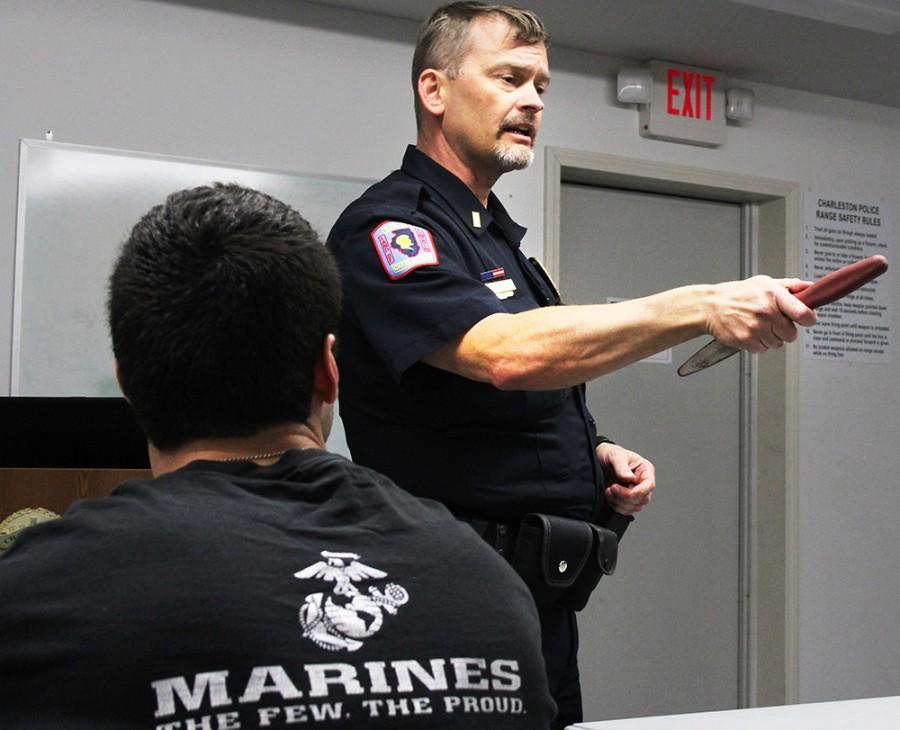 Lt. John Bennett explains how hard it can be to react quickly to different situations at Wednesday Night’s “Bridge the Gap” Community initiative. Participants were put through real scenarios police officers might go through on a daily basis.

Charleston community members and police officers met in the Charleston Range and Training Center at a “Bridge the Gap” Initiative to help the public have more understanding of what law enforcement officers have to do on a daily basis.

The officers and people present were able to go through different scenarios and examples to show the process behind decisions law enforcement may make.

Detective Marlon Williams said some misconceptions of the police are that they are “crooked.”

“I hope this helps people see them in a different light,” Williams said.

Lt. John Bennett started out the initiative by explaining the process behind some law enforcement officials’ decisions, and why some misunderstanding and tension occurred between police officers locally and nationally.

He used examples such as Ferguson, Mo., and Madison, Wis., to make his point.

He said Ferguson was an example of how not to act when extreme forced is used, as officers there did not tell the public much about what happened.

Madison was used as a more positive example.

“They spent time building trust with the community,” he said.

Bennett said law enforcement in other areas need to do the same, and learn how to build relationships with the press as well as the community itself.

“We need to be as open and transparent as we can be,” he said.

Bennett said he saw people expect police to act as they are portrayed in TV and movies, calling this the “CSI effect.”

Bennett saw this effect happen when he went to a house after hearing a call that a roommate had allegedly stabbed someone.

“He said he wanted the DNA off the knife, got angry,” he said.

Bennett said the man wanted things to be done as quickly as they are on television, where cases get solved in 40 minutes, when it takes an average of six to eight months to get the DNA information on an object in reality.

Misconceptions also happen because people do not always understand what the emotional and decision-making process of law enforcement is.

Bennett said the police do not necessarily have to be right when using extreme force, but they do need to be reasonable.

He gave the example of an officer getting a call about a barking dog at two or three in the morning and having to go in a dark area.

“The officer gets out of the car, and all of a sudden there’s a shadowy figure holding what appears to be a gun, the officer tells him to stop, then the figure starts waving his gun,” Bennett said. “The officer then reaches for his weapon.”

Bennett said in a situation like this, the officer is a human being, with colleagues, family and a spouse or kids who want to make sure he comes home safe, and based on past experiences or feelings, he may decide the person holding the gun is a legitimate threat, and so he shoots him.

Many in the room agreed it was a reasonable decision to shoot the shadowy figure, but then were unsure when more details were explained.

“Then the officer finds out it was a 14-year-old with an Airsoft gun,” Bennett said.

Bennett said that while the newspapers would then report that an officer shot a 14-year-old, they would not report on how the officer felt during this exchange, and how he may have felt threatened.

“The officer may then end up an alcoholic, depressed, or end up taking his own life,” he said. “Two to three times more police officers end up dying by their own hand than in service.”

Bennett then did an exercise where he pulled out a gun and asked those present to say whether it was real or fake.

Some participants were hesitant to answer because of the realistic look of the guns shown.

Bennett said some guns might look fake because they are colored, but some real guns are now manufactured like that to appeal to a wider audience.

One involved Officer Brett Compton coming out and shooting a participant sitting in a cop car with a fake gun.

Another had Compton and Officer Erica Roa involved in a domestic dispute in an area set up to look like a house in the shooting range. In this scenario, participants acting as cops would walk into Roa and Compton fighting very loudly, only to have Compton shoot them with a fake gun when they tried to calm the situation down.

Many of the participants would look surprised and stood in place, unsure of what to do as Compton shot them unexpectedly.

Roa said this scenario was based off of personal experiences she has had as an officer.

“People will fight about just about anything,” she said.

Many of the participants were surprised at how quickly they had to react in these scenarios.

Although city council member Brandon Combs did not have any misconceptions about the police before he came, he still learned something new from the initiative.

“I learned how fast things can escalate, how in situations, the police have to think on their feet,” he said. “You don’t know until you’re in that situation.”

The police department hopes to continue the event in the future.

Williams also said timing was a factor, as many events were happening at Eastern at the same time.