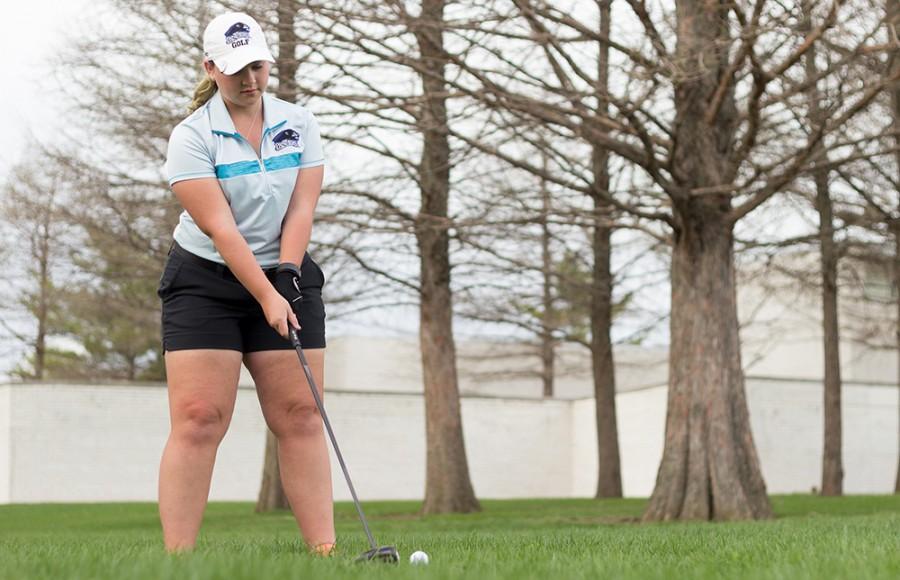 For freshman golfer Annie Getzin, golf has become a competition rather than a hobby, as she envisions herself playing in the Ladies Professional Golf Association, or playing the sport for the rest of her life.

The game has been a part of her life since the seventh grade, and she hopes that it stays that way in the future.

“It’s something I want to be around, because you meet some really, really great people,” Getzin said. “We had 36 volunteers these past two days at Indiana State, and they would spot each hole. Each one was so very sweet and helping us find our balls and wishing us luck.”

“That’s the kind of environment I want to be around and I find that most in golf,” she said.

Getzin led the Panthers after the first day of the Indiana State Spring Invitational on Sunday with a score of 8-over 80, but she finished the final day with a 26-over 168 in wet, rainy conditions at Terre Haute, Ind. She finished third for the Panthers behind sophomore Alexandra Pickens and fellow freshman Anne Bahr.

Despite that finish, Getzin remains one of the Panthers’ top golfers this season. She has finished first for the Panthers in two of the last four tournaments, including finishing first in four of the team’s nine tournaments this year. That also includes two top 10 finishes in individual play.

This first year’s success was a surprise to the freshman, who is from Jasper, Ind.

“In the fall it was really a hit and go,” Getzin said. “Chloe (Wong) was in the 70s and (Tiffany Wolf) would put up good scores and everything. I didn’t expect it, because I’ve got a lot of good golfers among me.”

Along with her success on the course, Getzin has also developed a routine, where she imagines the shot before she takes it. As she prepares for each shot, she looks at the ball and then the hole, which enables her to see the shot in her head. From that point on she decides her move by asking herself a pair of questions.

“I ask myself if I trust the line, trust my shot, and I tell myself yes or no,” Getzin said. “If I don’t, I’ll back away, but if I do trust my shot, I will feel it. I’ll be like, ‘what does it feel like,’ and as I’m trying to remember what it feels like, I’ll just start doing it.”

That has not been the only routine that Getzin has used this year. Problems with its winter facility kept the Panthers from using it for practice, so Getzin had to develop her own practice techniques to prepare for the spring season.

“I had a chipping mat in my room, and I was hitting Styrofoam balls into my door and I would putt to a tee,” Getzin said. “I try to make it work the best I can. It’s definitely not what I imagined.”

Getzin and the Panthers are heading into their final tournament of the season, the Ohio Valley Conference tournament. Its level of consistency has Getzin feeling good about the Panthers’ chances in the tournament.

“This season we’ve been really good as a team,” Getzin said. “Last week at Southern Illinois-Carbondale we shot a 322 and Sunday at Indiana State we shot a 328. So it’s just getting into that consistency zone before OVC, which is good.”

Consistency has been a big part of Getzin’s high school and collegiate career, as she has fulfilled her dream of playing collegiate golf at the NCAA Division I level.