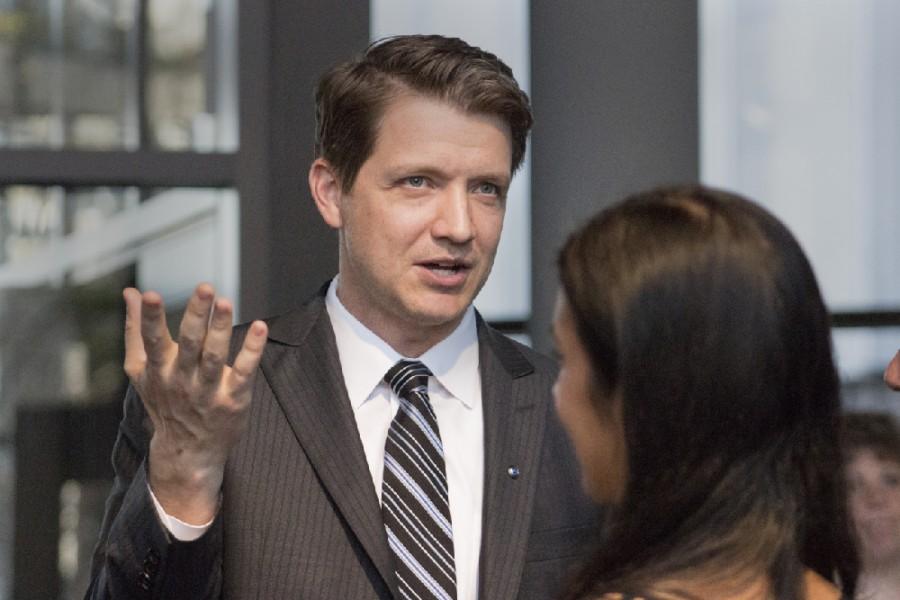 Matthew Kircher talks with his wife before receiving an Outstanding Graduate Alumni Award Friday at the Doudna Fine Arts Center.

When Dr. Matthew Kircher realized his career goals were buried somewhere in strangers’ equilibriums and nasal cavities, he was staring in bemusement at the corroded arteries of an open cancer patient who was receiving surgery on his head and neck.

The only thoughts he could conjure were, “wow, this is really cool stuff.”

He knew nothing of surgery before his decision to spend years studying and observing it. What he did know, however, was how to play the guitar, so he considered himself rather “manually dexterous.”

If he had to tell it truthfully, Kircher said he might have missed his calling completely and never considered medical school if Eastern biology professor Britto Nathan had never taken an interest in him.

At about the time Kircher met Nathan, the now physician thought he might work toward his Ph.D. and wander in the direction of teaching.

But after leaving a message on Kircher’s answering machine inviting the undergraduate zoology major to join his graduate program, Nathan eventually persuaded Kircher he had a future in medicine.

“He was really right, and he was the reason I went into medicine,” Kircher said. “It really never crossed my mind to do medicine until I met with him and until I was his graduate student. He was really transformative for me.”

On Friday, Kircher and seven others were presented with Eastern’s Outstanding Graduate Alumni Award from their respective departments.

Throughout the evening, people would comment on Kircher’s accomplishments and his Eastern roots, but the physician was adamant on relating his successes to the encouragement he received from the professor who nominated him: Nathan.

“I said, ‘some other people are applying for medical school. Do you think maybe I could do that?” Kircher said. “He said ‘absolutely you could do that.’”

Kircher was raised in Illinois, and before attending Eastern’s graduate school, had never known anyone to be a solid role model in his field of study.

“I come from a very humble background. I have 12 brothers and sisters; my parents couldn’t pay for any of my education,” he said. “Everything that I did was taken out on loan. From where I came from to where I ended up – it was the opportunities that Eastern gave me. You don’t have to come from exceptional means to get to your end goal.”

Kircher hopes he can be the example he found in Nathan, for his younger sister.

“No one in my family had ever been a physician before so I guess it just wasn’t on my radar,” he said. “My younger sister is now at U of I doing pre-med, probably in part because she sees that I did medicine; she views it as an option for herself.”

When Kircher began Nathan’s graduate program, was surprised to discover how much of the learning would be performed independently.

If Kircher had a question, he looked it up, and if he wanted to stay on top of his coursework, he did his own research.

Admittedly abandoning the physical classroom for some time, Kircher developed parts of himself he did not know were there.

“I really kind of stopped going to class and suddenly I figured out, ‘I’m pretty smart actually if I read on my own’ – because you’re more efficient if you do it that way,” he said.

As Kircher’s drive to learn improved, so did his grades.

“Suddenly I was a straight-A student and through him I think I realized my own academic potential,” he said. “I think that’s really the bottom line.”

Kircher went on to pursue 11 additional years of schooling after his time at Eastern: four years at Rush Medical School in Chicago, five years of residency in Michigan, and a two-year fellowship at Loyola.

“The first two years are like memorizing a phone book,” he said. “They hit you with a ton of material.”

After participating in Nathan’s graduate program, however, Kircher realized he was more prepared for medical school than he felt, and found himself at the top of his class.

“It was actually easy for me when I got to medical school, honestly,” he said.

Kircher encourages even those who school does not come naturally for, however, to consider medicine as an achievable goal.

Today Kircher is a professor of otology, neurology, and skull-base surgery at Loyola University Medical Center.

He said sometimes all it takes to gain the confidence to accomplish a goal is to see someone close to you do it.