Tuggers take titles in final round 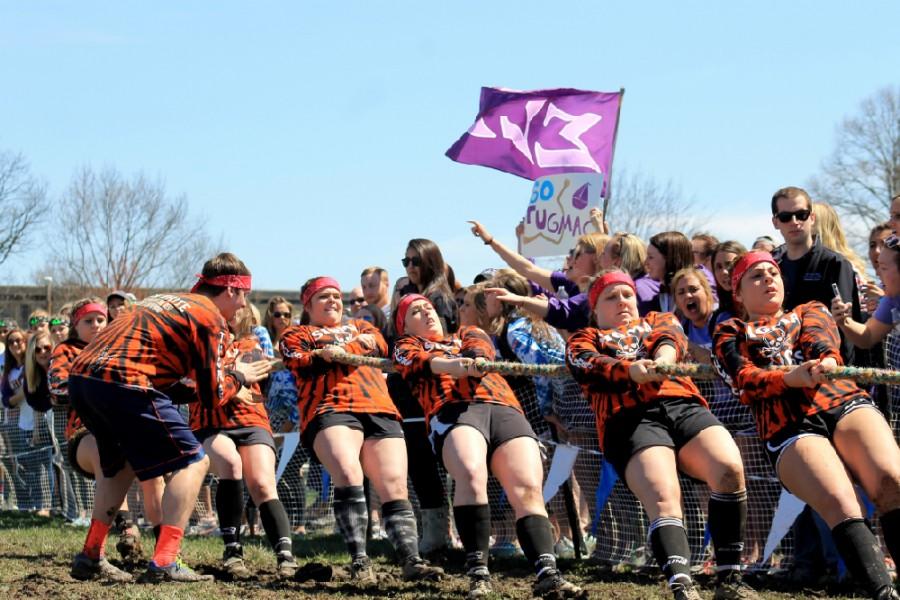 Moments before the horn sounded off, the Lambda Chi Alpha little men’s tuggers raised their hands in the air with two fingers pressed to their palms to symbolize brotherhood; what followed was an intense 2:38 battle to break Sigma Pi’s three-year victory streak.

The little men’s Lambda Chi Alpha team won the final Tugs round against Sigma Pi on Saturday, though the big men’s Sigma Pi team emerged on top against Lambda Chi Alpha moments later, pulling their rivals into the Campus Pond at 1:41.

Robbie Fiedler, a little men’s Lambda Chi Alpha tugger, said his team members had the most heart and strength, which is why they pulled through and outlasted their opponents.

“We ruined their dynasty right there; we’re starting our own,” Fiedler said. “You’ve got to watch (for the) big man now and root for them.”

Jimmy Smith, another little men’s Lambda Chi Alpha tugger, said it was an awesome feeling for his team to finally accomplish its goal after facing Sigma Pi in the finals for four years straight.

“It’s really sweet we finally beat them, but it was a good tug on both sides of the rope,” Smith said. “We did a lot of different things. We ran a lot; we just went harder than we have in the past couple of years.”

Greg Muntean, a big men’s Sigma Pi tugger, said there was no better way for his team to win a championship than to do it the hard way—giving their all in three separate rounds of Tugs.

“I’m a fifth year senior, so I’m just happy to leave on this kind of legacy,” Muntean said.

Next up in Saturday’s final Tugs competition was Sigma Sigma Sigma facing Alpha Sigma Alpha in the women’s division.

Members of Alpha Sigma Alpha put up a fight as their lead tugger slipped down in the mud before regaining her footing to keep tugging; however, Sigma Sigma Sigma pulled harder as the group soon claimed a 1:59 victory.

Jenna Stokes, a Sigma Sigma Sigma tugger, said although her team members were confident, the final Tug proved to be the hardest round.

“Our strategy was to stick them out the first 30 seconds and then make them tired so that we can take them back,” Stokes said.

Alysa Stercay, another Sigma Sigma Sigma tugger, said she was nervous in Wednesday and Friday’s rounds, but knew her team would win in Saturday’s finals.

“I just felt it,” Stercay said. “We worked so long and so hard for this; we deserve it.”

Finally, consolation rounds for each division gave third- and fourth- place titles to the remaining contenders.

The women’s division consolation Tug saw Alpha Sigma Tau taking out Kappa Delta at 1:27, which was the fastest win of the day.

Colton Woolsey, a Sigma Alpha Epsilon tugger, said his group changed up its front-man strategy and focused on hitting as a team, and though they are disappointed they could not be in the championship Tug round, third place is still a nice prize.

“We weren’t really working together as much in the last Tugs,” Woosley said. “We came in pretty focused, and we watched a lot of our videos from the old Tugs.”

After Sigma Nu’s third place victory, members gathered and chanted about how they would take first next year.

Kenny Micks, a Sigma Nu tugger, said there is a lot of pride to taking third because his team worked so hard for it.

“We knew that going into it they were going to try to manhandle us, so we knew we just had to stick them out,” Micks said.

Just before Sigma Sigma Sigma stepped into the water, the team swayed all the way over to one side of the fence, losing the battle nearly a minute and a half in.

Mackenzie Buob, an Alpha Sigma Tau tugger, said her team tried to stay toward the right as much as possible to remain grounded.

“Typically, we have not placed first, second or third in a lot of years, so this is the first time in a while that we’ve placed,” Buob said. “But I think it’s just because from day one we’ve been working out; we’ve been conditioning. As soon as we could get on the rope we did.”

She said both her team and Kappa Delta worked hard, but who would emerge victorious was not easy to guess.

“I think that you can’t ever predict tugs; it changes daily depending on if your team is working together, how well your day has been, if you’re in the right state to win and honestly what side you are,” Buob said. “It’s hard to determine, but I’m proud of where we are.”