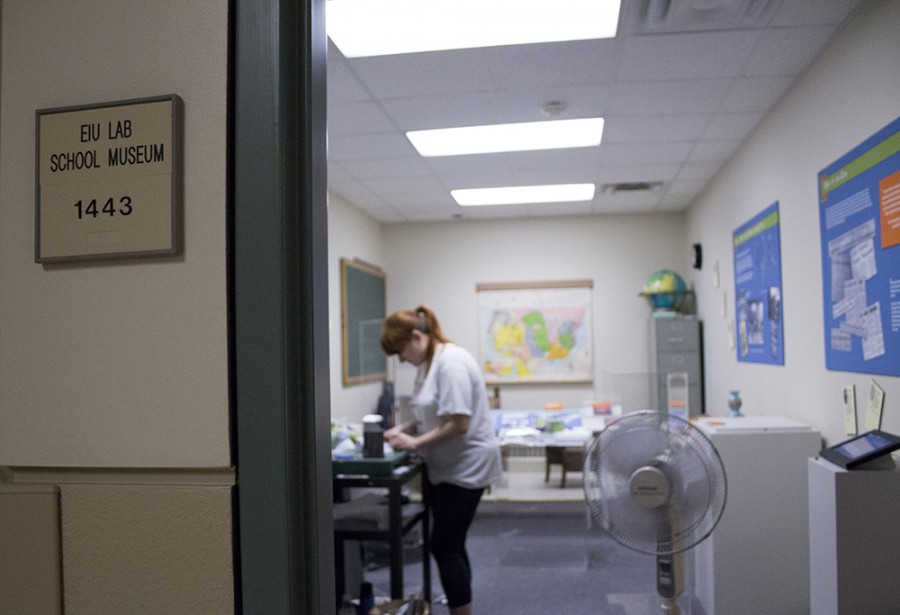 Graduate history students set up the Lab School Museum for their opening reception Thursday in Buzzard Auditorium. The museum is based off of a lab school Eastern used to have from 1899-1974.

Buzzard Hall has had many interior changes throughout history.

One is something not many people know existed, the removal of laboratory schools in the 1970s.

An opening reception for a permanent exhibit that will honor the lab schools will be from 6 p.m. to 8 p.m. Thursday in the Buzzard Auditorium. The exhibit is titled “Mission, Method, Memory: The Lab School at EIU.”

Brian Failing, a member of the historical administration master’s program, said lab schools trace back to the University of Chicago’s John Dewey and his education philosophy of learning by doing.

“The lab school was an opportunity not only for the community and children of the community and faculty of the university, but also a place where college students who were in the education program where able to go to their student teaching and observations, getting hands-on experience in a classroom,” he said.

Eastern had the lab school from 1899 to 1974, and many buildings contained the schools.

The lab school opened its doors in 1899 as the Model School. It was later renamed as the Training School and finally the Buzzard Laboratory School before it closed in 1974.

Failing said the administration has partnered with the College of Education and Professional Studies to help raise awareness about a part of Eastern’s history not many people know much about, let alone that it even existed.

He said a plaque is on the first floor in Buzzard in honor of the lab school, but that is the only mention that there was once a lab school on campus.

The reception will be the first display of the new Lab School Museum, which is located on the first floor of Buzzard Hall and is the same room of the original lab school.

Failing said the education students received from the lab schools were similar yet different from the public schools nearby.

“They had access to Booth Library and the entire college campus, they had summer school where they would go out to Fox Ridge State Park,” he said.

The school was for students from grades kindergarten through 12th grade.  The reason for closing the school was because of lack of funding for the school, along with budget cuts.

The museum will have the supplies that were actually in the school when it was running. Failing said they found an old prayer book from the 1950s to add in the museum.