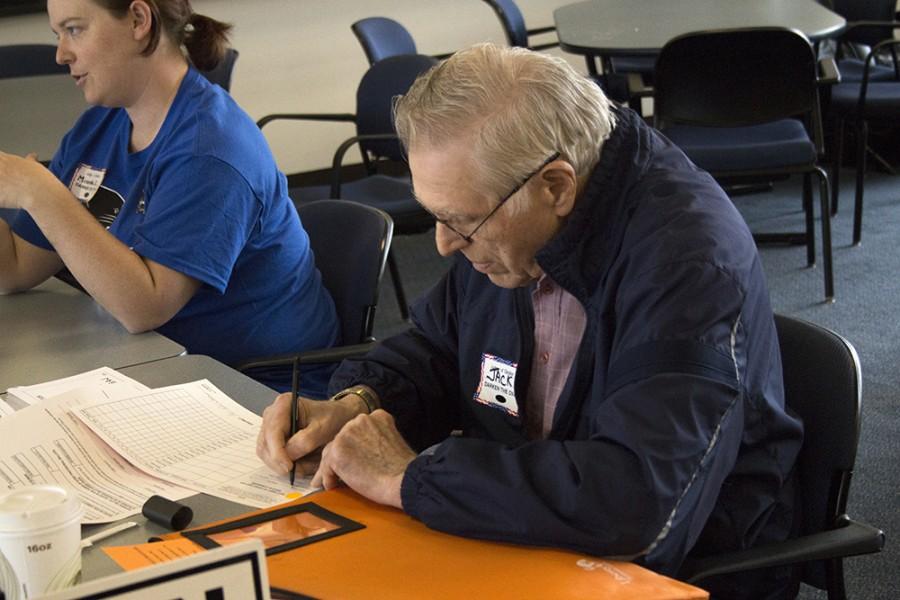 Jack Rardin, an election judge, works the table during the elections Tuesday in the Bridge Lounge of the Martin Luther King Jr, University Union.

Many positions in Tuesday’s elections were unopposed for Charleston, leading to 6.45 percent of voters to turn out for the selection of City Council members, park commissioner and school board members.

Another position up for election was for board of education member, which was between Kevin Oakley and Brian Gough.

The results of the elections are still unofficial, and will be unofficial for 14 days until all the absentee ballots are received.

County Clerk Sue Rennels said no race was close enough that an absentee ballot would make a significant difference.

An Oakland proposition was also voted on that would allow the city to stop the prohibition of selling alcohol. The city voted to allow the selling of alcohol 157 to 130.

Turnout for the elections was low in some areas, and a total of 1,965 people voted.

Voting for the 16th and 17th precincts took place in the Martin Luther King Jr. University Union. Precinct 17 had one voter come out, and precinct 16 had none.

Barbara Funk, an election judge, said a reason for this could be the lack of coverage on the election.

“It was not a very publicized election,” Funk said.

She said some positions might be of more interest than others.

“The park commissioner might be of some interest, but not much to students,” Funk said.

Miranda Zerbst, another election judge, said the low turnout could also be attributed to a there not being many contested positions or issues.

“People turn out to vote for local referendums, issues, and we don’t really have any in Coles County,” Zerbst said. “Here it’s about people filling positions as opposed to change.

A lack of knowledge about candidates also led to low turnout, particularly from students.

“They don’t know about them unless they talk to the school,” Funk said. “It’s too bad, because it’s costly to have an election when no one comes.”

Part of the cost and work of elections include printing the ballots, paying the election judges and moving the machinery needed to vote.

Jack Rardin, an election judge, said he would like to have 100 percent turnout, but he would also wants the voters to be informed, which Funk agreed with.

“If you don’t know the candidates, but still vote for them, you can find out later you might not agree with the person you voted for at all,” Funk said.

Although the election was a consolidated one, Zerbst said it was still worth it for informed people to vote.

“It’s always important if you have a legitimate thought behind what’s going on,” she said. “You don’t necessarily have to just vote for the sake of voting.”

Not having enough information about voting and registration makes turnout lower for both local and national elections.

Jackie Dehollander, and election judge from Precinct 19, said the highlight of her day was when a woman came in who brought numerous voters with her who had special needs.

“It was a wonderful thing,” she said. “She’s doing a very caring and wonderful job.”

Dehollander cited the rainy weather as being a reason people might not come out to vote.

“People don’t want to come out when it’s raining,” she said. “They think there’s nothing really to vote for.”

Venness Walters, an election judge also from Precinct 19, said the county clerk had called saying it was going to be a slow day.

“She said to bring a book,” Walters said. “She said ‘you’re going to be bored to tears.’”

Voter turnout at the St. Charles Catholic Church was also low in comparison.

Judges had been up since 5 a.m. to set up for the election. On a normal election, it would take longer than an hour and a half to take down the equipment and count the hundreds of ballots at the end of the day.

For this election, Murphy said she thought it might take 15 or 20 minutes.

“There’s only one race being contested,” she said. “Nobody’s really interested.”

Local elections are not just ignored in Charleston.

“People don’t pay as much attention,” he said. “One thing people turn out for is if there are some issues like taxes. No one’s going to show up if people are running unopposed.”

One person who did vote in the consolidated elections was Charleston resident Rosie Schniers, who said she very rarely missed an election.

“It’s my privilege to be able to vote,” Schniers said. “Everybody’s voice needs to be heard, and this is one of the few ways we can do it.”