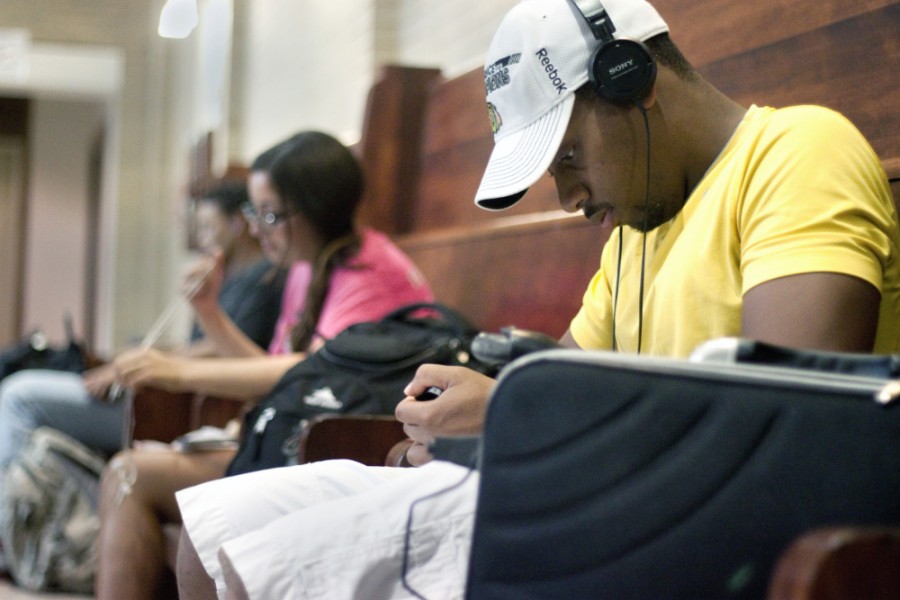 Durryl Rogdale, an Eastern student, listens to music while he waits for his train to Chicago Aug. 28 at the Mattoon Train Depot.

Governor Bruce Rauner proposed a state budget that would include a cut to Illinois’s funding for Amtrak trains that would affect those in Illinois, including many students who use the service.

The proposed state budget would cut 40 percent from the current funding. The budget proposed $26 million in funding for Amtrak. This is $16 million less than they received the previous year.

Mark Magliari, the Amtrak Spokesperson, said this amount of funding would have an impact on Amtrak.

“The funding proposed is not enough to maintain current service levels,” he said. “There is not enough in the state contracts with us to provide the same service.”

The exact changes made as a result of the service reduction is to be decided by the state.

“It is up to the state department how many trains there are and how often they go,” Magliari said.

Magliari said a lot of students used the Amtrak trains, although he did not know the exact amount.

“I am confident that a large number of students going to and from Mattoon are students, faculty and staff from Eastern Illinois University,” he said. “Just as Champaign is for U of I, and Carbondale for SIU.”

In 2014, the Mattoon Amtrak station had 42,872 boardings and alightings, with almost five million riders at Illinois stations, and 56 trains going every day. 1,430 Illinois residents were also employed by Amtrak.

A statement from the Illinois Department of Transportation said they are working closely with the governor’s office on finding solutions to the serious fiscal problems facing the state.

The IDOT said the department would keep customers “appraised as the budget process moves forward.”

Bree Law-Lopez, a senior sociology major, said this might be bad for students.

“Most depend on the Amtrak for getting back and forth, since a lot of students are from the Chicagoland area,” she said. “A lot of student have to use it when they’re going home, because they can’t commute, and don’t have much of a choice.”

Lopez has used the Amtrak to get home before, as it saves her gas as opposed to driving.

“It’s cheaper to get around,” she said.

Kelly Castillo, a senior kinesiology and sports studies major, said the change in service from Amtrak trains because of the cuts were potentially going to affect students.

“I think it’s going to affect them a lot,” she said.

She used the example of her friend who needed who used the Amtrak to see her family in a hurry.

“She had to use it to get home, and it was a family emergency,” Castillo said. “It was her only way to get home.”

She said many students come to Eastern from the suburbs, causing them to need the Amtrak.

“Not everyone has a car down here,” she said.

Students at Eastern are also thinking about the cuts and service reduction because of the impact it would have on their families and friends.

Maddie Smith, a freshman applied engineering and technology major, said her mom uses the Amtrak often.
“She’ll probably still continue to use it,” Smith said. “Her experience with it has been good, she really likes going on the Amtrak.”

She said she didn’t think the reduction in service would have that much of an impact, unless there was a dramatic increase in rates.

Ashley Robinson, a junior family and consumer sciences major, said a lot of her friends use the Amtrak, as well as herself.

“It would affect us because that’s how people get around who don’t have cars,” she said. “There’s a bus on campus, but it only goes home on holidays. The Amtrak goes home every day, when you need it.”