RHA tears down Wall of Hate 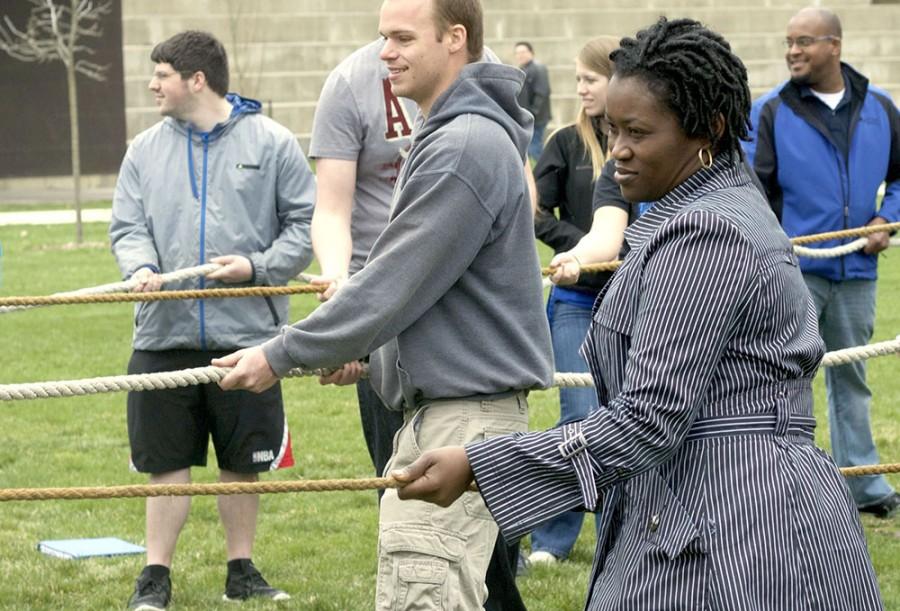 Catherine Polydore, an associate professor in counseling and student developement program, assists in pulling the rope at the Wall of Hate tear down Friday in the North Quad. Polydore was the first of two speakers to speak at the event.

Residence Hall Association’s Social Justice and Diversity Week ended as RHA members and other students and faculty from Eastern tore down the Wall of Hate that had been up all week Friday in the Library Quad.

The Wall of Hate was constructed throughout the week. People were able to write various slurs on cinderblock bricks that they had been called or heard and took offense to.

Ropes were used to take the wall down.

Two speakers, Counseling and Student Development professor Catherine Polydore and associate director of student standards Shawn Peoples, were invited to speak at the tearing down of the wall.

Polydore began her speech by asking those at the Wall of Hate to imagine a world without diversity.

“Imagine a world with light but no dark, or dark with not light,” Polydore said. “Everything colored in a single hue. Would you love that world?”

Polydore has been the recipient of hateful correspondence due to her skin tone and way of speaking.

She spoke of her 13-year-old daughter tearing up because of people at school who were picking on her.

“All I can do is tell her to forgive them, because they don’t know what they are doing,” she said.

In her speech, she quoted Martin Luther King Jr.

She said she had learned to not subscribe to society’s idea of beauty, and not to focus on hate.

“Every moment you spend harboring hate, is a moment away from the pursuit of inner peace,” she said. “You all have a choice to be a vehicle of positive change.”

Peoples spoke after her, saying everyone has experienced or knows someone who experience hateful words.

She told a story about her experience with these words.

“My first experience being called the n word happened when I was a student at EIU,”she said.

She was walking down the street, when a car with white men came up and started calling her and her friends the n-word.

“I was coming to this place for comfort, and friendship,” she said.

Despite what happened, she did not let this act define her or her experience at the university.

“I want to hopefully leave this as a better place,” she said. “I do not want anyone else to experience what I did.”

She said by tearing down the wall, participants were taking back their power.

“This is not who we are,” she said. “You have power, we all have the power, to make change.”

After the speakers, 12 to 15 people held each rope to tear down the wall, People cheered and clapped as the cinder blocks fell to the ground.

Mark Hudson, director of housing and dining, said the cinderblocks would be used for backfill for projects on campus after they were crushed up.

“There was good turnout throughout the week,” he said.

Polydore said it was symbolic for the wall to be torn down.

“I am saddened it is necessary,” she said. “I feel like I have the opportunity to be an active participant against hatred and social injustice.”

She said the first time she ever was called n—— was when she first came the United States, when a group of white males saw her and her friends.

“They said, you n-words, go back where you came from,” she said.

Polydore had come to the United States from the Caribbean.

She said tearing down the wall felt good.

“It felt awesome,” she said.

Cassie Buchman can be reached at [email protected]