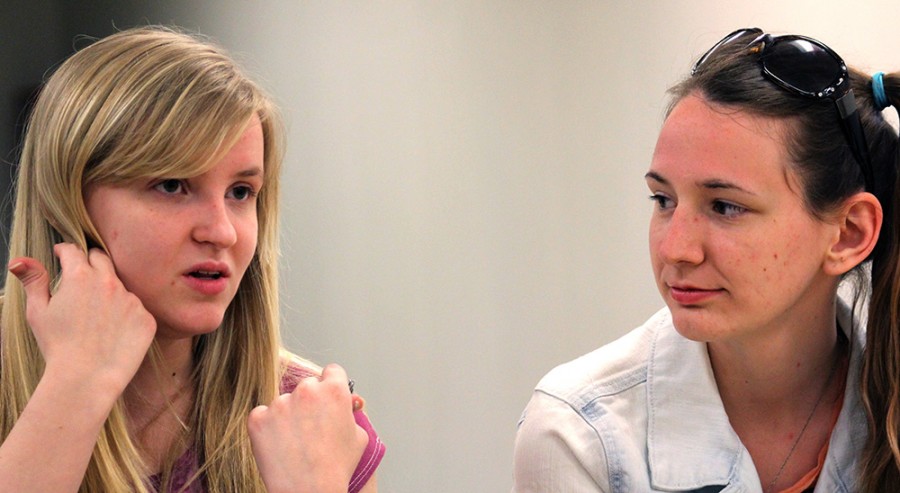 Brittany Hirst, a sophomore psychology major, shares a story with the group comparing having short hair and homosexual slurs during the RHA’s Diversity Books event Tuesday in the basement of Andrews Hall.

The Residence Hall Association other members of Eastern’s community discussed topics such as gender and sexuality, race and ethnicity, and body image and mental health at the “Diversity Books” program Tuesday.

The ‘books’ in the event were not real; they were hollowed-out cardboard boxes with different topics written on them.

For the first part of the program, attendees wrote different negative stereotypes on each of the books they heard then discussed why they put those stereotypes.

For race and ethnicity, people put terms such as “crazy Bible thumper,” “bigotry” and “extremism.”

Jack Cruikshank, a junior political science major, said a way to fight these negative stereotypes was to realize not all religious people were extremists.

“Go to a mosque, synagogue, think about their beliefs,” Cruikshank said.

Michelle Lisack, a college student affairs graduate, said religion gets a bad representation because of a vocal few people who exist in every religion.

“People need to understand that not one person can represent everyone,” she said. “Most are not extreme.”

Race and ethnicity were brought up as well. People wrote phrases such as “lazy,” “stupid,” and “terrorist.” Someone also wrote negative comments they heard about international students, like that they were not able to understand a lot.

Cruikshank said education would help people stop making these generalizations and stereotypes. He shared an instance when he was on spring break and met an undocumented immigrant in a detention center.

“I’m from Illinois; I don’t really deal with that kind of stuff,” he said. “It was interesting to see his side of the story, how he was going to be deported and was interrogated.”

A topic on how the media portrays certain races also came up.

“Bad guys in movies these days are made to look like they’re of Arabic descent, or Middle Eastern,” Lisack said.

Lisack also brought up how the media showed the recent violence between the police and unarmed black men.

“They show pictures of them in a negative light, and post pictures that are not all about the person,” she said.

Brittany Hirst, a sophomore psychology major, said she learned in her sociology class how society creates ideas, and when certain things confirm what people think, it gives them more of an excuse to perpetuate these stereotypes.

Chris Pickard, a sophomore political science major, said a way for people to combat these stereotypes is to talk to people who are different from them.

“You can’t judge a book by its cover,” Blackmore said.

On the economic background and class status books, people had written they heard things such as “low class,” “unintelligent,” and “rich equals ruthless, poor equals lazy.”

The question of why people might look down on those with more labor-intensive jobs such as a janitor or plumber was further looked into.

“People assume people who are ‘smart’ work in an office, and unintelligent people work with their hands and not their brain, even though that is so not true,” Hirst said.

Hirst said a common problem she sees when it comes to people’s perceptions of gay people is that sexuality is just about sex.

“When people say gay, they think it’s just about intercourse when it’s not just about that,” she said.

She said she saw this problem when parents protested the portrayal of gay people on TV shows or movies.

“They’ll say, ‘Why is there a gay person on this show?’” Hirst said. “‘They’re gonna show weird sex stuff.’”

Another book, Age and Maturity, brought up stereotypes such as younger people being immature and never growing up and that older people should not act childish.

Body Image and Mental Health was another book, with generalizations such as “mental struggle equals unintelligent” written on them.

Mackenzie Freund, a sophomore journalism major, said she has also heard people say those with mental illnesses are just using it as an excuse.

At the end of the discussions, participants were encouraged to write down their stories and experiences with stereotypes on paper that was put in the books.