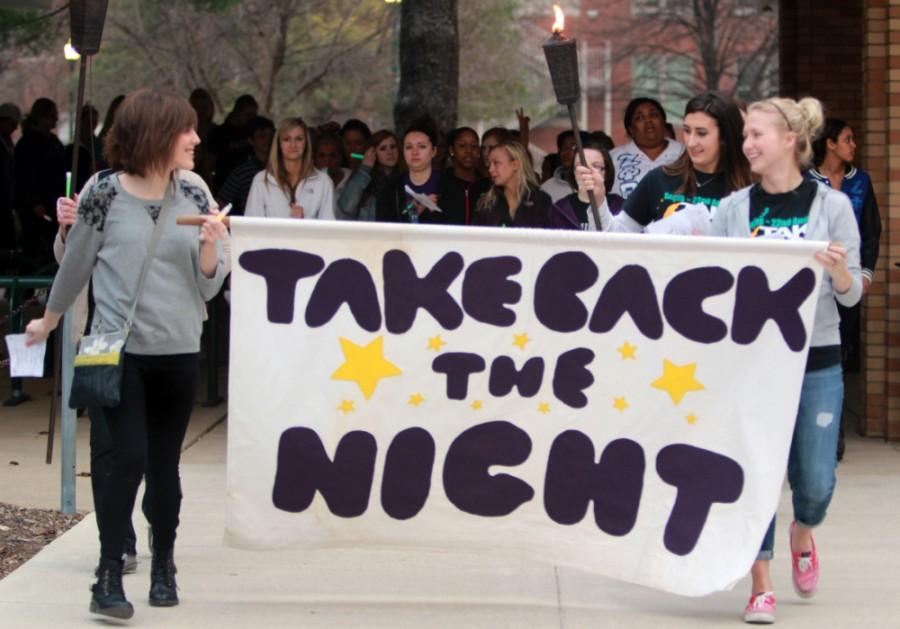 Students, faculty members and Charleston residents begin their march from the Martin Luther King Jr. University Union to Old Main during Take Back the Night on April 10, 2014. People joined in as the marchers passed by, shouting chants such as, "Whatever we wear, wherever we go, yes means yes and no means no."

Sexual Assault Counseling and Information Services will host their 24th annual march, “Take Back the Night” at 6 p.m. Thursday starting in the University Ballroom in the MLK Union.

Erin Walters, executive director of SACIS, said “Take Back the Night” originally started in the ‘70s, and was intended to focus on issues of sexual violence.

“It essentially focuses on the idea that we have the right to walk freely in the community without the threat of violence,” Walters said.

Twenty-four years ago, the staff of SACIS decided they wanted to have a “Take Back the Night” march in Charleston.

“It was something going on on campuses and communities throughout the United States, and became more of an established event around Illinois,” Walters said. “We thought Charleston should be a part of that movement.”

The evening will begin with live acoustic music by the Moondogs, followed by a talk by Walters, who is the keynote speaker.

“It will be an opportunity to come together, have everyone spend time together,” Walters said. “The Moondogs have been extremely supportive of SACIS, and offered to come out and provide music in support of our services. We want to take full advantage of that.”

Walters said she will talk about the reasons for the march, what it meant in the ‘70s, and how it relates to what the movement is today.

Walters said the likelihood of someone knowing a person affected by sexual violence is high.

“Sometimes it could be someone sitting in front of you, and you wouldn’t even know, because they don’t talk about it,” Walters said. “I just want to touch on some points students might want to hear, for survivors and their support system.”

Certain things can be done in regards to talking about sexual violence that can support survivors.

“We can have respect in conversations, being aware of the language we use,” Walters said. “Is it victim blaming? Objectifying?”

Walters said everyone could play a role in supporting those affected by sexual violence.

“The only person truly able to stop sexual violence is the offender, but we can intervene about it,” Walters said. “We can open up discussions, and on how we can be a part of the solution.”

The march will go down Booth Library, through the South Quad, and then through Old Main.

“It goes throughout campus,” Walters said.

Walters said the purpose of the march was awareness.

She said it was a way to support survivors who may not have disclosed what happened to them.

“It’s absolutely always a great event, a lot of student organizations join in,” she said. “Over 500 people have been in attendance in the past decade.”

Some factors, such as the weather or events on campus, have an impact on whether or not people join in the march.

“Other things are pulling people in different directions,” Walters said.

Despite this, Walters still expects a very positive turnout.

“I think it’s going to be a great night,” she said.

Cassie Buchman can be reached at [email protected]