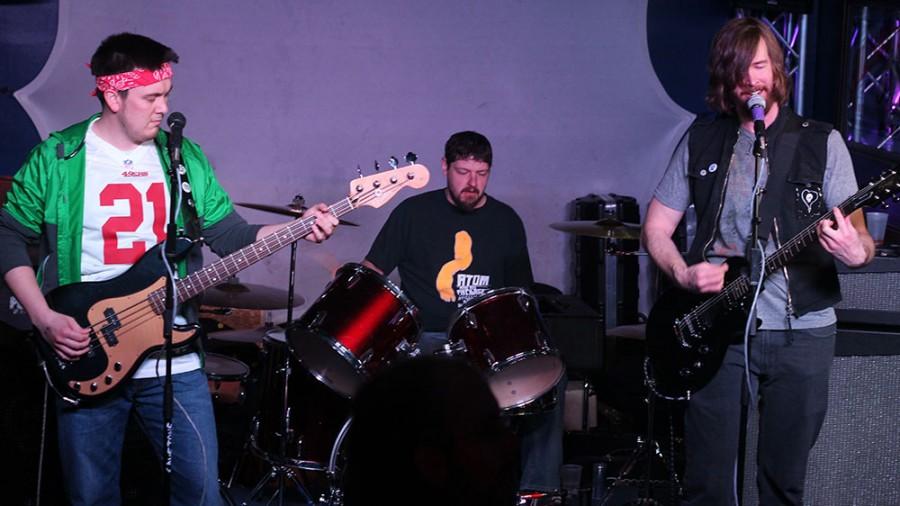 The Band The Tim Blys sings the batman theme at the Cavetone Records Seven Year Anniversary Spectacular at the Top of the Roc on Saturday.

Audience members were dancing and nodding their heads to the music as they celebrated Cavetone Records’ seven-year anniversary Friday evening at the Top of the Roc.

The Tim Blys was the first band to perform that night, singing both original songs and covers.

The audience could be seen mouthing the words and got even more excited as The Tim Blys sang pop culture songs such as the theme songs from TV shows “The King of the Hill,” “Teenage Ninja Mutant Turtles” and “Batman.”

They sang more personal songs as well, such as one about singer Matt Davis’ friend committing suicide.

Davis also sang another song he said was a true story.

Davis said working with Cavetone Records was a great experience.

“You could take anything away from working with Cavetone Records: delicious baked goods, Scott (Walus, owner) took off his shirt at one point,” he said. “They really wanted to work with us, and were friends of ours. It made the whole thing very pleasant.”

The next band, The Down-Fi, came to Charleston from Indianapolis. The group played some original songs, including “You Won’t Like It” and “Everything Now.”

The band played a song from singer Craig Willis Bell’s former band Rocket From the Tombs.

The members of The Down-Fi were different than usual, as its drummer of seven years, Blane Slaven, left after the birth of his second child.

In his place was Phillip Kitchel on the drums.

“Phil and I worked together before, and we learned he was available,” Bell said.

Bell said it was great to be part of the scene in Charleston.

“I wish we could find 100 towns like this. We always get really good energy,” he said. “People are not here to see or be seen. It’s what rock ‘n’ roll is about.”

The band members got louder and more intense as their set went on, with the guitarist even attempting to smash his guitar on the stage.

“We now know that Charleston is the dirt bag spy jazz capital of the world,” Walus said.

The Ex-Bombers announced a record coming out in May to the delight of the audience.

The band even performed a song with disco themes.

“Did you know the first five letters of discovery is disco?” Walus asked.

The Ex-Bombers also played covers of “Tainted Love” by Soft Cell and “Where is my Mind?” by the Pixies.

Keri Cousins, the drummer and singer from the Ex-Bombers and co-founder of Cavetone Records, said she did not originally expect Cavetone to have as many records.

“I’m happy we have so many releases,” she said. “Vinyl is slowly but surely getting bigger.”

The last two bands of the night, Wild Cat Daddies and Pat Boone’s Farm, both reunited at the anniversary concert.

Steve Andsager of the Wild Cat Daddies said the group reunited because Walus asked them to.

“Everything was perfect,” Andsager said. “It was just like deja vu. We just had a lot of fun playing together.”

He said all of the members had family, which led to the band not being able to play together.

“Life gets crazy,” he said.

Pat Boone’s Farm closed out the night and playing songs from when the band was still together, including one originally created when members were still in Normal.

“I love to support local bands,” she said.

She said she had gotten to know Walus and Cousins of Cavetone Records.

“They do a lot of cool things,” Thornton said. “Offering free music is just one of them.”