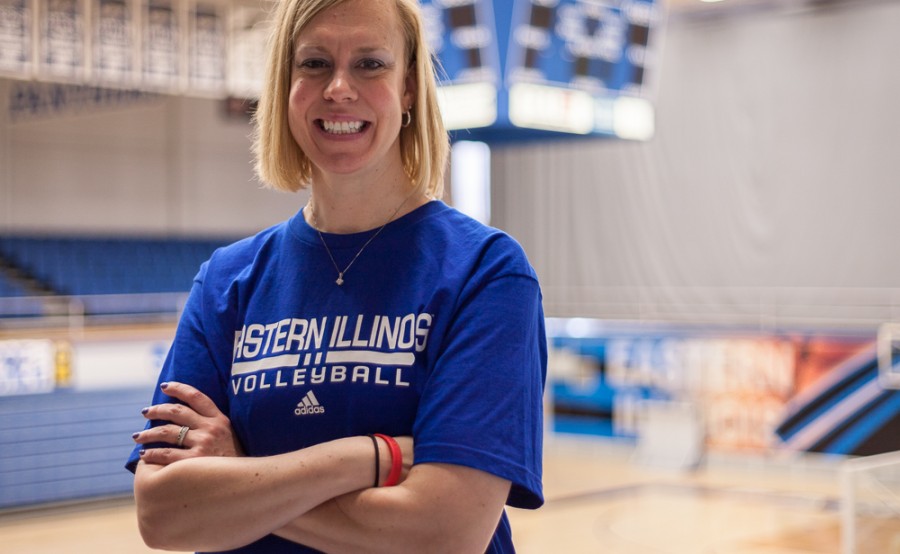 Updated on Monday at 9:50 p.m. with quotes from athletic director Tom Michael

A new era in Panther volleyball has begun after Sam Wolinski was hired as the team’s new coach on March 23.

“When Kate came back after the holidays, she came into the office and indicated, at that point in time, that she was going to resign her position,” Eastern athletic director Tom Michael said. “We were certainly disappointed to see her leave her spot, but I completely understood it was because of personal reasons and respected her decision.”

Wolinski takes over an Eastern team that had its season ended last year at the Ohio Valley Conference tournament semifinals and finished the season with a 15-16 record overall and 8-8 in OVC play under Price.

“We were impressed with her abilities were to evaluate talent and coach players, as well as her ability to interact with the student athletes,” Michael said. “We just felt very, very comfortable with her ability to relate to the current kids we have, go out and identify talent that can play at EIU.”

Wolinski recently arrived from Mississippi State, where she was an assistant coach for two years. During that tenure she helped the Bulldogs sign one of the top recruiting classes and also improve the team’s defense. In her second year, the Bulldogs increased their dig and blocking totals.

Friends and fellow volleyball coaches from around the area convinced her that the job was the right fit for her.

“It presented me with the opportunity to become a head coach again,” Wolinski said. “I had some friends, people from the area who are coaches at D-I schools, who I asked what they thought, and they agreed that it’d be a good fit for me.”

Research about the program and interviews with the administrative staff continued for the next three weeks, and eventually Wolinski was named as a head coach for the second time in her career but for the first time at the Division I level.

Wolinski, who grew up in the Buffalo area, was a head coach at Division III Rhodes College in Memphis, where she became the winningest coach in school history. She owned 261 victories in a 14-year career there, which included seven 20-win seasons.

Michael also made and received phone calls from coaches, who didn’t know Wolinski, personally, but had competed against her in the sport.

“Certainly her 14 years as a head coach was something that stood out,” Michael said. “As we made phone calls to talk to people that knew Sam, some of them didn’t but had seen her coach.”

Wolinski said her main goal is to win the OVC during her time at Eastern.

“Without a doubt, we’d love to be hosting the OVC championship come November,” Wolinski said. “We’d love to be that host team and make a bid to win the OVC Championship. I think we’ve got a lot of returning talent and the incoming freshman talent looks well.”

Eastern started practice last week and concluded Friday, with what Wolinski said was their best practice so far.

“I think the girls are working hard and getting used to me, how I am,” she said. “We’re trying to get everything else situated, trying to get things figured out.”

One of the areas the Panthers are trying to figure out is rebuilding their defense, which graduated two key players after last season. Wolinski said that to improve on that area that the Panthers will focus on two aspects: blocking and floor defense.

“You’ll probably see us do something different with blocking, than what has been done in the past, Wolinski said. “I think that’s one area the girls want to get better at. I think if we can become a better blocking team, we’ll have greater success, especially in OVC play.”

The second aspect, floor defense, has always been important to Wolinski.

“We were fortunate with the libero we had last year at Mississippi State, which I kind of oversaw,” Wolinski said. “We actually, at Friday morning’s practice, did some floor defense stuff and some defensive ball control theory to emphasize what we want to do.”

Wolinski also emphasized the importance of recruiting and said that all recruits that committed to Eastern for next fall, are still set on coming to Eastern. Recruiting for the team is now focused on 2016 and beyond.

“(This week) is a huge recruiting week in terms of qualifiers,” Wolinski said. “So between myself and our assistant coach, we’ll hit three qualifiers. I’ve talked to recruits for 2015, but I want to see them as well. I’ve also got offers for 2016, so I’ll evaluate those kids and get the ball rolling.”

Wolinski said that she wants all her players to enjoy every day they step foot on the floor. She tells them that each day is a great opportunity for the volleyball program and that they should celebrate every days, as they get after it.

“We’re not going to let the uncontrollables bother us.  We’re going to play hard, even if that means we’re going to lose,” Wolinski said. “We won’t win every match, but no matter what we’re still going to get after it and work hard every time.”

The Panthers will get their season underway in the fall.