Oroszova era comes to an end 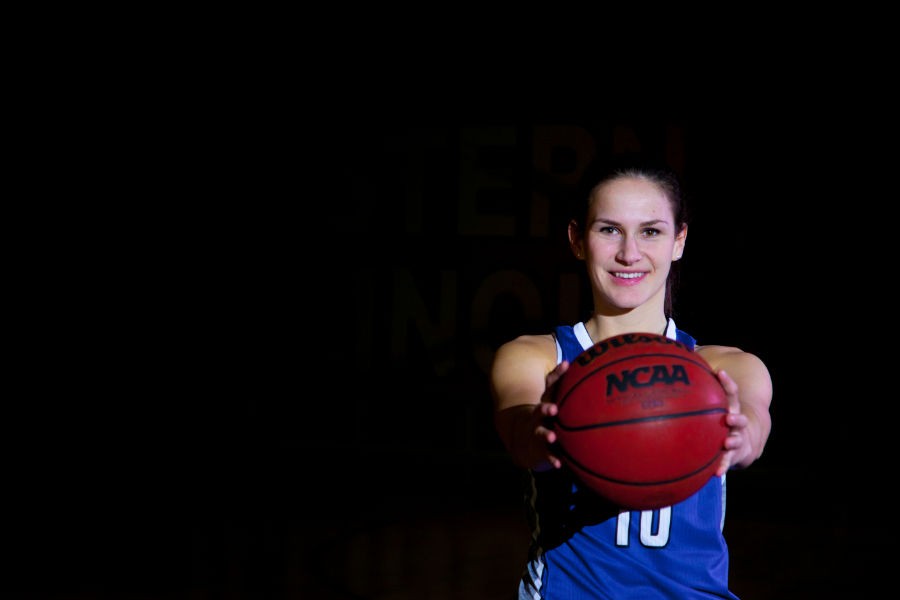 Sabina Oroszova, who had never been to the United States before coming to Eastern, finishes her collegiate basketball career.

Eastern women’s basketball senior Sabina Oroszova was born in Bratislava, Slovakia, and had never been to the United States before she came to Eastern.

She was lured to Eastern by former coach Brady Sallee, who now holds the same position at Ball State.

Sallee and his staff made the decision to recruit players overseas to better the program, so he put his assistant coach, Rachel Galligan, on the job.

Sallee knew some people overseas and they were able to show him and his staff quite a few kids that could be possible recruits.

After Sallee saw video, and Galligan went overseas to see Oroszova play in person, there was no doubt that they wanted Oroszova to be apart of Eastern Illinois.

“We quickly figured out that this was a kid we needed to bring into the program,” Sallee said. “It was a lot like we recruit anybody. We evaluated and identified. We visited, got in front of her and got on the phone with her. We sold her on Eastern Illinois and luckily she was sold on it. She ended up being a heck of a player and someone that had a great career.”

Ororszova built a strong relationship with Galligan over Skype and E-mail.

Galligan said they would talk almost every day with any different form of communication.

“Once she had made her decision, we continued to speak, because there was so much that had to get done to get her over here,” Galligan said. “We had a great relationship over those different forms of communication.”

Oroszova was not confident in her ability to speak the English language when she walked onto this campus as a freshman, but she said she understood about 90 percent of it.

It took her about two or three months to get comfortable with English. She said she would just be listening and trying to catch some words and phrases that were being used for the first couple months.

“My teammates, my coaches and my teachers helped me a lot with getting confident speaking English and showed me that it is okay to make mistakes, because that’s how we learn,” she said. “I remember sometimes they would make me speak in front of a whole group, or read to kids in school to put me in a situation where I had to talk no matter what. I was mad, but now I am thankful they did it.”

Oroszova added that back in Slovakia, the English lessons were not very effective in school. She had to learn it by herself and practice it by talking to her American teammates back at home.

She would have to deal with a change of culture as well, especially the food part she said.

“It was somewhat challenging,” she said. “The food here and overseas is very different, so it took me a while to figure out what I like and what I don’t like. I love the mentality here and also the university and people around.”

Oroszova came into Eastern and contributed right away. She averaged 16.2 minutes a game and started nine of the 31 games she played in. She also averaged 4.7 points per game her freshman year and shot 33 percent from the floor.

Oroszova’s physical play was what Sallee liked from her, but he said physical play isn’t something you see from European players.

“You usually see finesse and a little bit more skill,” he said. “But, you don’t see a physicality, which we saw in ‘Sabi’. She was willing to take a beating and still play through it. She rebounded the ball. She played almost an American type of game when it came to the physicality.”

Oroszova quickly grew up her sophomore year at Eastern, under then-coach Lee Buchanan. She started 31 games and played 22 minutes. She upped her field goal percentage by 10 percent and averaged 5.9 points a game.

Eastern hired a new coach in Debbie Black, who would be Oroszova’s third coach in three years.

This year she averaged 34 minutes per game and led the team in points and rebounds again with 15.7 points and 10.1 rebounds. She also was named to the first team women’s basketball All-OVC

Although Oroszova had a good career, she said it was tough playing with three different coaches in four years, but it had some benefits.

“It was difficult,” she said. “Not only because it was hard for me emotionally, since I really liked the coaching staff my freshman year, but also to get used to different coaching styles and systems. IT was difficult to recognize what each coach expects from you and what you expect from them. On the other hand, every coach taught me something different and new what I will always benefit from.”

Oroszova has been able to visit states such as California, Texas, Florida and Arizona, which she said she would not have been able to see if she did not come here.

Oroszova hit a buzzer-beating game winning shot on Jan. 3, something she never did before in her basketball career.

“It felt amazing watching my teammates running towards me, screaming and jumping, because we just won a game,” she said.

Lennox said Oroszova took her under her wing to show her what Eastern is all about and to help her get acclimated with the college life.

“’Sabs’ was the best teammate I could ask for,” she said. “She literally took me under her wing and was always there for me whenever I needed. My transfer to the US was definitely easier due to the help of ‘Sabs’.”

Oroszova said her mentality is the one thing that changed through her four-year career at Eastern. She said there is space for improvement, but her time at Eastern gives her hope for the future.

“Another thing that changed for me is the ability to adjust easily,” she said. “Before I came here, I thought I’ll stay here for a year, just to see how it is. Now after four years, I am not ready to leave. I have made way too many memories and connections with great people, which will last very long.”

She is on schedule to graduate in May with a degree in business management.