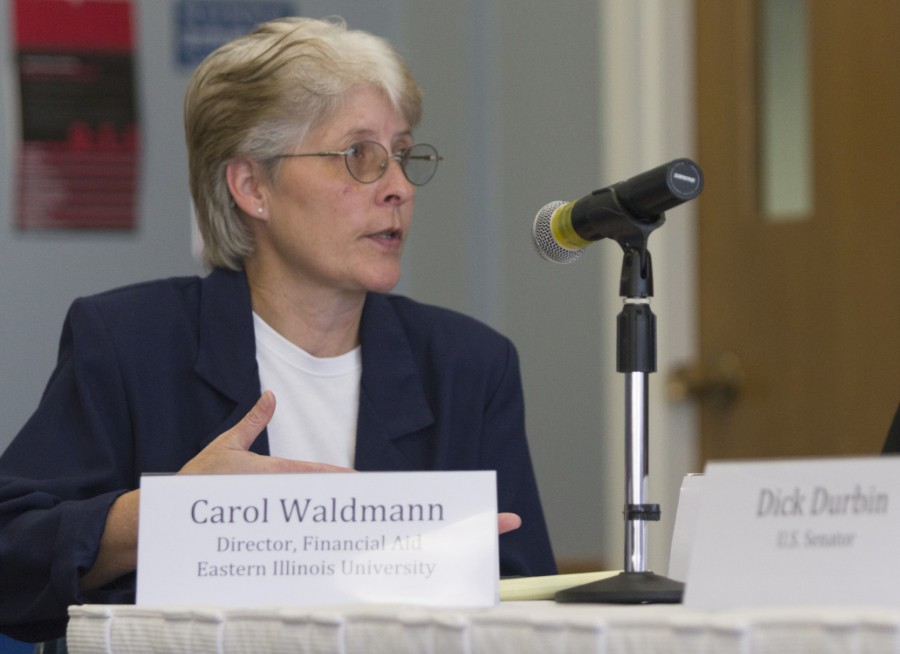 Carol Waldmann, who has been working in the business of financial aid for 31 years, has allocating scholarships and grant money down to a simple checklist.

Waldmann is the interim director of financial aid, and has 18 other staff members who keep track of award money and grants.

“I’ve been doing this so long it’s second nature to me,” Waldmann said.

Waldmann, who is the woman partly responsible for how much students get in grant and scholarship money, said the federal government gives the university a certain amount of funds and then the university decides how much money they can have to distribute out to the 8,913 students.

Pell and MAP Grants are based off what students fill in their FAFSA, once those documents are given to Eastern’s financial aid office, Waldmann then can begin to distribute the money to as many students as possible.

Eastern is given about $120 million in funds to award students.

“I put together a strategy to try and spread the money as far as I can and to as many students as I can,” Waldmann said.

Waldmann said she has a mock program that tests how much she can award students to see how much she can hand out, once that computes in the proper fashion, the actual award amounts can be given.

“You have to over-commit in all the funding that you do have,” she said. “Because not everyone that we award aid money to is going to accept.”

Waldmann said the office has a system called Enrollment Management, which tells them what a student’s EFC, or Estimated Family Contribution, is and that tells her how far she needs to stretch the money awarded. She awards as much money as she can and once the money is gone, students can also apply to be on a waitlist for funding.

“I hate doing waitlists because it makes students anxious and they may not know their amount until June,” Waldmann said.

However, having to tell a student that no more funds are left to award is the hardest aspect of Waldmann’s job.

“I want everyone to get a college education and graduate, it makes me sad,” she said.

Waldmann said every student has different requirements award eligibility, some students may only get Pell and MAP Grants, and others may only be eligible for loans. She said the money could come from multiple areas and not just Eastern.

Depending on the types of aid that come in for students on a different date, she may have to adjust. She said if a student has received more than what is needed she will take away a loan first.

When some students get many scholarships and pell grants, they are way over cost, and that is allowable because Pell is student specific, Waldmann said.

Everything is based off what a student’s EFC is because she does not want to short-change students, those who have an EFC of zero have the highest amount of need, while those with a high EFC amount will get the least amount.

That being said, Eastern has an award package called the Panther Promise, which is for middle-income students who fall in the family income range of $31,000 to $71,000 can be awarded up to $2,500.

The funds can also be renewed yearly, Waldmann said.

Another difficult aspect about Waldmann’s job is the new federal regulation put into effect by President Barack Obama.

Three years ago, President Obama signed into effect the Consolidations Appropriations Act, which has significantly impacted the federal Pell Grant Program. Students must now complete their undergraduate educational career in less than six years; otherwise, their Pell Grant will no longer be available.

“That did have an impact on some of our students,” Waldmann said.

MAP Grants are also unavailable to students once they have reached 135 semester hours, which includes hours accumulated from community colleges. Students also have limits when it comes to how much they can draw from federal loans.

Waldmann said over the course working all of her years in financial aid, she has seen a numerous amount of students come and go, but the most rewarding experience for her is knowing that she has helped someone graduate.

“They got their degree, that gives us all a sense of pride in what we do and why we do it,” Waldmann said.