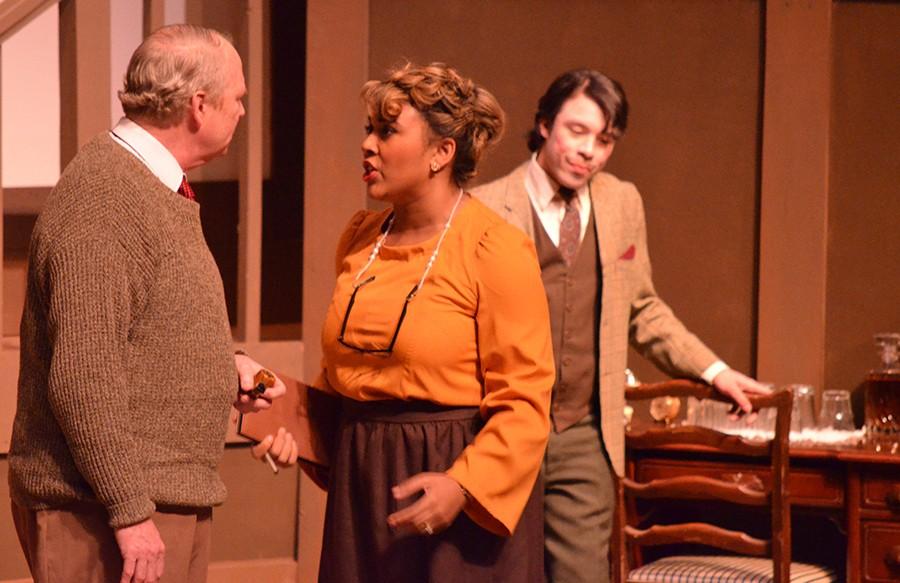 Single piano keys echo “Three Blind Mice” from beyond the door when suddenly the room goes black; a Monkswell Manor guest drops to the floor, and when the lights return, Mollie Ralston shrieks in horror to find the woman dead.

This is the closing of Act I in Agatha Christie’s 1952 play “The Mousetrap,” which had its opening night Thursday in The Theatre of the Doudna Fine Arts Center.

Mollie (Christina Peter) runs the boarding house where the sophisticated, sassy and humorously pretentious Mrs. Boyle (Leah Davis) is murdered while a snowstorm blows outside, trapping the guests in for a night of tense arguments and accusations.

Detective Trotter (Jacob Cole / understudy Tom Travis) arrives during the storm and prods the guests for information along with Mollie and her husband Giles (Sullivan Peterson-Quinn), who has bursts of anger and suspicion himself throughout the evening.

All of the drama occurs in the wooden lodge-style parlor; a snowdrift falls behind the window and whistles through the room, and the radio plays from the corner in key scenes, which at first irritates Mrs. Boyle while she writes letters near the fireplace.

Christopher Wren (Christopher Sanderson), whose sanity is ambiguous throughout the ordeal, plays with the fire poker from time to time frightening the other guests.

Each character adds bits of comedy into the plot; for example, the mysterious foreign traveller Paravicini (Rico Torres) sings sarcastically to Trotter, “Little Bo Policeman has lost his skis and doesn’t know where to find them. Leave them alone and they’ll come home dragging a murderer behind them.”

Guest director Marnie Andrews said the quirkiness of the characters is what draws the audience into the play, and finding themselves in the play is what keeps them.

“Either as an outsider, or trying to make things right and having all kinds of things gone wrong, or a marriage spat, they’ll see something of themselves,” Andrews said.

She said “The Mousetrap” is the longest running play in history, having run for 63 years.

“The reason it’s run so well is she has that gift of mixing humor and suspense, Agatha Christie, and we don’t get to do in college theaters very often this style of work,” Andrews said. “It’s a very specific, sort of ‘Downton Abbey’ style.”

McDaniel said the character stuck out to her from the beginning, and she was able to draw on experiences from her own life to channel her character, though it caused her some nerves at first.

“The whole time I was trying to figure out who did it and trying to go about simply solving the crime myself, and while we were working more and more on it, there were a few days I would struggle with personal connections I had with my character that were very similar to things that I have experienced in my own life,” McDaniel said.

Andrews said her favorite part of directing the play was working with students; she said they were not the types to become preoccupied with status as can often happen in theater.

“You don’t always get a group that works this well together, that has that kind of willingness to dedicate themselves to the group,” she said. “There was a real unselfishness about this group, and it didn’t matter if some were more experienced than others.”

The production will continue at 7:30 p.m. Friday and Saturday and at 2 p.m. Sunday. Tickets are $5 for students, $10 for seniors and employees and $12 for the general public.