Longest –running play to be performed at Doudna 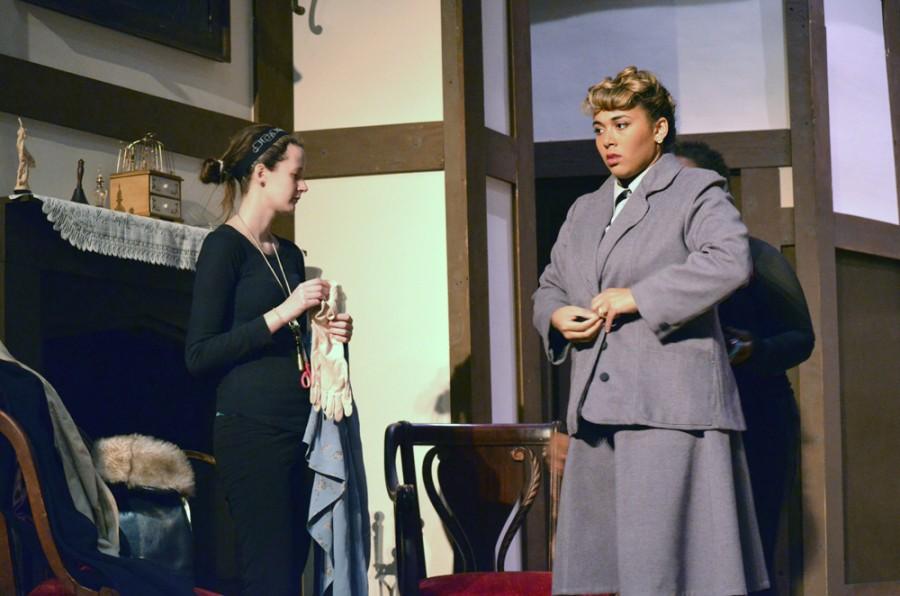 Kaycie Brauer, a senior english and costume crew runner, helps Leah Davis, a junior communications major, get into costume Wednesday during the tech rehearsal for The Mousetrap in the Doudna Fine Arts Center.

The world’s longest running play, “The Mousetrap,” is coming to Eastern this weekend, bringing a “whodunnit” plot twist along with it.

The Mousetrap is one of Agatha Christie’s most popular works and has been around for more than 60 years.  The murder mystery first premiered in London in 1952 and has had over 20,000 showings.

Guest Director Marnie Andrews has experience when it comes to putting on a production, but she’s a newcomer to campus.  She said this is the first time she has directed a mystery.

“You spend the first act laughing and the second act on the edge of your seat,” Andrews said.

She said the actors dove right in and bounced off each other and getting ideas.

Leah Davis, a junior communications major, plays the role of Mrs. Boyle, who is one of the main characters. She said this is her fifth Eastern production.

“I think my favorite part about the play is the excitement for someone who’s never seen or read it before because there are so many unexpected changes,” Davis said.  “It’s really well written.”

Davis said the play has been a good experience and she is honored to be working with Andrews.

Jake Cole, a senior theatre major, has been in many performances before, so he is not a stranger to the stage.  As the lead, this will be his ninth major production at Eastern.

“There’s a lot of serious moments, but there’s a lot of laughs in there. It’s a diverse piece of theatre,” Cole said.  “It’s a joy to be working on the longest-running play of all time.”

Cole said he studied up on his character once he received the part.  He said he researched the time period and read other novels by Christie.

Morgan Reidy, a senior theatre major, is the stage manager for “The Mousetrap.”  She is the director’s right-hand man and takes care of every little detail that goes into the making of a play.

“I love seeing other people’s reaction even though I’m behind them,” Reidy said.  “The characters are fun to watch.”

“The Mousetrap” will perform from Thursday until Saturday at 7:30 p.m. in the Theatre of the Doudna Fine Arts Center, and 2 p.m. Sunday in the Theatre.

Tickets for the play are $12 to the general public, $10 for seniors, and $5 for students. They are available for purchase online or at the Doudna Box Office.