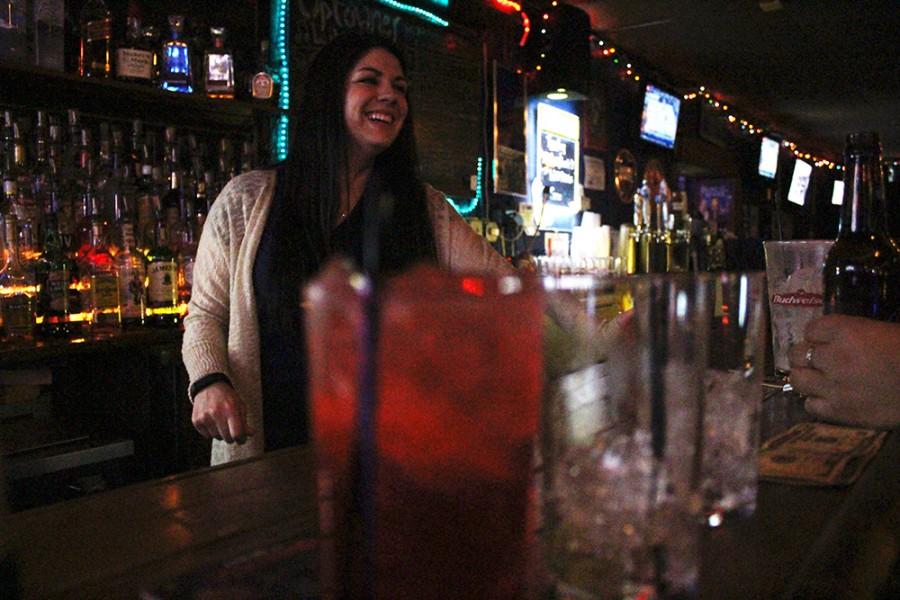 Kaity Nieft said the craziest story she has of her time bartending is when a 50-year-old woman stripped all of her clothes off and tried to go streaking in the bar.

“She wasn’t completely drunk, but she had been drinking,” Nieft said. “We had to grab her, tell her to put on all her clothes. We were telling her to stop. Everyone in the place was laughing.”

“She was a good sport about it,” Nieft said. “I’ve never seen her again.”

Nieft has her hands full juggling her classes.

“It’s stressful sometimes,” she said. “Especially when I close really late, then getting up for class at 9 a.m.”

A usual night shift for Nieft starts at 8:30 p.m. and ends at 2 a.m. Weekends are usually the busiest time for the Uptowner, with weekdays being pretty slow except for regular customers.

Two bartenders usually work weekends, and people start coming in around 11 or 11:30 p.m.

A lot of the customers are able to get a lot of drinking done in the span of an hour.

“I’ve noticed a lot of people are a lot drunker at 1 a.m. than at 2 a.m.,” Nieft said. “I swear, they realize ‘Oh my God, another hour!’ Ever since the bars have been open until 2 a.m., a lot more people have been puking and things like that.”

Nieft has been working at the Uptowner for almost two years. She said she decided to become a bartender because she really likes people and wanted to interact with them.

“Bartending seemed like a good way to do it,” she said. “I’ve made a lot of friends I wouldn’t normally have.”

Nieft’s responsibilities include serving drinks, water for those who need it, making sure everything is under control and no underage drinkers are present, and being friendly and nice.

“My patience has gone down since being here,” Nieft said. “ I get a little on edge from dealing with people who don’t make sense.”

She has seen people throw a garbage can and people fall asleep at the bar.

“It’s really awkward to wake them up, and be like, ‘Are you okay?’” she said.

One of the problems Nieft faces is not being taken seriously if she acts too nicely.

To deal with problematic customers, Nieft said she starts out by being nice.

“If they are about to get sick, I say ‘How about a water first, we have really good water,’” she said.

Nieft said she always tries the nice way first, and if that does not work, she will get stricter.

Some of the busiest days at the Uptowner happen when a band is playing.

Bands include Squealer, a cover band that plays rock, and Bone Jugs and Harmony, that plays jugs and country music.

“There’s not just one type of band that plays,” Nieft said.

A lot of the customers are right out of college.

“A lot of them work a lot, and don’t want to go to someplace with a lot of people,”  Nieft said. “They want one on one interaction, where they don’t have to scream.”

She said the laid-back atmosphere of the Uptowner could be an aspect that drew them in.

The Uptowner also has its share of regular customers that come in.

Nieft said she sees them a lot, even outside of work, and has maintained a friendly relationships that way, which she her co-workers.

“The girls that work with me, we’re all actually good friends; we go to the gym together, hang out outside of work,” Nieft said. “We help each other out, because we all understand what we’re going through.”

Nieft said her bartending job has taught her responsibility and how to act in awkward situations.

“When getting to know people, it’s important not to just talk to people but to get to know everyone by being really sociable,” she said.

To Nieft, being a good bartender means being responsible and hardworking.