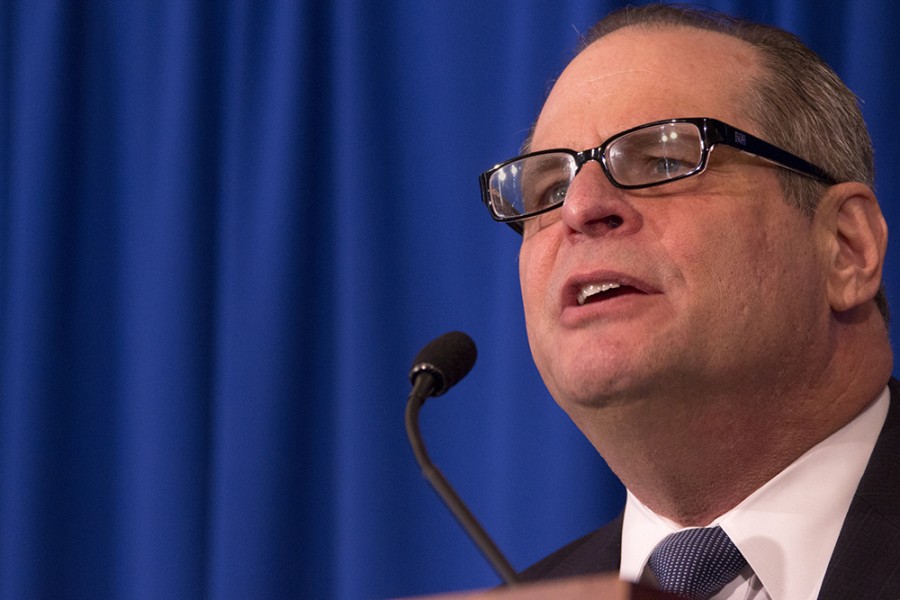 David Glassman was approved as Eastern's next president succeeding Bill Perry on Monday during the Board of Trustees meeting in the University Ballroom of the Martin Luther King Jr. University Union.

David Glassman was named Eastern’s next president during the Board of Trustees meeting Monday, where he said he intends to remain enthusiastic amidst challenges facing higher education in Illinois.

“I look forward to the opportunities and meeting the challenges we have before us as we continue the unbelievable tradition and fine student-centered education that we provide students in our region and in our state.”

Glassman said the first area of focus as president will be learning the culture of the campus.

“First, I certainly have to learn the culture; all universities are unique and the culture is something that is very important to understand in order to move forward in activities and initiatives,” Glassman said.

Glassman said he previously spent time in Springfield talking with officials and public legislators about Eastern’s importance to the region, as well as the state.

He also said Eastern’s recent enrollment troubles are reflective of other both public and private institutions.

“The solutions we’ve identified at Eastern, they may in fact be unique, and so I have to start looking at what is the plan, how do we leverage our strengths at Eastern?” Glassman said. “How do we take those things that are so important to our students and move them forward so that we can stabilize and reverse the enrollment and continue the Eastern growth?”

Glassman said a multi-step plan is needed to combat the challenges of enrollment.

Location, awards, staff, experiences, and residential life are all aspects he said should be strongly marketed.

“Strong marketing and branding (an) image is going to be necessary for us to move forward and increase our enrollment,” he said.

Glassman said the experiences surrounding Eastern is something to promote.

“The experience here at Eastern is second-to-none, and that ‘s something that the people of Illinois and our surrounding communities and the collar states need to know,” he said.

“But at the same time, accountability and affordability is something that we need to maintain and that we need to be the strongest advocates possible for higher education in Springfield,” Glassman said. “The presidents of the public institutions in Illinois must come together and talk about the defendable mission that we have in higher education in the state of Illinois.”

Kristopher Goetz, Board of Trustees chairman announced two members who were appointed to the board, including Timothy Burke and Catie Witt.

“Mr. Burke has a storied history in leadership and of service to EIU,” Goetz said. “He’s currently a member of the board of directors of the health care services corporation. He has an outstanding legacy of service to EIU.”

Additionally, Robert Webb, head of the finance and audit committee said One of their areas of focus is the appropriation for next year, with the figure on the table right now at a 30 percent reduction.

“In all my years and four years in higher education, there’s never been a proposed reduction of that magnitude,” Webb said. “We’re hopeful that our legislators working with our governor will be able to find ways of modifying that.”