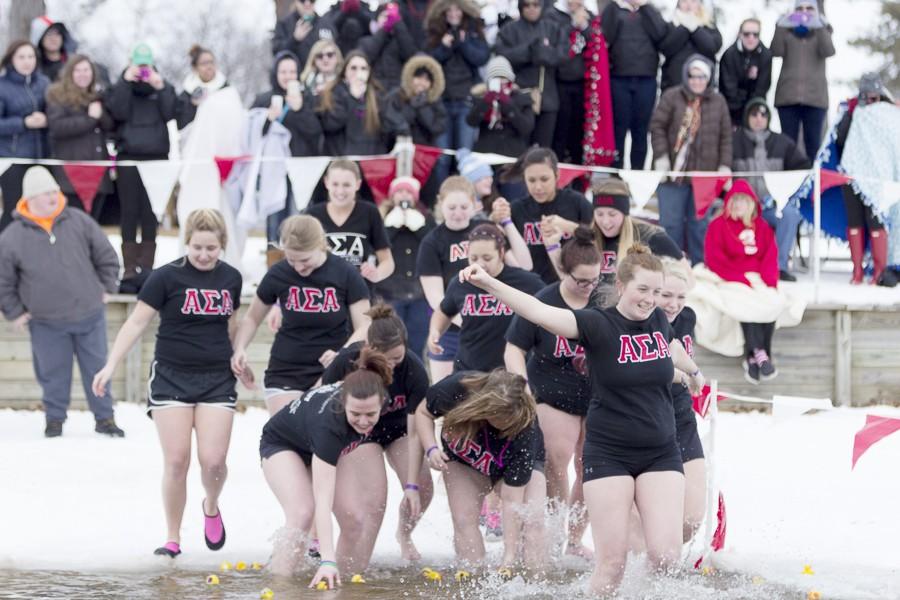 Members of the Alpha Sigma Alpha sorority enter the icy water as their sisters cheer from the shore during the Law Enforcement Torch Run Polar Plunge on Saturday at Lake Sara in Effingham. Special Olympics is one of the organizations that the sorority gives to nationally.

Both screaming and cheering could be heard at Saturday’s Polar Plunge as people jumped, plunged and dove into the icy water of Lake Sara in Effingham to raise money for the Special Olympics.

About 247 people participated in the plunge, and the preliminary amount all of the volunteers raised was $53,173. This amount is considered preliminary because people can donate until the end of April.

People willing to take jump into the below-freezing waters at the plunge varied from children to college students to adults.

Megan Tolan, a junior psychology major, said she made sure to come prepared with her sorority, Alpha Sigma Alpha.

“I prepared by bringing a whole suitcase full of clothes,” Tolan said. “I expect to get the wind knocked out of me.”

She said one woman from her sorority raised $1,000.

Lauren Schaffer, a senior special and elementary education major, said she did the Polar Plunge last year, and part of the reason she went was because of her major.

“It makes you feel accomplished,” she said.

Schaffer said she raised $350 last year by asking for donations from her sorority, Kappa Delta, as well as her family and friends.

“To all the people who donated, I get to be like, ‘I ran into freezing water because you donated,’” she said.

Some people had personal reasons for plunging.

Brandi Carroll, a Sullivan resident, said for eight years she has come to support her son with special needs, who has participated in the Special Olympics for 10 years.

Carroll also wore tiger face makeup to support her son, who does not plunge, but still pretended to be a wild game hunter.

“We like to have team costumes,” she said. “This year we went as his prey.”

Many other people attended the fundraiser in costumes, such as the Effingham Police Department, who came as characters in different Will Ferrell movies.

Danny Lake, an Effingham Police Department officer, dressed as Mugatu from the movie “Zoolander,” said the department has participated for five or six years.

Also dressed in costumes, Cynthia Sidwell and Destiny Miller of Altamont, dressed in hula costumes with grass skirts and coconut bras over their regular clothes.

“We dressed like this for fun, something different,” Sidwell said. “It doesn’t really go with snow and ice.”

Miller said she was nervous and excited for the plunge.

“I’m expecting to freeze,” she said.

Before the plunge, the volunteers all mingled at a cabin eating donuts and drinking coffee and hot chocolate.

People were also working on cutting a square of ice out of Lake Sara to make room for those going in the water. About 5 to 6 inches of snow were cut, and the plunge officially started at noon.

The first team ran in the water dressed in beads, boas and colorful masks to the cheers and applause of the spectators.

104.3 The Party radio station sponsored and announced the teams for part of the plunge.

Kurtis Allen, the program director for 104.3, said it was a tradition for the station to sponsor the Special Olympics.

“This is our sixth time taking the plunge,” he said. “It’s always fun, always a great time.”

He said it was one of their big events for 104.3, and they have always been involved with special needs programs.

“We spread the word about it for two months and try to raise money,” he said. “We’re very proud to be a part of this event.”

As the plungers emerged from the water, many were visibly cold and shaking, yelling, “I can’t feel my legs!” as they ran to change out of their clothes.

Some people dove head first in the water, and others splashed their friends going in to the delight of the spectators.

One of these spectators was Sherry Wei, an Effingham resident whose husband was taking part in the polar plunge.

Rescue engines, fire engines, ambulances, and other emergency personnel were on hand all day in case they were needed.

Justin Sandars, a Marshall resident, said he could not feel anything after the plunge.

Sandars said he would do the plunge again.

“I would do it for the reason, yes, but I won’t do it for pleasure,” he said.

Jessica Jones, from Mattoon, said the water was nice, but the temperature after the plunge was not.

“Not having shoes was not very good,” she said.

After the plunge was the Post-Plunge, where raffle prizes were given out and awards were given for the most money raised in different categories.

Sigma Rho Epsilon, partnered with the Student Council for Exceptional Children, raised a total of $8,717 and won two awards, one for raising the most money for groups of five to 15, and another for the College Cup Challenge.

“We got more people than last year,” she said. “We did pretty good.”