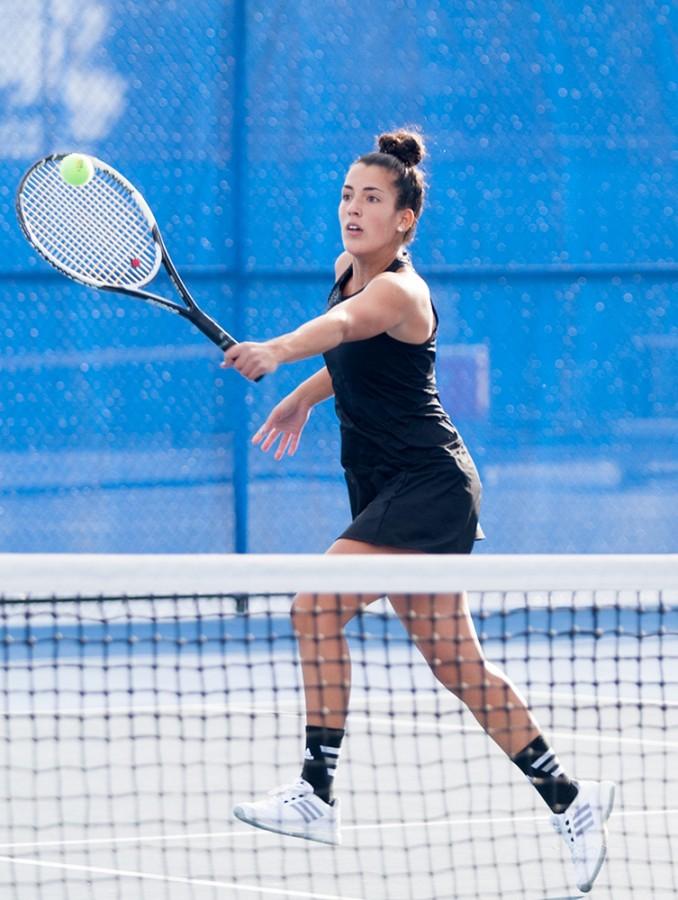 The Eastern women’s tennis team dropped to 2-3 on the season after losing matches against University of Evansville and Southern Illinois University Carbondale Sunday and Monday, respectively.

Rescheduled from Feb. 13, the Panthers lost a close match against Evansville in Evansville, Ind. with a score of 4-3.

Junior Ali Foster and senior Sephora Boulbahaiem were able to pick up wins in singles against Evansville, with both winning in straight sets.

Eastern sophomore Kamile Stadalninkaite fell to Evansville senior Mina Milovic 7-5, 6-3, in a match that would determine the final outcome.

The Panthers earned the doubles-point for the match by winning at the No. 2 and No. 3 spots against Evansville.

The No. 2 doubles team of Foster and Kimbrough picked up a win defeating Craig and junior Gaby Fifer, 6-0.

Finally, the No. 3 doubles team of Iden and Stadalninkaite also picked up a win defeating Moreno and Brguljan, 6-1.

Eastern coach John Blackburn was impressed with the way Foster, Boulbahaiem and Kimbrough played over the weekend.

“I think Ali and Sephora had great weekends in singles along with Hannah and Ali playing very strong doubles,” he said. “Ali and Sephora played their best tennis of the season in singles this weekend. I’m excited about the direction they’re going in.”

In their second match rescheduled from Saturday, Panthers lost 5-2 against SIU in Carbondale Monday.

Foster and Boulbahaiem were once again able to pick up wins in singles winning in straight sets again.

The Panthers did not get the doubles-point against SIU, because they were only able to win one out of the three double’s matches.

Iden and Stadalninkaite played a strong match, but came short and were defeated, 7-5, by Golovkina and senior Arianda Cairo Baza.

With the two losses, Blackburn said there are some things they can improve on heading into the week of practice.

“There are some approaches to singles that we have worked on that we didn’t execute as well as we would have liked last weekend,” he said. “We will try to improve on that in practice this week.”

Panthers will continue their season Friday and Sunday when they face Butler University in Indianapolis, Ind. and Western Illinois University in Galesburg.