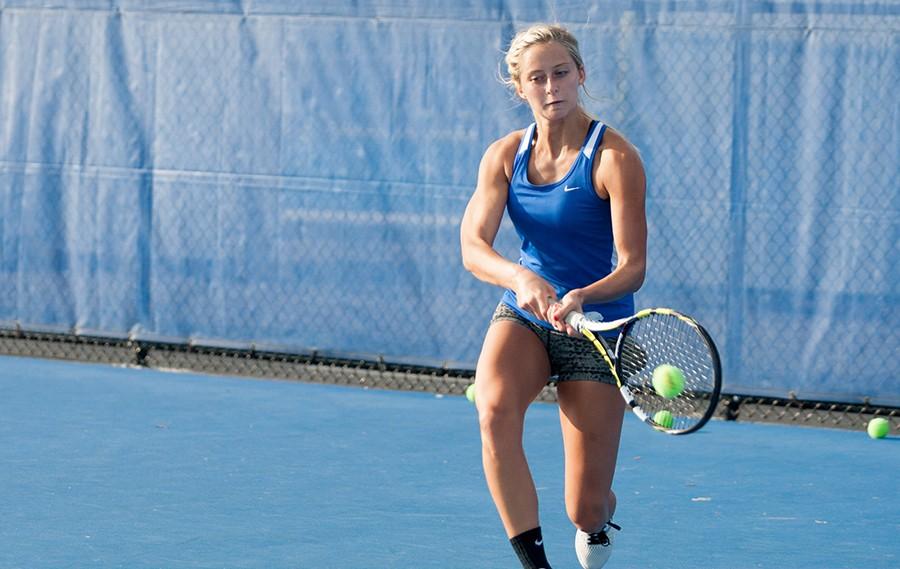 Junior Ali Foster returns the ball during tennis practice on Sept. 30 at the Darling Courts.

To some tennis may just be a game, but to Ali Foster, of Plainfield, Ill., tennis is everything.

Foster, a junior sociology major, has been playing tennis her entire life, beginning at the age of five.

It was a sport she watched as child, and she realized that was something she wanted to do.

Foster played singles at Plainfield Central High School and since coming to Eastern, she has improved greatly.

Before coming to Eastern, Foster did not know what to expect from playing tennis in Division I, but she knew it was going to be different and she knew there would challenges.

“My high school team wasn’t as close, I would say, as a college team, but it’s more fun because you get to travel a lot, going to other schools and other states,” Foster said. “It’s very time consuming, but it’s also nice that you always have something to do and there’s not a lot of down time.”

Coming into the 2014-15 season, Foster had specific goals she wanted to accomplish for the year.

“This year I wanted to play higher than I played last year and a lot of other goals are smaller, just working on my game,” Foster said.  “They have been coming along really well, and I have been playing better than I have in the past.”

Foster has had strong performances in all of her singles matches this season.

Foster has also had success in doubles with partner junior Hannah Kimbrough with both getting wins against Dayton, 6-2; Illinois State, 6-1; and Evansville, 6-0.

Foster has noticed that she has been playing well against other opponents in singles and said her confidence has been positively affected from it.

“I think with each match you play you get more confident because it’s like practice going into the next match,” Foster said. “You learn what to do and what not to do from the previous match, and you learn what you need to work on.”

Foster’s confidence and improvements over the course of her time playing at Eastern brought her one of her favorite moments since beginning her college career.

“We recently played Dayton, and I think that was a really good match for me,” Foster said.  “It was a long match and her style is not really mine, and I ended up winning the match, and it gave me more confidence because in the past I would not have won the match, but this year I was able to win.”

Coach Blackburn said Foster’s play this year has been the best she has had at Eastern.

“I think it’s been one of her strongest years,” Blackburn said. “She has gotten off to a really good start in singles and doubles, and she has been gradually improving every year she has been here”.

Blackburn also noted the growth Foster has had as both a teammate and team role model since coming to play at Eastern.

“Ali has been a great leader for us for the last couple of years, and she has really grown into a strong leader for us,” Blackburn said.  “She has excellent interpersonal skills that allow her to get on a teammate’s level and help them through things and relate to them.  She has been a very good role model and leader for the team this year.”

Foster and the Panthers will continue their season Friday and Sunday when they face Butler University in Indianapolis, Ind. and Western Illinois University in Macomb, Ill.