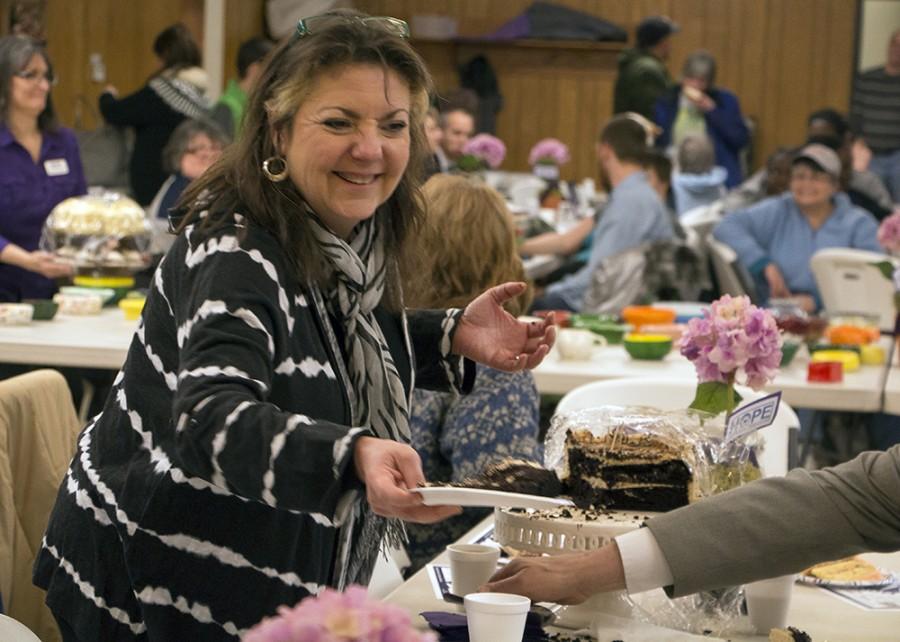 Mary Bower passes out double chocolate cake with caramel cream to friends at the Bowls of HOPE fundraiser Feb.17 at the St. Charles Borromeo Church. The "Bowls of Fun" event this Monday will contribute to the next Bowls of HOPE in early 2016.

Soup, desserts and laughs were shared among attendees at the Bowls of HOPE fundraiser Tuesday in Moriarty Hall at the St. Charles Borromeo Church.

The Housing, Outreach, Prevention and Education Center (or HOPE) of East Central Illinois hosted the fundraiser. This local organization hosts various programs to provide support to survivors of domestic violence.

Althea Pendergast, the executive director of HOPE, said the 12th annual fundraiser helps finance all the programs the center provides such as a 24-hour hotline, an emergency shelter, counseling, children’s advocacy and education.

Jessie Duzan-Johnson, a board member at HOPE, said the staff will not know how much money was raised until later because they will keep receiving donations in the mail.

A new addition to the fundraiser was HOPE for Change in which attendees were encouraged to take a painted jar, fill it with change and turn it in when it is full.

All the change donated will help fund a playground at the children’s center.

The fundraiser consisted of a soup dinner, music by Motherlode, a raffle and a dessert auction. Attendees also got to take home a handcrafted bowl by local artists.

The hall looked like a big family reunion with community members exchanging laughs, hugs and desserts.

Mary Kay Spannagel, of Charleston, said she has been to every Bowls of HOPE fundraiser and loves the vegetable beef soup from What’s Cookin’.

“It’s always a good social event and a good cause,” she said.

Beth Centers, of Charleston, said she came to the fundraiser because she was looking into volunteering at HOPE.

As each dessert was auctioned off, audible “oohs” and “ahhs” could be heard from the attendees.

Brock Esarey won an orange crunch cake and shared it with other attendees.

His sister, Savannah Esarey, a junior family and consumer sciences major, said she has been to every Bowls of HOPE fundraiser with her family.

They bid on desserts every year and share with others, she said. One year, they paid about $100 for a dessert. This year, they went home with the cake and cinnamon rolls.

Esarey said she wants to work for the organization one day.

Mary Bower, of Charleston, also handed out pieces of double chocolate cake with caramel cream to other attendees.

He said he was planning on sharing with his family members and was not going to eat all of it himself.

Amanda Wilkinson can be reached at 581-2812 or [email protected]