Students to ‘bare it all’ for charity cause 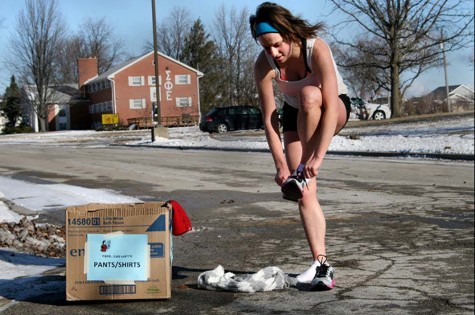 a shirt alongside her best friend.

Rekasius, an Eastern graduate, said she enjoyed the Nearly Naked Run and would do it again because it supports a good cause.

The second annual Nearly Naked 5k run, which is an event in which students can take off their clothes as they jog for charity, being hosted by Student Government at 9 a.m. Saturday on the Panther Trail.

The race will begin at Wesley United Methodist Church located on 2206 Fourth Street.

Rekasius said every fourth of a mile at the checkpoint she had to take off an article of clothing to be donated.

“Oh my gosh, I have to do this with my best friend, it was so cold,” she said.

When Rekasius finally finished the run three minutes apart from her friend, she was wearing nothing but a tank top and shorts.

“I just tell myself I’m going to be warm soon—it’s a mindset thing,” she said.

However, for Rekasius, the cold does not bother her because she is used to doing athletic sports in winter weather; she is also going to participate in a Polar Plunge at Illinois State University.

Rekasius, who participates in many charity events, said she would definitely do the event again and would like to dress up in a funny costume; she said at the end of the run she remembers seeing a boy wearing a tutu when he finished.

“I tried to run as fast as I could (because) I remember my parents screaming my name at the end,” she said.

Reggie Thedford, the student body president, said the event used to be a mile jog, but it switched to a 5k for this year’s event. He said since the event is in February, students will be able to wear as many layers as they want and take off their clothes while running.

Thedford said this is the first time he will be participating in the run, so he will wear some extra clothes to take off and donate while jogging.

Donations will be going to Standing Stone, which is a non-profit ministry with food, clothing and furniture items, as well as the Wesley Methodist church. Shoes will be donated to USAgain. USAgain is a for-profit company that collects unwanted textiles and resells them in the United States and Abroad.

“It’s a fun way to get involved with a service project—it’s unique,” Thedford said.

The goal is to provide clothing items to those who are underprivileged and to help others who may not have a chance of purchasing winter gear.

Those who wish to participate in the run can register online or at the event.