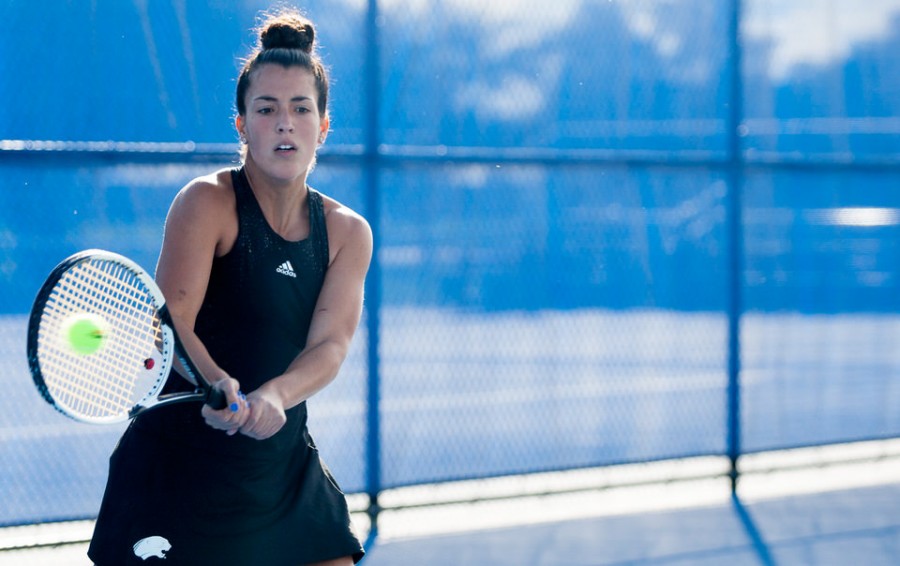 The Eastern women’s tennis team defeated Illinois State University 6-1 on Saturday in Normal improving to 2-1 on the season.

Sophomore Kamile Stadalninkaite, junior Hannah Kimbrough, and senior Sephora Boulbahaiem picked up wins in singles matches to clinch and secure a Panther lead over the Redbirds.

“Three of the key performances for us in singles were Kamile Stadalninkaite’s win to give us the 4th point we needed to clinch the team win and Sephora Boulbahaiem and Hannah Kimbrough’s 3 set wins,” coach John Blackburn said.

Stadalninkaite defeated Sophomore Natalia Parchowska in the No. 6 singles match in straight sets, 6-2, 6-2.

Freshman Grace Summers and junior Ali Foster also won in singles at the No. 2 and No.4 spots both in straight sets.

All three doubles teams picked up victories for the Panthers.

“We are definitely making progress in doubles,” Blackburn said. “We saw some improvements from our last match and we’ll continue to work on playing stronger the next time we go out.”

The No. 1 doubles team of Boulbahaiem and Summers defeated Ilves and Haycock with a score of 6-3.

The No. 2 doubles team of Foster and Kimbrough defeated Scudiero and Shulman with a score of 6-1.

The Panthers won their second-straight match with a win over Illinois State University, after defeating University of Dayton 4-3.

Blackburn said he believes the team has improved as a whole with this win.

“I thought it was our most complete match of the season, we got strong performances all through the lineup.” Blackburn said. “We played the big points better this time out, there were a lot of close matches, but we were able to perform well in the big situations.”

The Panthers will travel to Evansville, Ind. on Saturday to take on the University of Evansville.

Blackburn said he is seeing progress in the team and how well they have come together as a whole this season.

“We have a very close team this year and it definitely has shown in competition this spring, they really support and fight for each other,” Blackburn said.