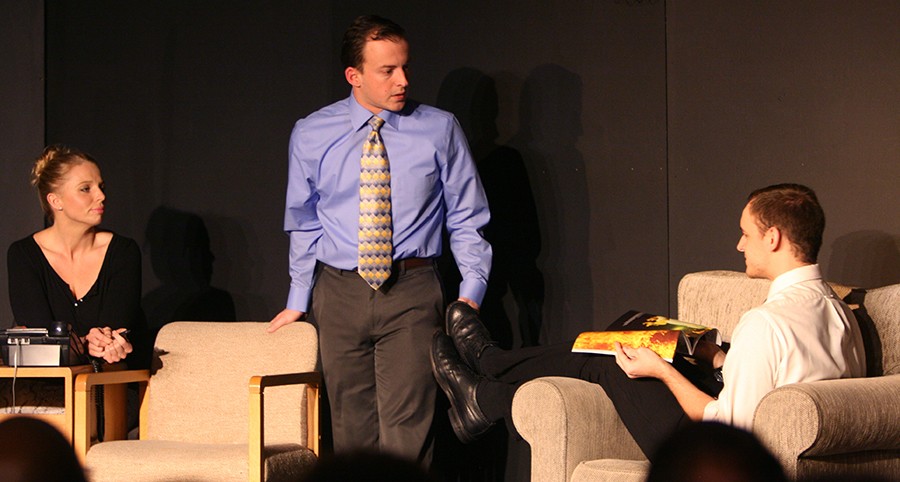 The Charleston Community Theatre had a well-deserved sold-out opening night of the play “Fat Pig” on Friday at the Tarble Arts Center. The play is intense without being too melodramatic and has humorous parts as well.

The show opens with Tom, an average 20-something-year-old man, and Helen, a plus-sized librarian, meeting for the first time in an over-crowded restaurant. The lack of seats in the restaurant forces them to sit together, and after a few moments of awkwardness, they end up getting to know each other, and eventually end up dating.

Along with the problems that come with a regular relationship, Tom and Helen must also contend with the hostile comments and judgments coming from Tom’s friend, Carter, and on-and-off girlfriend Jeannie.

The play is well cast, and the actors seem comfortable in their roles, especially Matt Mattingly as Tom, who adequately showed his character’s nervous personality and hesitance to do the right thing.

Each actor seems to know their character well, and what acting choices to make in order to exhibit their personalities.

Another actor who exemplified his character well was Aaron Due as Carter, as he was able to play his character in his most obnoxious, immature moments as well as softer, more sentimental moments such as when Carter talked about the struggles of growing up with his overweight mother.

The conflict of the play lies in Tom’s inability to make a decision in the face of his co-workers judgment of Helen, despite his love for her.

All of the actors were skilled when it came to gauging how their characters interacted and making the dialogue realistic. Although Carter and Jeannie’s hostility and rude comments about Helen can at time seem over-the-top, Due and Beka Murphy, who played Jeannie, were able to say their lines in ways that did not make what they were saying melodramatic or over-the-top.

The audience was able to see how Jeannie’s insecurity over being rejected in favor of a bigger woman like Helen drove her to the anger she showed toward Tom.

Likewise, Due was able to show how Carter’s embarrassment over his overweight mother turned him into the shallow shell of a human being he was during an emotional scene with Tom.

While the acting in the play was never over-the-top, the flipside to this was there were areas where the emotion displayed by the actors could have been heightened. While more intimate scenes, such as the aforementioned scene with Carter and Tom, and especially the scenes between Tom and Helen, were believable because they used subtle emotion, there were scenes where the extra emotion could have helped.

For instance, there is a scene where Tom and Jeannie are fighting, which ends in Jeannie slapping Tom. The slap comes out of nowhere as Jeannie’s anger did not seem to escalate enough to the point where she would slap Tom, and the slap itself did not seem very forceful, although the way Tom reacted to it made it seem very painful.

The character of Helen, played by Holly Allen, was, with Tom, one of the more complex characters in the play. Allen played Helen with a lot of empathy, and was able to portray much of her vulnerability, while still showing how she was able to be strong in the face of what she was dealing with. There were a few lines she could have delivered with more conviction, especially in the emotional final scene where she offers to change her weight for Tom, but altogether her portrayal of Helen was believable and touching.