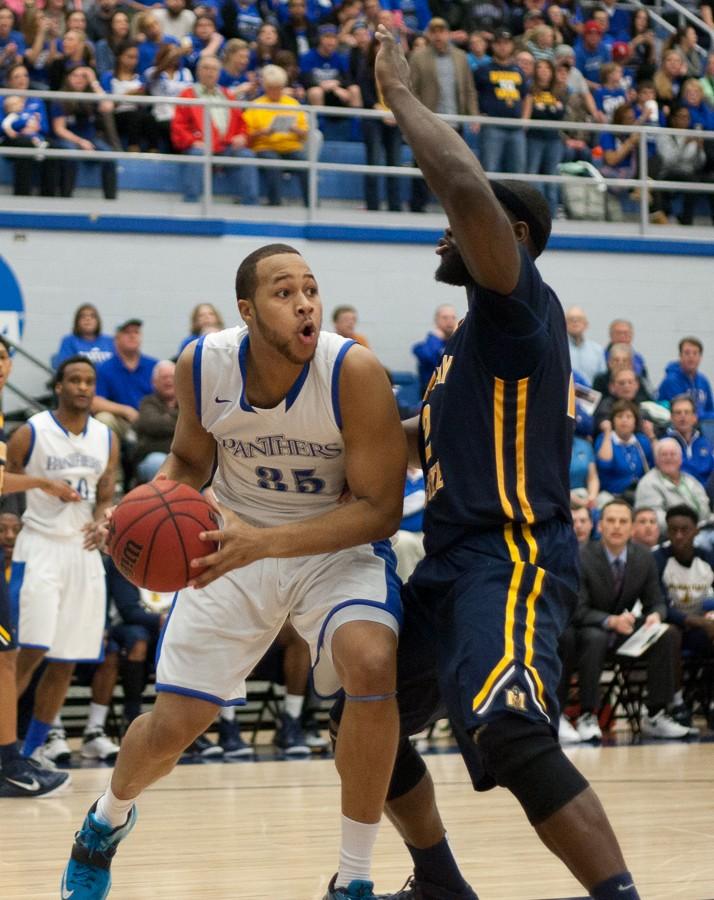 Junior forward Chris Olivier attempts to go around a Murray State player during the Panthers' 77-62 loss to the Racers on Thursday at Lantz Arena. Olivier scored 17 points during the game.

The Racers (16-4) continued to a 13-game win streak while halting the Panthers’ (12-7) run at nine games. Murray State now remains the only remaining undefeated team in Ohio Valley Conference play.

“We found out how good you have to be if you are going to win this league,” Eastern coach Jay Spoonhour said.

Payne scored a game-high 33 points while also recording five rebounds and four assists. He was 3-of-5 from 3-point range and 12-of-20 overall from the floor.

Payne scores 19.1 points per game this season. The sophomore that seemed to score at will is overall the third highest scoring player in the conference.

“I hope there were about 30 NBA scouts here tonight to watch that,” Spoonhour said. “That was pretty impressive.”

The Panthers allowed the Racers to shoot 51.7 percent from the floor in the first half. Eastern finished the half shooting 35.7 percent and connecting on 2-of-12 from beyond the arc.

“I thought we had some open looks that we needed to go down,” Spoonhour said. “When they didn’t go down, I thought ‘Oh this isn’t going to be very good.’”

Olivier and junior forward Trae Anderson were the only Panthers to score double digits.

Anderson found himself in position to succeed in isolation by backing his defender all the way to the basket.

“I just kind of got it going at one point,” Anderson said.

Anderson finished the night with 16 points and four rebounds.

Senior forward Jonathan Fairell led both teams with seven rebounds in the first half for the Racers. He averages 6.3 rebounds per game but pulled down 12 boards Thursday night.

Payne came back from halftime looking to score. He scored 10 of the Racer’s first 11 points of the second half.

With 6:15 left to go, Payne and senior forward Jarvis Williams had outscored the Panthers 26-24.

Murray State’s largest lead was 24 points following the run led by Payne and highlighted by two dunks from Williams.

Williams ended the game with 15 points and nine rebounds on 7-of-14 shooting.

Midway through the second half the Panthers went on a 13-4 run led by Olivier and junior forward Trae Anderson.

During this run, both Fairell and Williams committed their fifth and final fouls.

The Racers were able to outlast the Panthers’ late second half effort to nab their 13th straight win.

The seats of Lantz Arena were filled to the point where students and other fans were standing or sitting along the railing of the second level.

Both Spoonhour and Murray State coach Steve Prohm said they were impressed with the crowd and atmosphere of Lantz on Thursday.

“Shoot. I hope everybody saw that and realized what it was like,” Prohm said. “That is the toughest place we have played.”

“This is the first step. We aren’t a finished product,” he said. “They are a better team than us. We could play really well and still possibly not beat them.”

Spoonhour said the team just has to go back to work and figure out how to win more games.

Eastern now sits at 6-1 in the conference while Murray State secured the number one spot in the OVC by remaining undefeated.

The Panthers’ next game is against Austin Peay University at 3:15 pm on Saturday inside Lantz Arena.