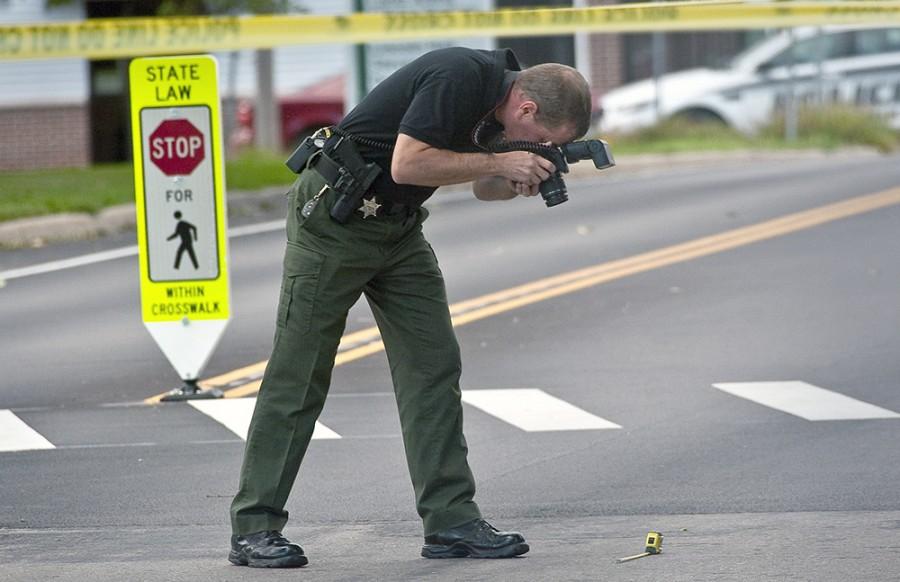 An Illinois State Trooper with the traffic crash and reconstruction unit analyzes the scene of a hit and run accident on Fourth Street between Lincoln Hall and McAfee Gym. The accident took place on Sept. 21, 2014.

An Eastern student reported a hit and run Tuesday, when a man allegedly failed to yield the right of way to a pedestrian who said she was struck at a crosswalk located at Fourth Street and Grant Avenue at about 9 a.m.

Citlally Fabela, a sophomore biology major, said she was on her long board skating to Stevenson Hall when she was struck by the vehicle.

“I put my hands out so the side of his car hit me and he ran over my foot,” she said. “He kept going and then paused for a split second and kept going.”

Fabela said that in a moment of adrenaline, she took to her long board again, and followed the driver to a parking lot where she confronted him.

“It’s something I thought would never happen because I was being careful,” she said.

A similar incident occurred Sept. 21, 2014 when Alexandria Ward, a sophomore special education major, was airlifted to the Carle Foundation Hospital after a truck struck her at the same crosswalk and neglected to stop.

Ward said although it is unfortunate, she is inclined to believe similar instances happen frequently in areas with high pedestrian and vehicular traffic.

“I kind of am (surprised), and I’m kind of not actually,” she said.  “I’ve seen the way people drive on campus.”

David Chambers, Charleston Police Department deputy chief, has seen enough accidents to form an opinion of his own about how these accidents come about, and he fears people may have forgotten the basic safety guidelines they are taught as children.

“Look both ways before you cross the street,” he said. “When you get to a street, take five seconds out of your life and look at your environment.”

Too often, Chambers said he sees pedestrians crossing the street with their noses shoved in books and buried in their cell phones.

Ward sustained a severe concussion and two torn ligaments, for which she still attends physical therapy. She was shaken by the incident, though she said it scares her more to know it could have been worse.

“After going through a traumatic event, you actually go into a stage called hyper vigilance where you are more aware in the stressful situation where you were,” she said.

It’s not just her behavior she has a heightened awareness of, either.

“I’ve seen so many students almost get hit and not really even know that they did because they’re on their cell phones or not paying attention in general,” she said. “More people need to be in the stage of hyper vigilance.”

Fabela said she experienced a similar sense of anxiety once she came down from the initial adrenaline rush.

“It could always be worse. If I didn’t stop myself, I don’t know what would have happened,” she said. “Getting to class late is not worth possibly killing someone.”

If a driver does strike a pedestrian with their vehicle, however, Chambers said they are likely to get off with a standard traffic citation.

“Assuming you simply hit someone in a crosswalk, it’s going to be a traffic citation,” he said. “There are things that can aggravate that.”

If it is later discovered that what Chambers refers to as a “voluntary action” was involved – such as alcohol, drugs, or the use of mobile devices – the charges can begin to pile up.

“If you’re driving with due diligence and you make an honest-to-God mistake, the key principle to criminal liability is that there has to be a voluntary act,” he said.

Despite road-lines, signs, lights and speed signs, neither Chambers nor Ward believe blame can be placed solely on the driver or the pedestrian.

“We have the laws in place to control the flow of traffic and to make both vehicular traffic and pedestrian traffic safe to where nobody in a car is getting hurt and no pedestrians are getting hurt,” he said. “But when it comes right down to it, the nuts and the bolts of it, the burden is really on those that are there in the scenario.”

Ward said she has seen the aftermath of her accident affect the way her friends and family drive, but she has also begun to change the way she thinks about herself as a pedestrian.