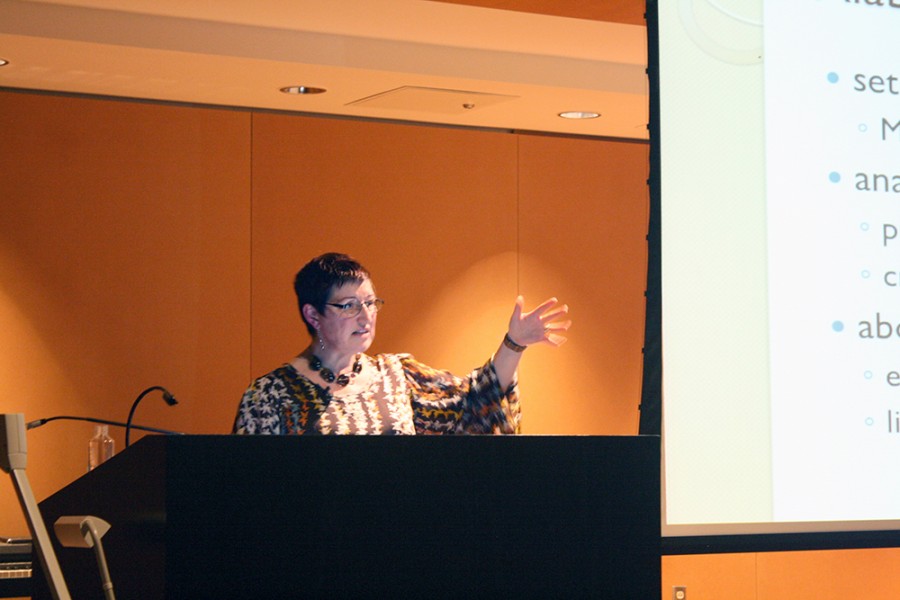 Pro-abortion rights and anti-abortion stances have been discussed in the past, but Jeannie Ludlow, associate professor in English and coordinator of women studies, offered a new perspective on the subject.

Ludlow gave her speech on Undue Burdens and Personal Responsibility: Literary Pregnancy and Abortion in the Post-Choice Decade in the United States on Wednesday in the Doudna Fine Arts Center.

Ludlow holds a doctorate degree in American Culture Studies and worked in an abortion clinic for 12 years.

“I thought, working in the clinic, it was my job to comfort the patients but it wasn’t my job to tell a woman what experiences she was going to have,” Ludlow said.

She went on to explain she was pro-abortion rights before working in the clinic, but soon realized neither side was more important.

“I believe we should stop looking at pro-choice or pro-life and we need to start looking at peoples lives,” Ludlow said. “We need to stop hurting people.”

In her speech, Ludlow explained it was not about pro-abortion rights and anti-abortion, but the experiences the women had when getting abortions.

“I tend to think of it as an argument; (kind of) like an argument on a sitcom that isn’t funny anymore,” Ludlow said during her lecture.

She said we live in the post-choice decade, and the goal is to change the power system.

Ludlow went more in detail on her subject by using works of literature to emphasize her points of view during her lecture.

She used works such as “Father of the Four Passages,” written by Lois-Ann Yamanaka in 2001, and “Blues for an Alabama Sky,” a play written by Pearl Cleage in 1995.

“Father of the Four Passages,” is about a woman who wrote a letter to each of her unborn children, which she signed with love. She also provided the age she was when she gave birth.

The story is about a young woman’s life experiences, explaining the reasoning behind her abortions throughout.

“Blues for an Alabama Sky” is set in the 1930s, featuring an African American woman who gets pregnant by an Italian man named, Leland.  She then visits Sam, a Harlem Doctor, and gets an abortion for other reasons.

Lisa Rhodes, a communication studies major, said she had not given much taught about how literary text might affect abortion.

“I think the deconstruction of pro-life as a binary is what struck me the most,” said Niehaus.