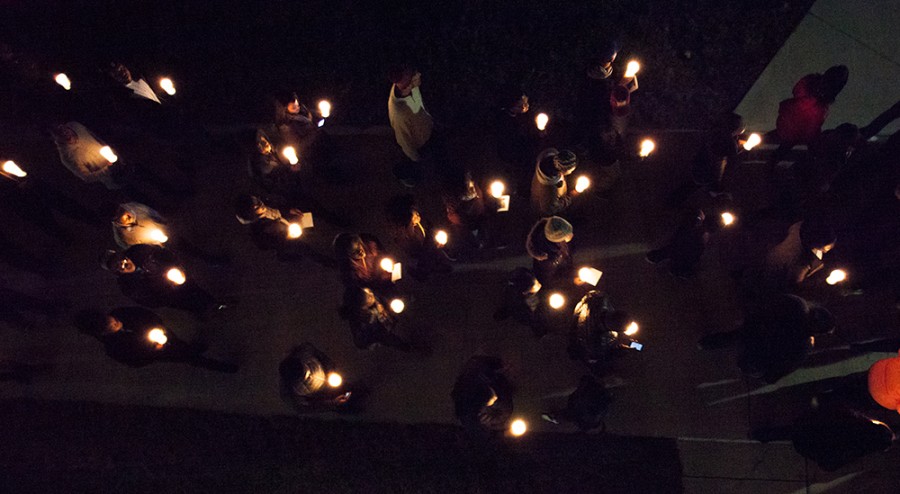 Nearly 70 individuals walked closely together clutching Styrofoam cups with candles lit on the inside. Small hushed voices sang hymns of “We Shall Overcome” and “Let it Shine” for the Martin Luther King Jr. Vigil and March Monday evening.

Hosted by Alpha Phi Alpha fraternity, the event brought together men and women of all ages and races together. Members from other Greek organizations were also present such as Phi Kappa Theta fraternity, Sigma Gamma Rho sorority, Zeta Phi Beta sorority and many more.

King was also a member of the Alpha Phi Alpha fraternity.

Members from the different organizations all agreed the commemoration showed unity amongst not only humans of different cultural backgrounds, but also the Greek organizations.

The event also incorporated a praise dance from eight of the Apostolic Christians in Today’s Society Anointed Worshipers. All eight of the women danced and twirled around the stage with emotion.

Marlon Williams, Reverend and police officer, gave the keynote address speaking on stereotypes, including his thoughts on the Michael Brown case.

Williams said he believes society is disconnected from God because of racism.

Toward the end of the night there were two awards given out to those who have made impacts as students and faculty members.

Phillip Love, the Alpha Phi Alpha president, said the event had a great turnout. To Love, this day meant freedom and equality because King stood for many things. Therefore, having a day to honor King holds a special meaning for him.

Allen Potter, the president of Phi Kappa Theta fraternity, said this was the first time he and his organization came to the event.

Potter said King was an important individual to everyone, since he was a key with human rights individual. Potter said his organization also participated in a Martin Luther King Jr. Day of Service earlier, which nearly their entire chapter was present for.

Potter expressed interest in coming out to support members of the National Pan-Hellenic Council for their future events, as well as participating in the next Martin Luther King Jr. Vigil. He said he would like to attend events because it showed Greek Unity and it is a great way for students to get involved with the campus and community.

“It’s definitely something I want to continue,” Potter said.