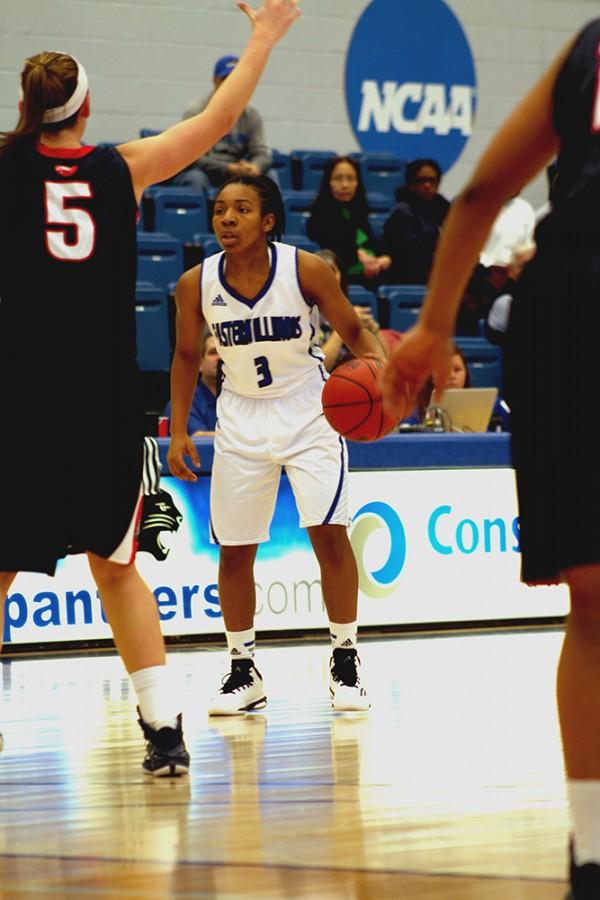 Arnisha Thomas and Bh’rea Griffin led the Eastern women’s basketball team to a 68-42 win over Eastern Kentucky on Thursday in Richmond, Kentucky.

Griffin, who came off the bench for the Panthers, scored 19 points on 7-of-9 shooting and 4-of-4 from the 3-point line, and Eastern coach Debbie Black was impressed with the way Griffin came out and played in the win.

“I think she made some huge baskets for us again,” Black said. “She is my 6th Man of the Year right now. She comes in and does some nice things for us and that really helps.”

With seven minutes left in the first half, Eastern Kentucky and Eastern were tied at 16 and then the Panthers went on an 11-2 run to end the half to give them a 27-18 lead, which was led by Griffin and Thomas.

Heading into the locker room, Black said she couldn’t even remember how the Panthers ended up on their run to end the half.

“I just remember saying ‘We are playing terrible basketball and we’re up by nine’,” she said. “From the get-go I thought we really could run on this team. I didn’t like the way we started. We looked slow.”

The Panthers came out firing on all cylinders in the second half and started it with a 23-6 to push the lead to their to 26 with seven minutes left in the half.

Eastern Kentucky would cut the lead to 18 late in the second half, but that is as close as it would get.

Heading into this game, the Panthers were just 1-8 on the road this season, before this win, including 0-1 in conference play.

Griffin, a freshman, said getting a win on the road especially against a good team is a great step forward.

“We’ve been playing well at home, we just had to bring it away on the road,” she said. “We will use this confidence to bring the energy into the next few games.”

Eastern Kentucky would have a rough day shooting the ball as they shot 26.6 percent in the game.

It’s second leading scorer Shameekia Murray scored 18 points, but was only held to four points in seven minutes of action in the first half due to foul trouble.

Also the Colonels’ leading scorer Michaela Hunter was also in foul trouble in the first half.

She only scored two points and played six minutes in the first half. Hunter committed a foul 31 seconds into the seconds of the second half and was forced to sit on the bench with three fouls for the next five minutes.

Black understood the importance of Eastern Kentucky’s two best players having to sit on the bench the majority of the first half and had to take full advantage of that, which her team did.

“I will take that matchup anytime, those two sitting on the bench,” she said. “They really rely on them.”

Sabina Oroszova had another double-digit scoring day with 14 points on 6-of-12 shooting and as a team the Panthers shot 51 percent from the floor.

Eastern will travel to Morehead State on Saturday to face the Eagles.