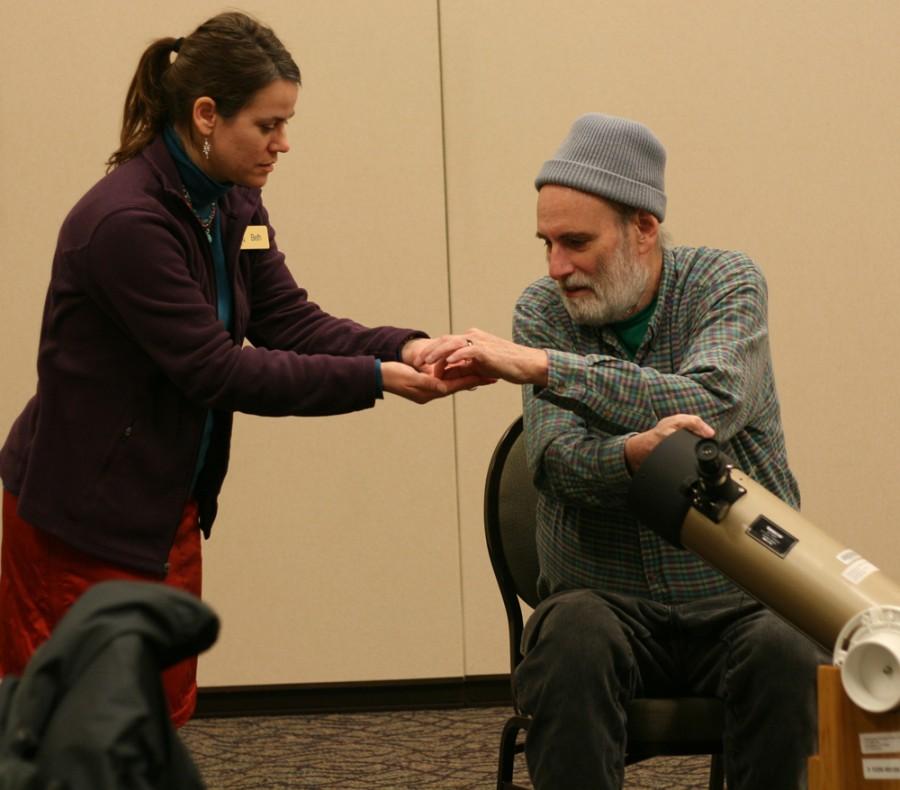 First grade student Bryan Dixon peeked eagerly into a telescope despite the cloudy night sky to see what he could find.

Brian was one eager participant in the Charleston Carnegie Public Library’s Astronomy Night on Monday.

“He has been watching ‘Cosmos’ everyday,” said his mother Asha Dixon. “He’s really interested in the planets. He’s been teaching me.”

His parents encouraged this interest by buying him his own telescope.

“We had to return it because all we could see is the moon, but we wanted to see something else,” Dixon said. “It’s really nice that you can borrow a telescope from the library.”

Bryan had been “wanting to come to Astronomy Night for a while” but it kept getting canceled because of the clouds, Dixon said.

Although there were also clouds Monday night, the event was still in session because it had been canceled three times prior, and because of the recent holiday season, in case someone has received a telescope as a gift.

The event, originally supposed to be outside, was held inside a meeting room because of the clouds.

Astronomy Night was the idea of Tim Camden, an astronomy enthusiast.

“It sounded like a good idea and we’ve gone with it once a month,” said Beth Lugar, youth services manager.

In addition to the Astronomy Nights, the library also allows those interested to check out a telescope.

“If people can find the moon (on a telescope), they can check one out,” Lugar said.

Although Monday evening was cloudy, on a good night outside Lugar said participants can see the different colors of the nebulas even with obstacles in the way such as light pollution and the town itself.

On normal nights, the attendance for an Astronomy Night can vary depending on the weather. There has been anything from a few to 100 participants.

On evenings with many participants, the night can become somewhat of “a parking lot party,” Lugar said. Library staff will even call random people walking by and ask them if they want to join them in watching the planets.

Tim Camden and Bob Reubendunst both worked diligently on fixing and adjusting the telescopes throughout the night and showing people how to use the telescope. They even had to go to the hardware store before the night started to get a new screw.

“One thing we try to do is help people with finding constellations and stars,” Camden said.

Camden said a lot of people might have a new telescope, but the next part of having one is knowing what to look at.

“Once someone show you a rose is a rose, you know it’s a rose,” Camden said. “It’s the same thing with constellations. It’s once you see it in a book you’ll be able to see it in the sky.”

The Astronomy Night activities adjust with the seasons. Since the library closes at 8 p.m., and it does not get dark in the summer until that time, people will still meet at 6 p.m. to look at sunspots using goggles to look safely into the sun.

Since the event was indoors, Dixon, with the guidance of Reubenhurst and Camden, used the telescope to look at bookshelves, books and a clock above the door.

A problem about searching for astronomical sights that the library helps with is the location.

“One problem is that you usually go out in a field, and it’s dark, and people don’t want to go there- that’s why it’s nice to be in the library parking lot where it’s safe,” Camden said.