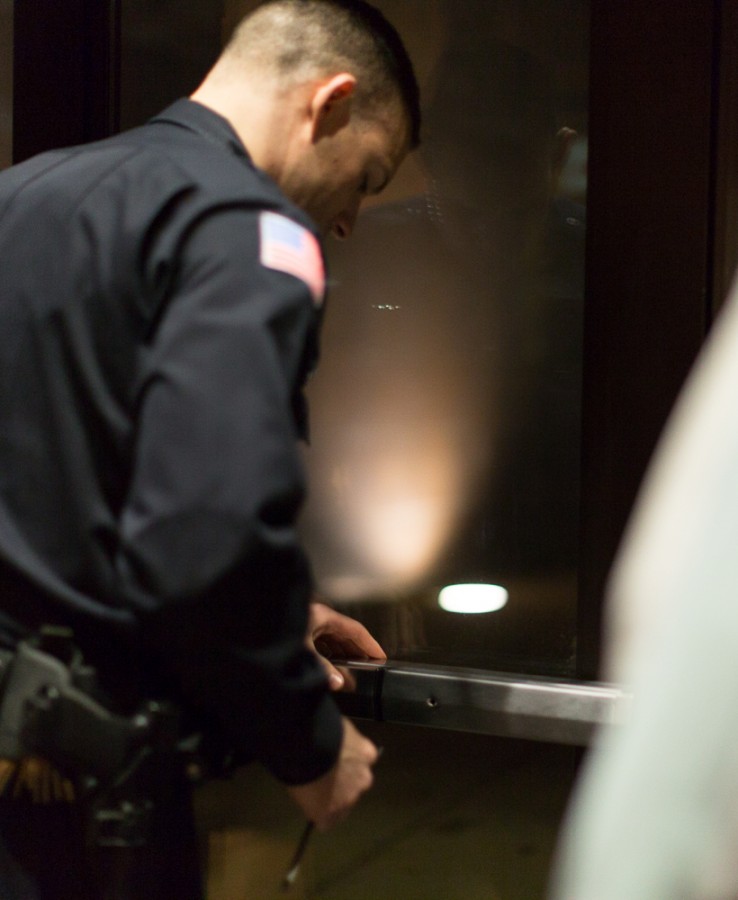 Eastern police officer Seth Howell responds to a finicky door that would not lock on March 21 at the Doudna Fine Arts Center.

The Charleston Police Department advises students to remember certain precautions they can take to keep safe as school begins again for another semester.

Dave Chambers, deputy chief of CPD, said crime trends and statistics do not change too drastically around the beginning of the year.

However, when students are gone for winter break, a “rush of burglaries” usually occurs, as was the case this winter.

For example, Charleston officers arrested two men charged with multiple residential burglaries that occurred in the southeast portion of Charleston on Dec. 28 and issued arrest warrants for two others, according to a CPD press release.

The CPD was able to recover all the property that was stolen from the burglarized areas, Chambers said.

Chambers said Charleston is still a safe place to live in; however, low crime rates do not mean crime does not happen.

Like other communities, Charleston has its issues, such as an increased presence of heroin and methamphetamine.

A steady number of batteries have reported recently as well.

In order to be safe, students can take a number of precautions.

“We have control over what risks we place ourselves,” Chambers said.

“I encourage everyone to secure their property and ask themselves if they are placing themselves in areas that put them at risk,” Chambers said.

The University Police Department website lists several tips for students, such as avoiding traveling alone when it is dark.

In the dark, people are safer to walk in areas that are well lit and familiar to them as well as avoid shortcuts such as alleyways that potential victimizers may be in.

The website also advises students to know about emergency services such as phones, blue lights and other ways of contacting help if it is needed.

Along with being aware of these emergency services, another suggestion is that students should be aware of their surroundings by noting suspicious activity and reporting all suspicious persons, vehicles and activities to the UPD or the CPD.

It also lists that students need to be responsible when it comes to their peers and keep an eye out for their neighbors and fellow students. This can mean using the “buddy system” in order to ensure that people do not have to walk alone.

If students witness someone else being victimized or put in danger, it is also their responsibility to let either the police know, the website states.