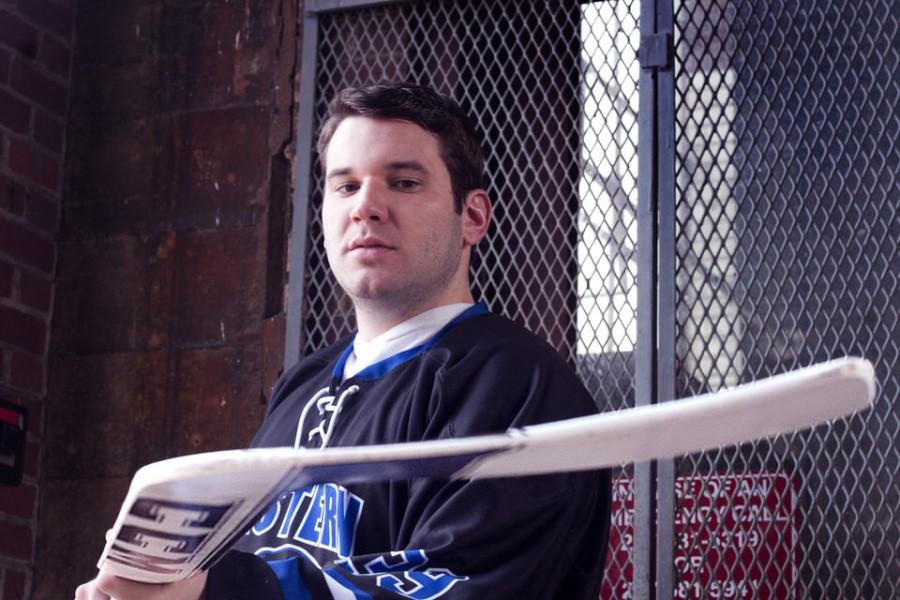 Andrew Teske, senior goalie for the Eastern hockey club, finished his five-year career for the Panthers last weekend. Teske, of Lemont, is an kinesiology and sports studies major with a concentration in exercise science.

Not long after he could walk, Andrew Teske could skate.

Teske, who finished his fifth season as a member of the Eastern hockey club last week, comes from a hockey family.

“My dad and his brothers were all into hockey,” he said. “My grandma, she was a general manager of an ice rink when my dad was little. I learned how to skate when I was like two.”

At the age of six, Teske began playing competitively, but it wasn’t until he was a little older that he finally got in goal.

“I always was the one when we played street hockey or whatever the one that was like ‘yeah, I’ll throw the pads on, you know,’ just so we have a goalie,” he said. “I just really liked it ever since I started doing that.”

Teske said he was 12 years old when he first started playing goalie. For Teske, what he likes most about the goalie position is the power it gives him on the ice.

“I feel like goalie is just the position that if you have your best game, it doesn’t matter, they have to get it through you to win the game,” he said. “I just feel like all that power with you pretty much having control of the game. It just kind of appealed to me.”

“He always played with heart,” he said. “He was a leader even though goalies can’t be captains. That role that he played just kind of impacted me.”

After playing his sophomore and senior year at Providence Catholic High School, Teske came to Eastern, where he was already familiar with the club.

“I knew some of the older guys that went to school here when I was in high school,” he said. “I came to visit a few times and they seemed really cool so I figured I’d come give it a shot.”

In his early days with the team, the Panthers’ already had a starting goalie, but league rules state that a player is only allowed five years of eligibility. Teske said the starting goalie at the time only had one semester of eligibility left, so Teske started the entire fall semester and then split time in the spring.

Then, in Teske’s sophomore year he had what he called his greatest moment as a Panther. With the Panthers tied against Loyola on the road in overtime, Teske was able to make an assist to the team’s leading scorer Mike Sorrentino, who was able to take the puck the length of the ice for the game-winner.

Teske said it still hasn’t hit him yet that he’s played his last game, a loss to Davenport last Saturday at the David S. Palmer Arena.

“They’re probably one of the better hockey teams that I’ve played this year,” he said. “I feel like it kind of hasn’t hit me yet that I’ll never be playing in a college game again. It’s just surreal that it’s all coming to an end.”

Teske, a kinesiology and sports studies major, with a concentration in exercise science, is now looking for an internship to finish his degree. He said he’ll still follow the Panthers while he’s away and said the team has a bright future.

The Panthers’ next series will be Jan. 9 and 10 at the David S. Palmer Arena against Cincinnati, but they’ll have to do it without Teske.

“It’s kind of hard for a person to say ‘I’m a leader,’ but I feel like I was like that for these guys,” he said. “I hope that they see what I’ve done and take it to heart. One day they’ll be the guys passing it down to the other guys.”