Junior swimmer stays focused in and out of the pool 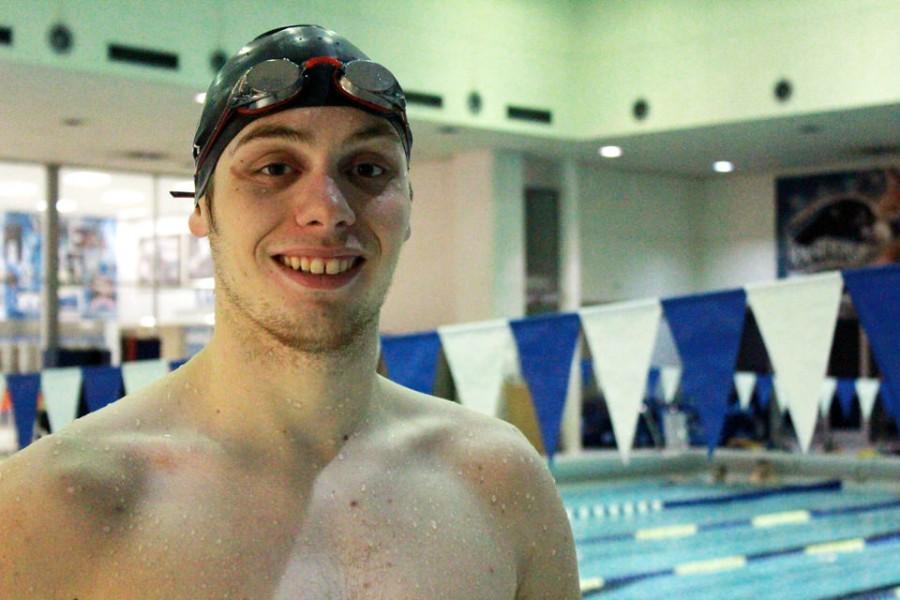 Entering the 2014 season, the Eastern men’s swim team has four juniors on its roster, making them the oldest on the squad. Dylan Ferguson is one of the four, entering his third season with the Panthers.

Ferguson first began to swim when he was eight years old because his parents were afraid that he would drown in the pond that was behind their house, so they enrolled him in to swimming lessons.

During his lessons, a swim coach saw him and asked him to join the team. He was swimming on the 10 and under age group team.

Besides his parents starting him to learn how to swim, Ferguson said that it was this coach that got him to love swimming and keep going with it.

“She was definitely my biggest motivation getting into swimming, she was really kind but she pushed you when you needed it,” Ferguson said. “She wasn’t the kind of person that was going to let a little kid ease out of things.”

Growing up, Ferguson said that the biggest challenge he encountered was trying to stay motivated after bad swims. But being little he said, he was able to move on and the next time it would be better.

But that is not the case in college.

“As your body gets older, you’re mainly going to have bad swims leading up to conference because your body isn’t going to be rested,” Ferguson said. “Because when you’re little, you’re going to have all that energy still.”

Ferguson said that he’ll usually feel tired throughout meets and practices, but once conference rolls around he gets a new burst of energy, where he will then start seeing better swims.

When Ferguson was in high school he was considering a couple of schools to go and swim at, besides Eastern.

But he chose Eastern because the head coach at the time, Elliot McGill brought him on a visit and put him with a friend named Josh that he knew from high school.

“It was mainly because of Josh that I came – he showed me a really good time and he showed me all the fun things that happen on Eastern’s campus,” Ferguson said. “I just felt welcomed amongst the team.”

While he was on his visit he was able to see Eastern compete in a meet. Watching it just made him miss competing all the time.

In practice, Ferguson takes a different approach than most people.

The main thing that he focuses on in practice is other things outside of swimming. He said that he gets in his head too much and when that happens he feels he swims worse.

The same goes for swim meets for him, because that is really where he sometimes gets in his own head. So, he has been trying to focus on not doing that and not thinking about it too much.

Ferguson competes in the freestyle race, and the individual medley in meets for the Panthers.

He feels that the individual medley is the stronger race of the two for him, specifically the 400-IM/

He keeps seeing improvements in his times for that race, so it always makes him happy to swim in it.

Ferguson thinks that the reason he has success is because of how competitive he is. Even in practice, he goes 100 percent to try and beat a teammate in practice, which carries over and helps in meets.

Now, Ferguson is the same as the upperclassmen he met on his visit day to the freshmen and sophomores on the team.

He will help them through drills that they may struggle with and work with them until they get it right. He will also just keep their head up if they struggle in meets and do not get times that they want. He is able to help with that because he said he was the same way his freshman year.

In the Summit League Championships during his freshman season, Ferguson had his most memorable race.

The two things that he really remembers is the 500-freestyle because he and his teammates took up half the lanes and were all swimming right next to each other.

He also remembers right before his 400-IM final all of his teammates came right up to him to support him and tell him it doesn’t matter how he swims, as long as he can beat the swimmers from Western Illinois University.

Ferguson was able to get his best in season time in that race by five seconds.

Outside of the water Ferguson is training for an Iron Man competition and a triathlon.

Ferguson said the work he does there helps build his leg strength to help with is kicking, which is something he looked to improve on.

Ferguson got into triathlons during the summer because of a friend. He describes them as being addicting. He has recently signed up for five upcoming triathlons and is also signed up for an Iron Man in 2015 in Texas.

Ferguson and the rest of the Panthers will not be competing until Jan. 16 at the WIU double dual.

In all that time off from meets Ferguson plans to stay in the pool and keep training, and will also keep training for the Iron Man.