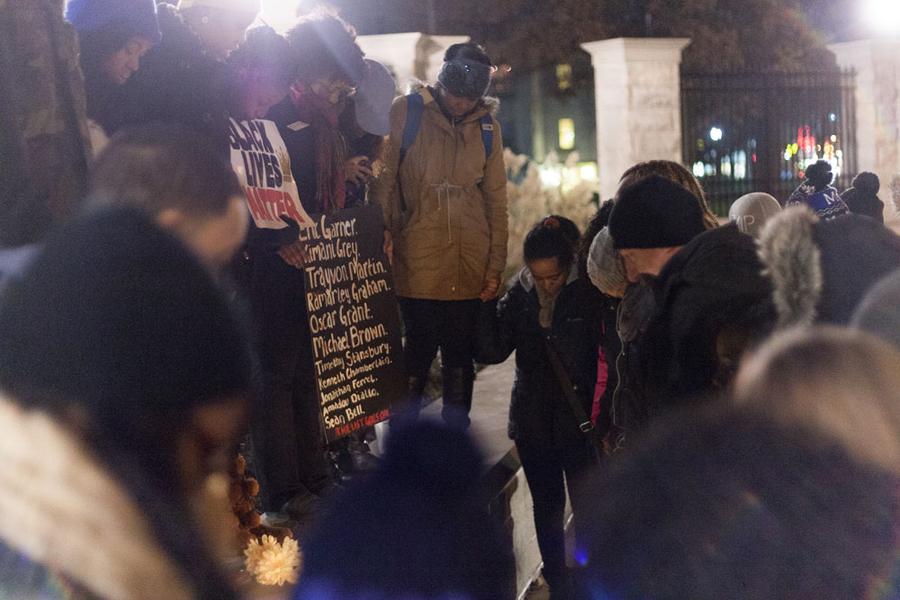 Students pray outside the gates at Old Main on Tuesday. The event, sponsored by the Performing Arts for Effective Civic Education student organization, was a solidarity march from Carmen Hall to Old Main for the events in Ferguson, Mo.

Shamerea Richards, the president of the organization, said she started the RSO one year ago as a way to impact the university and do something positive.

“I’m very expressive,” Richards said, who was involved with dance when she was in high school.

The organization is a way to help members of the community through civic duty as well as poetic, and musical movements through education. The media is one of the most mass sources of information and when something is shown through the media it triggers an emotional response, which is why the organization meets weekly to discuss whatever is happening in the news, Richards said.

“PAECE is my baby and my child,” Richards said.

Richards said from whatever has been heard via news, those in the club can use it for their create platform of expression for poetry slams. The first year they did community service events giving back to the community and from their service they had a toiletries drive, which saw 10 boxes filled requiring the assistance of Rachel Fisher, the director of student community service.

Now, the performing arts RSO is in its second year and has been in a serious of panel discussions and helped the Gateway students move in earlier this semester. Not only have they been involved in panels and assisted with moving students in, the organization orchestrated its very own march from Carman Hall to Old Main in response to the Grand Jury’s decision not to indict Darren Wilson for shooting and killing 18-year-old Michael Brown.

“I want to help inform and educate,” Richards said.

“I think that one of the best things you can do is by giving back to your community,” Richards said.