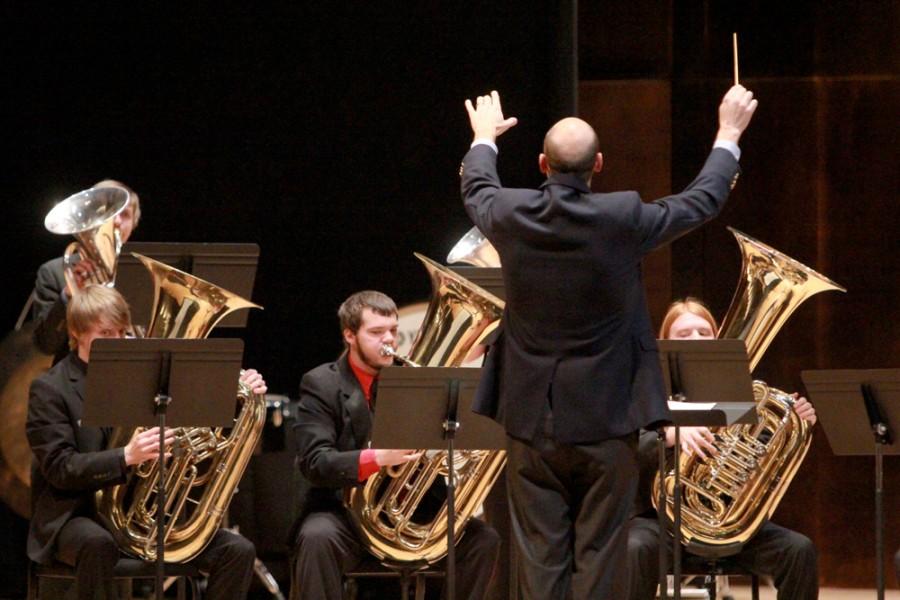 Dr. Todd French directs the Tuba and Euphonium Ensemble during the Evening of Brass recital Monday in the Recital Hall of the Doudna Fine Arts Center.

Doudna Fine Arts Center concertgoers were treated to an “Evening of Brass” Monday that showcased the EIU Brass Faculty and Students.

The night started out with great energy and momentum and kept it up throughout the night. The first act began with a group of trumpet music, then french horn, followed by the trombone.

Each group of instruments brought their own musical styling to the stage.  Although these groups were small, they still had the power of a full band, capturing the audience’s attention with each new song. In the second act, many of the instruments played together, adding another layer to the music being played that night.

In each song played, the soloists and ensemble members played with precision and musicality, playing with power while still highlighting the subtle nuances in each song that made them unique.

Every group of instruments needed a different number and set up of music stands and chairs, and the stage crew managed to set up the stage for each group quickly and efficiently making the show run smoothly.

Each song played by the brass instruments brought something new to the show, such as the song “Metallic Fury” which was a song with many loud and energetic parts, or “Miserere mei, Deus.”

The music selections for the night included a great variety of music, with a good mix of the more dynamic songs such as “Metallic Fury” and more peaceful songs such as “The Echo Song.” There was even a good selection of jaunty Christmas music by the trombones, with festive renditions of “Good King Wenceslas,” “We Three Kings,” and “Joy to the World.” To add to the festivity, there was one person ringing a bell and playing a tambourine as an accompaniment to the trombones.

A prominent accompanist of the night was organist Gary Jensen, who played his organ in the songs “Fanfare for Brass, Percussion, and Organ,” “Solemn Entry of the Knights of the Order of St. John,” and “Posaunen und Orgel.” The organ added a new style to the music that blended well with the rest of the instruments while still standing out in its own right.

The brass musicians’ clothes also added to the performance, with some dressed professionally in suits and others dressed in Christmas sweaters to fit their Christmas music.

The song “Echo Song” played with trumpet, tuba, french horn, and an instrument called the “Euphonium” had two groups of musicians playing next to each other, giving the song the echo effect it called for.

Something else different that the tubas did was to take a break from playing their instruments in the song “Angels We Have Heard on High” to sing part of the chorus a cappella.

The song “Solemn Entry of the Knights of the Order of St. John” was a song that started out quietly with one instrument playing, until the rest of the instruments started playing and allowed the music to fill the room, ending with a flourish.

It was these effects and styling choices that made the audience give enthusiastic applause after every song. There was even applause for the stage crew setting up the stage for the last song.