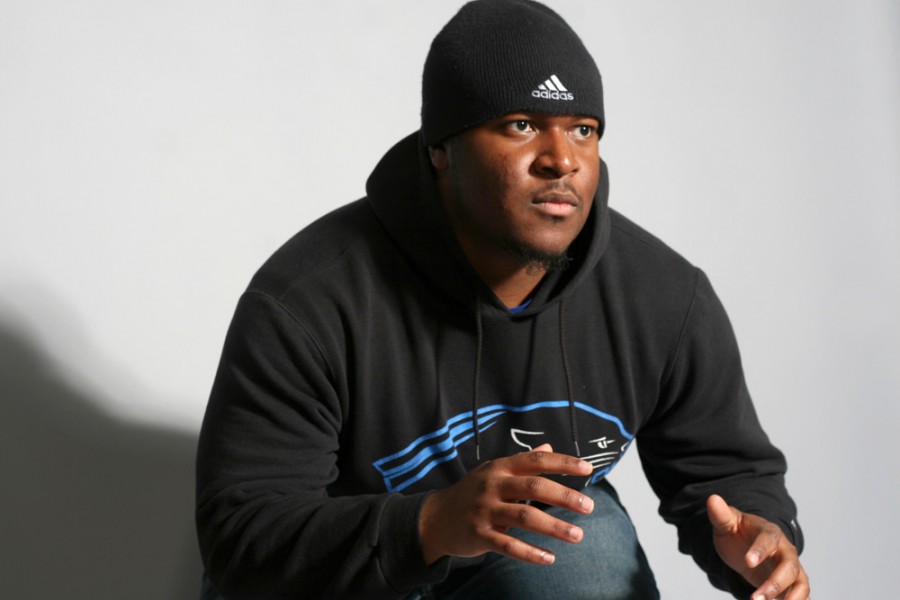 Lenzell Green, a junior sports management major, transferred to Eastern from the University of Iowa, where he was a walk-on on the wrestling team. Green is now a walk-on on Eastern's football team as defensive lineman.

From the time he was eight years old, all Lenzell Green wanted to do was play football. Now, after a long journey, he’s hoping he can play at Eastern next season.

Like a lot of high school football players, Green decided to go out for the wrestling team in order to stay in shape during the off-season.

But Green, who played offensive and defensive line while at East Hazelwood High School on the north side of St. Louis, Mo., didn’t just want to stay in shape. He wanted to win.

“[Football] was my No. 1 sport,” Green said. “I only did wrestling to stay in shape. But I ended up winning, doing my thing. I hated to lose.”

Green played football all four years at East Hazelwood and wrestled for his first three years, taking his senior year off to recover from a shoulder injury. He received opportunities to play college football from Eastern, as well as other smaller Division II and Division III schools, but Green decided to try his luck as a walk-on at the University of Iowa.

When Green got to Iowa, he said the recruiter told him there wouldn’t be a spot for him just yet – to wait until next spring and try and walk-on again.

Wanting to stay in shape, Green decided to contact Iowa head wrestling coach Tom Brands to try and earn a spot on the team.

Green knew what he was getting into. The Hawkeyes are one of the most successful Division I wrestling programs in the nation with 23 NCAA national championships.

A big part of that success goes back to Brands, who won three national championships with the Hawkeyes as a wrestler in the late 80s and early 90s. A 1996 Olympic gold medalist and member of the National Wrestling Hall of Fame, Brands returned to his alma mater as head coach in 2006.

“You could definitely tell he was the head coach,” Green said. “He definitely put that fear in you.”

Green said he did his research on Brands and the program but was still nervous when it was time for his first meeting in the coach’s office.

“Heart was pumping, definitely,” he said.

In the office, another person, who Green said he thought was “just a regular guy”, joined Brands.

“He introduced me to him in the office,” he said. “First he asked me if I knew who he was and I said no. I was thinking he was just a regular guy.”

Green said Brands later told him about the statue outside of Carver Arena, where the Hawkeyes hold their meets, of former head coach Dan Gable, who was the man with Brands in the office.

“I didn’t know who he was, you know, coming from St. Louis and everything,” he said.

Gable won 15 national championships as the Hawkeyes’ coach between 1976 and 1997. Gable, who lost just one match in his entire collegiate career at Iowa State, won the gold medal at the 1972 Olympic games without giving up a single point. In Iowa, Oct. 25, is Dan Gable Day.

“They told me that they don’t just let anybody on,” Green said. “I remember the first workout they put me through. I aced it, but it was hell.”

Green, who wrestled in the heavyweight level, often partnered in practice with Bobby Telford, Iowa’s top heavyweight, who finished fourth at the NCAA championships last season and was previously ranked No. 1 in the nation.

Green said each morning after the team finished its running, Brands would have the team carry teammates up the stairs of the 15,000-plus seat Carver Arena.

Green eventually worked his way to earning a partial scholarship, but the financial burden of paying out of pocket was quickly becoming too much to handle. For that reason, Green needed to start looking for another school.

Green said it was difficult, emotionally, to leave Iowa.

“They treated me well up there,” he said. “Definitely wish I could have stayed.”

“I met Lenzell when he was in high school,” Solomon said. “We invited him to a program that we have called Access Granted in February, he came, he really enjoyed it, but didn’t get him.”

Even though Green picked Iowa over Eastern, he and Solomon remained in contact.

“He ended up going to Iowa, but we still stayed in contact through social media, kept me updated and he let me know that he was thinking about transferring,” he said. “I let him know that our door is always open and now he’s here and he really enjoys it.”

Access Granted, organized by the Admissions Office and the Office of Minority Affairs, is an Eastern program that invites students of color from across the state of Illinois and the surrounding Missouri region to tour campus. The weekend leads up to Eastern’s February open house.

“Me and (Solomon) got pretty close and tight and I just kept emailing him about everything going on at Iowa as far as finances and how everything was going,” Green said. “He ended up making things happen for me.”

Solomon said the Access Granted program has been very successful for the university in recent years.

“We roughly yield 75 percent of the students that come,” Solomon said. “(Green) really enjoyed it. He stayed in contact with a lot of the kids from that program.”

Green expressed his interest about playing football to Solomon and Solomon helped him get in touch with the right people.

“I informed him of coaches to get in contact with and he took the ball and ran with it,” Solomon said.

Green had originally been recruited out of high school by Mike Lynch, who coached for nine seasons as an assistant at Eastern before leaving for Bowling Green along with former head coach Dino Babers.

Green met with James Truxillo, a safeties coach and defensive recruiter for the Panthers.

“When I first got here, Coach Truxillo, he Googled my name in front of me and he was shocked to see that I was an Iowa wrestler,” he said. “He was shocked; he was like ‘wow, what made you come here’ and I told him my situation.”

Truxillo, a former graduate assistant at Louisiana-Monroe, was hired as a part of new head coach Kim Dameron’s staff this past year.

“You know what goes into wrestling at that level: hard work, sacrifice, dedication, all those things,” Truxillo said. “We knew that he was a pretty good person just to have on our team.”

Truxillo said sometimes coaches run into problems with walk-on players, but that Green was not one of them.

“He’s a nice kid, very respectful, you could tell that he was brought up that right way,” he said. “We get a lot of kids that want to walk on, and you don’t want to have to necessarily deal with them being a distraction. He’s a good kid.”

Truxillo said with Green being a wrestler, he likely has good hand skills and plays low to the ground – all qualities that make for a good defensive lineman.

Green, a sports management major, was ineligible to play last season because of NCAA transfer rules, but said he will be eligible for spring practices. Just like at Iowa, Green is a walk-on who is trying to earn his way on to the team and hopefully get a scholarship.

“I don’t really need nobody in my ear,” Green said. “It’s just common sense to me: work hard, play hard. “

Green said his biggest motivation is his family.

“Going through some of the struggles I went through in St. Louis, it wasn’t easy coming up,” he said. “I grew up in a rough neighborhood and seeing some of the things that I saw, I don’t want my kids to see, I don’t my little cousins, I don’t want anybody to have to go through that.”

Green said after college he hopes to coach at the college and eventually professional level.

“I think I could be a better football coach, but I could still do wrestling,” he said. “I’ve still got a couple moves in me.”