Track and Field opens up with EIU Early Bird 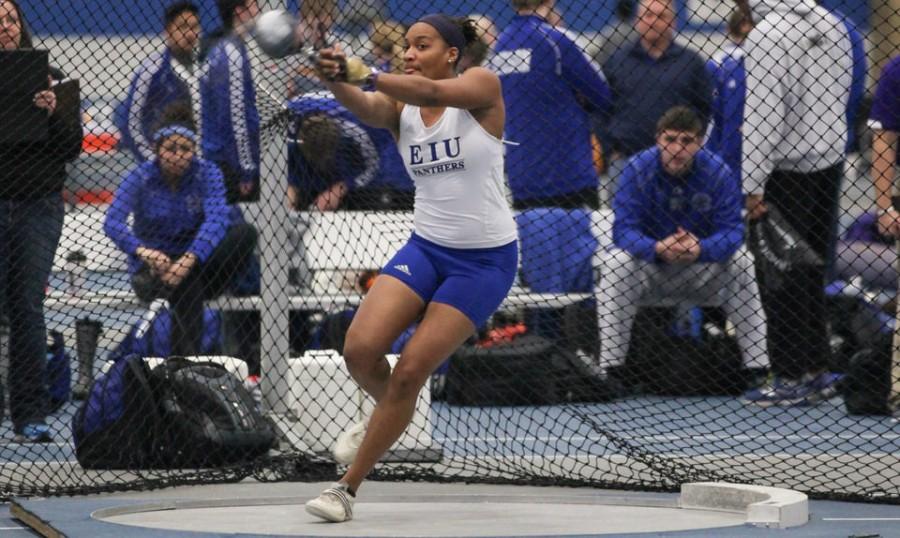 Senior thrower Condia Smith throws the hammer on Jan. 25 in the Lantz Field House during the John Craft Invite.

The Eastern men’s and women’s indoor track and field teams begin their seasons at 3 p.m. Friday with the EIU Early Bird meet in the Lantz Fieldhouse.

The meet begins at 3 p.m. with field events, followed by the women’s pentathlon, and then ends with all the running events.

The women’s team returns seven All-OVC athletes including Dhiaa Dean, who received first team All-OVC awards in both the 800-meter and the distance medley relay. Kristen Paris, Amina Jackson and Kristen Rohrer all return from that winning relay team as well.

Southeast Missouri’s men’s team is the reigning OVC champion, which return most of its roster from last year.

Senior Blake Carter broke two-school indoor track and field records with one coming at the EIU Early Bird last year, when he ran 6.76 seconds in the 60-meter dash. He is the returning OVC champion in the long jump. Senior Reggie Miller won the OVC championship in the triple jump, where he recorded a season best 15.26 meters. Kevin Farley, also a senior, won the OVC in shot put last year and was runner up in the weight throw.

Jianna Williams earned all-Valley honors last year in the weight throw where she had a third place finish.

Senior Ryan Rutherford also earned All-Valley honors in both the 3,000-meter and the 5,000-meter races. Senior Chase Paveloins lead the pole vault team last year, when he had personal best at the MVC championships.

Head coach Mike Stevenson enjoyed early success in his career, but has not won conference titles since 2002 with the men and 2005 with the women’s team.

The University of Illinois’ women’s track and field team returns sophomore Kandie Bloch-Jones, who qualified for the NCAA championships in the high jump and earned second-team All-American honors. She was the Big Ten champion in high jump and placed in the top three at every meet during the regular season.

Red-shirt junior Alyssa Schneider recorded the second fastest time in school history in the 5,000-meter run. She also recorded three first-place finishes included the mile run at both the Illini Open and the Illini Classic.