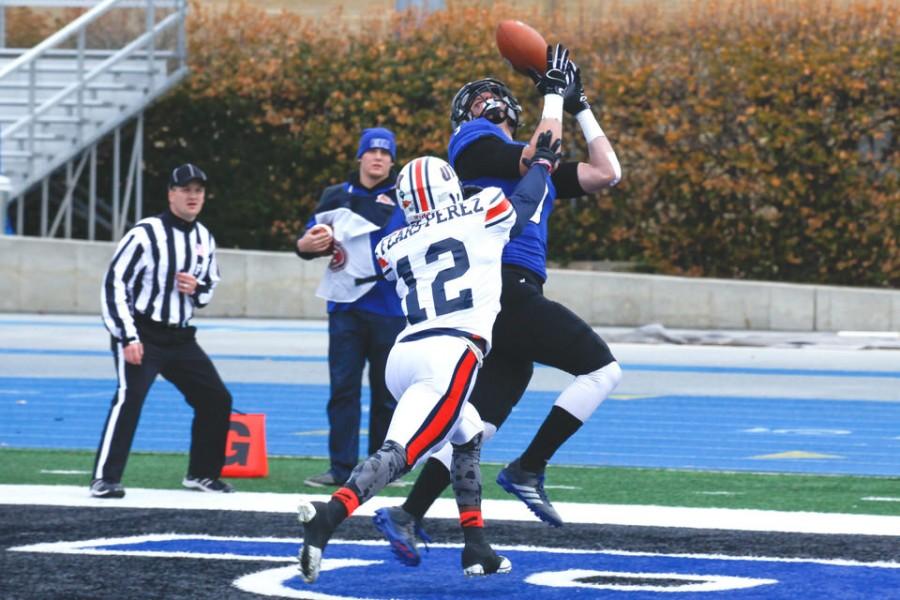 An underwhelming performance from the Eastern football team spoiled Senior Day in its 37-16 loss to Tennessee-Martin Saturday at O’Brien Field.

Prior to Eastern’s loss last week to Jacksonville State, it had hoped that Tennessee-Martin would be all that stood between it and an Ohio Valley Conference title, as well as a ticket to the FCS Playoffs. Instead, the season finale for the Panthers turned into an unfortunate farewell for 22 seniors.

Panthers’ coach Kim Dameron was not pleased with any facet of his team’s showing Saturday afternoon, starting with himself along with the effort of the players on the field.

“We got outcoached,” he said. “We got outplayed. We got outefforted. You name it. They did it better than we did it today.”

A 44-yard touchdown pass from senior quarterback Dylan Favre to junior receiver Rod Wright capped off what was a dominant second quarter for the Skyhawks and a lackluster first half from the Panthers.

Eastern came out looking sharp with senior quarterback Andrew Manley completing a quick five-yard pass followed by a 70-yard rushing touchdown from junior running back Shepard Little. The early trot into the end zone was the third touchdown on the season for Little.

The first drive also led to a missed extra point from freshman kicker Nick Bruno. It was the first missed PAT on the season for Bruno.

Junior defensive tackle Dino Fanti was working hard to pressure the Skyhawks’ starting junior quarterback Jarod Neal. Fanti turned a near sack into a fumble early in the first quarter only to have possession retained by the Skyhawks.

Eastern and Tennessee-Martin seemed to mirror the play of one another on both sides of the ball in the first quarter. On the fourth offensive play for the Skyhawks they were on the scoreboard, scoring on a 45-yard scramble by Neal.

Tennessee-Martin continued to make big play after big play throughout the game. Out of seven scoring drives, the Skyhawks only needed more than nine plays on one of them to reach the end zone.

Eastern and Tennessee-Martin are the top two red zone offenses in the OVC this season. The Skyhawks converted on 4-of-4 trips inside the 20-yard-line.

Senior running back Taylor Duncan found himself in the position to add to the Panthers’ impressive tally from in the red zone, but came away unsuccessful in the second quarter as he reached across the goal line only to have the ball knocked out of his hand.

“I can’t fumble in that situation,” Duncan said. “I took a risk and I shouldn’t have done that.”

What was initially seen as a score from the sidelines turned into a pivotal moment from which Eastern never recovered. A touchdown would have answered the Skyhawks’ second touchdown as well as brought the Panthers within three points.

“It doesn’t matter whether it was over (the goal line) or it wasn’t, you’ve got to protect the football,” Dameron said. “That’s a 14-point swing.”

The Panthers failed to get much of anything going offensively after their first drive. Manley finally managed to hit senior receiver Adam Drake with a perfectly placed three-yard touchdown pass early in the fourth quarter.

Drake recorded 11 receptions on the day. The receiver with the next highest number of receptions for the Panthers was Stephen Bravo-Brown with four.

“It’s his work ethic, where he is, and his route running,” Dameron said. “That’s why (quarterbacks) trust Adam.”

It wasn’t so much as what the Panthers couldn’t do offensively as it was what they couldn’t stop on the defensive side. Tennessee-Martin quarterbacks and running backs combined for more than 300 yards on the ground, led by senior running back Abou Toure.

“When you give up 308 yards rushing, you’re not going beat anybody,” Dameron said. “Nobody.”

A disappointed Dameron said the Panthers beat the teams this year that they should have beat, but they need to be able to beat the top teams. He said that recruiting is going to play a large factor in the offseason for the Panthers.

“We have a lot to be proud of and what we’ve done here,” Duncan said. “But it’s also very disappointing to go out like that.”

The Panthers ended the season with a 5-7 record, with a four-game win streak that kept their postseason hopes alive.