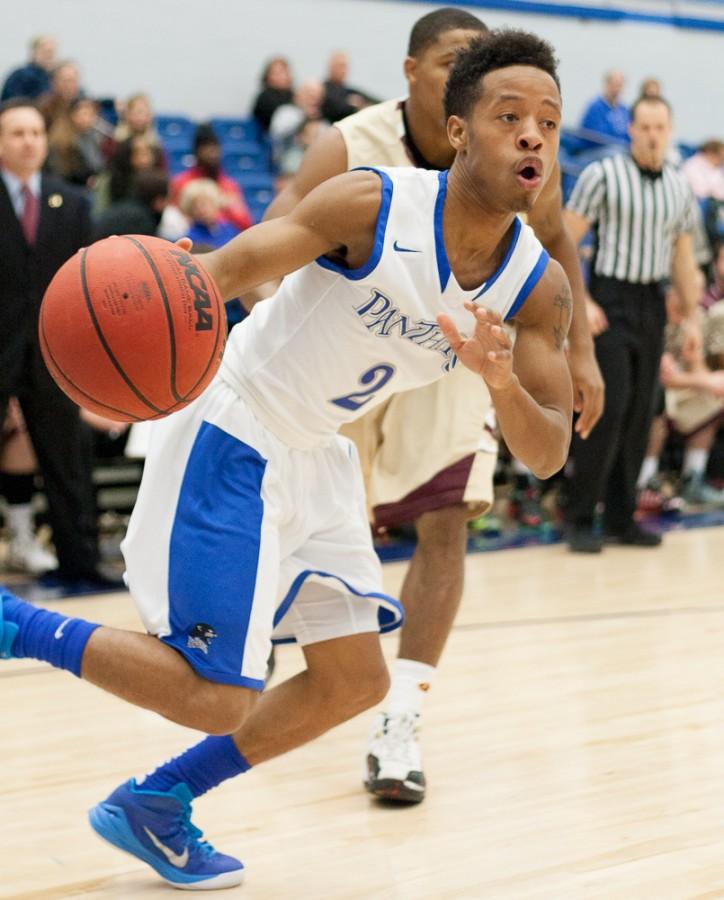 Freshman guard Chris Thomas hit a three-pointer that was the first made field goal for the Jaguars just under the nine-minute mark of the first half. Until that point, the Panthers held Southern to a 0-for-12 shooting stretch in the first 11:10 of the game.

“We were really smart in the way we guarded,” Eastern coach Jay Spoonhour said in his postgame interview.

At halftime the Panthers led the Jaguars 32-14 after outscoring them 12-8 in the paint. Eastern answered an early free throw by Jaguars’ senior forward Keith Davis with a 21-0 run that led to their biggest lead of the game at 23 points in the first half.

“You look up at the scoreboard and think, ‘how are we going to hold on to this lead?”’ Spoonhour said.

Leading the charge early on for Eastern was senior guard Reggie Smith. He was hitting the boards and distributing the ball, while recording an early steal and block that sparked the defensive clinic that was the Panthers’ first half.

Anderson dropped in eight of his game-high 16 points during the first half. Alongside Anderson was senior forward Josh Piper leading the Panthers’ offensive attack with all of his nine points coming by way of the 3-point shot.

Southern began chipping away at the lead from the time it made its first basket. The Jaguars were led by freshman forward Jared Sam, who had a team-high 13 points and three rebounds. The Jaguars cut the lead to nine points after forcing four straight turnovers from Eastern in the early moments of the second half.

“It’s like watching the water creeping up in a submarine,” Spoonhour said.

Anderson halted the brief lapse in play from the Panthers. He reignited Eastern on both sides of the ball going coast-to-coast following consecutive defensive rebounds, which led to an easy lay-up and two trips to the free throw line.

“I really liked what Trae was doing,” Spoonhour said.

Spoonhour said that Anderson is always looking to make the good plays, but needs to learn when to settle down sometimes and secure the ball.

“It’s like he is looking for traffic to dribble through,” he said.

Adding two blocks and six rebounds to his stat line, Anderson capped off his week earning a spot on the Emerald Coast Classic All-Tournament Team.

The Panthers improve to 2-5 on the season, but return home with a 1-3 record on the week after facing stiff competition in the likes of Cincinnati, North Carolina Central, and No. 23 ranked Creighton.

“This stretch of games is about as hard as you want to start,” Spoonhour said.

Eastern will host Ball State University at 7 p.m. on Wednesday in Lantz Arena.