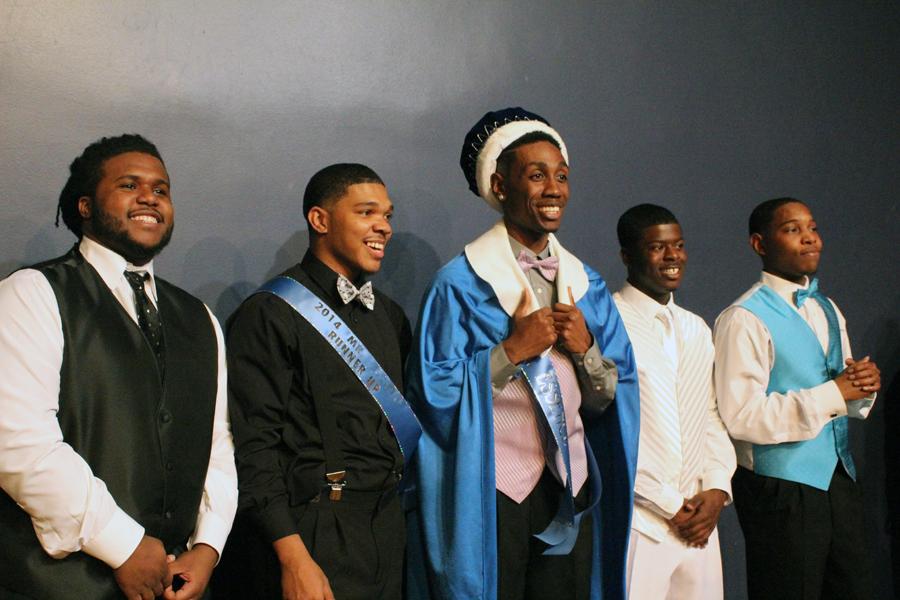 The Essence of a Man contestants pose for pictures after The Essence of a Man 2014 pagent in the Grand Ballroom of the Martin Luther King Jr., University Union. In order from left to right: Brandon Hightower, Akeem Forbes, DeVonte Dixon, D'Andre Day, and Daniel Wallace.

A group of young women each with a face of boredom sat at their desks waiting for their professor to come into their classroom.

Soon, Devonte Dixon, a junior communication studies major, walked into the classroom and began to cite a poem about growing up and the challenges of being an adult.

The poem transitioned subtly into a tale about a boy who was sexually assaulted and molested by his older cousin.

“He was scared and he was defenseless, and he was being violated,” Dixon said.

Ending his descriptive tale saying the boy who suffered through the torment and humiliation “Was me,” won over the crowd and judges — Dixon was crowned Mr. Essence 2014 during the Essence of a Man scholarship pageant Thursday evening.

Dixon became emotional as the crown and cape was placed upon him at the announcement of his winning.

“This feels like the best feeling in the world; I feel like a kid at Disney World,” Dixon said.

Since being crowned Mr. Essence, he plans to help those who are like him to step over boundaries that he felt were holding him down.

“I feel like there are a lot of people on Eastern’s campus who have a story,” Dixon said.

Dixon’s skit ended with a representative of the Sexual Assault Counseling and Information Service telling the audience and crowd about the resources available to students on campus.

Akeem Forbes, a sophomore English major who won first runner up, performed his skit in the manner of a chess game with him portraying the black pawn in a game of white pieces.

Forbes’ skit examined metaphorical existence of African-Americans being seen as a smaller piece to a larger game; however, he used the position of the pawn on a chessboard as a place of power and not position of weakness.

Forbes said because he is the black pawn in a game run by the white king, he can only move forward, never backward, always striving for something better aside from the stigmas, lies and stereotypes African-Americans face.

Each line spoken by Forbes addressed the issues faced within the African-American community. As he stepped closer to the white crown, he called out all the stigmas calling them lies.

“Your tongue lashes at me like whips to my back,” Forbes said. “To you white king, I say checkmate.”

Many of the contestants addressed an issue that is current either to African-American males or the race as a whole. Even the subject of being raised fatherless was touched on during the night.

D’Andre Day, a senior kinesiology and sports studies major, held his hands up telling the audience members “Don’t shoot,” which was a tribute to the Ferguson, Mo., case with the death of Michael Brown this past summer.

“How many sons and brothers are we willing to sacrifice before we say enough is enough,” Day said.

Day addressed the misconception that some police officers have a black males stating every 28 hours a black male is killed.

“My worth is greater,” Day yelled. “I want change and I want it now, so let’s wake up.”

Day’s performance struck a nerve with members of the audience as they cheered and clapped once it concluded. The issue of black males dying at the hand of police brutality is a subject many felt deeply.

When it came to the talent portion of the night, many of the men sang, did interpretive dance and even mimed. Each of the performances had themes of uplifting and overcoming obstacles.

“We are more than what the eye can behold,” Day said.