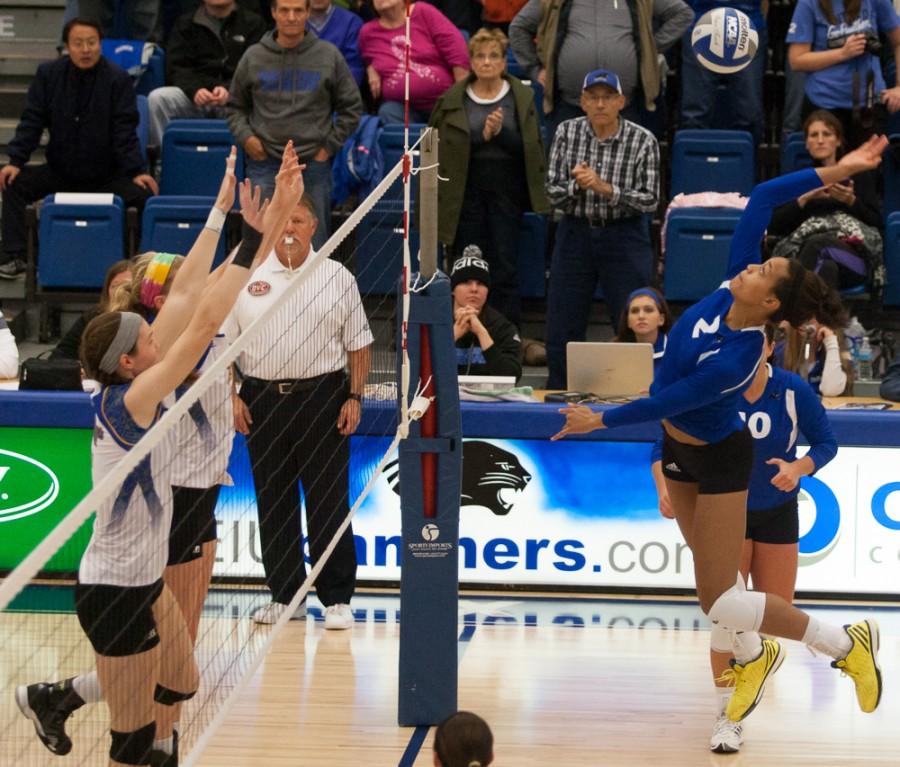 Junior outside hitter Chelsea Lee leaps to hit the ball during the Panthers' 3-0 win over Morehead State. Lee had 12 kills and scored 13 points during the game.

The Eastern volleyball team beat Eastern Kentucky in five sets in the first round of the Ohio Valley Conference tournament.

The No. 6 seeded Panthers were led by All-OVC player Abby Saalfrank, who led all players with 24 kills and a season-high 18 digs for her 14th double-double of the season. She also had four service aces and two blocks in the upset over the third seeded Colonels.

“Everything just really came together today,” Saalfrank said in a press release. “Our blocking got off to a slow start, but we eventually started to click, and our communication between the back and front courts was really great. We will definitely take this energy into tomorrow’s match.”

The Panthers will take on No. 2 seed Belmont in the semifinals at 4:30 p.m. Friday at Racer Arena in Murray, Ky.

The Colonels had the advantage heading into the fourth set, having won both the second and third sets by scores of 25-21 and 25-22. However, the Panthers started the fourth set with a vengeance, taking a 12-8 lead, before the Colonels responded with a 10-2 run and an 18-14 lead.

Josie Winner’s soft kill and a service ace by Kelsey Brooke swung the momentum, and after a few timely kills by Saalfrank, the Panthers were able to pull out the victory in set four, after a huge block by junior Chelsea Lee, who finished with 12 kills and four digs, along with that blocked shot.

That tied the game at two apiece, as Eastern won the first set 25-22.

“EKU’s a great team and still are, but it was a matter of we came out and did a great job of fighting back into it,” Eastern head coach Kate Price said in a press release. “Alexis Plagens, their outside hitter is a good kid, feisty, and we did a good job of containing her at the end to win the match.”

Plagens, a senior, finished her career at Eastern Kentucky with a double-double of 24 kills and 14 digs, and as a member of the OVC all-conference team.

The fifth set saw the Panthers open up with an 8-5 lead, which was sparked by a put-down from red-shirt freshman Josie Winner. She finished with eight kills and two blocks and the Panthers finished off the Colonels with a 15-8 victory.

Seniors Kelsey Brooke and Dakota Springer had 15 and 13 kills, respectively, while Saalfrank added one for the victory.

This is the first time in the last three years the Panthers have won their opening round match.

“That’s the cool thing about the tournament, you have to win to stay alive,” Price said. “Everyone’s slate is clean and we beat EKU in three sets at home this year, and they took two games today. It’s just a matter of fighting for every point till the end because one game/loss and you’re done.”

The Panthers will take on the Bruins, who won in four sets over Austin Peay Thursday afternoon.