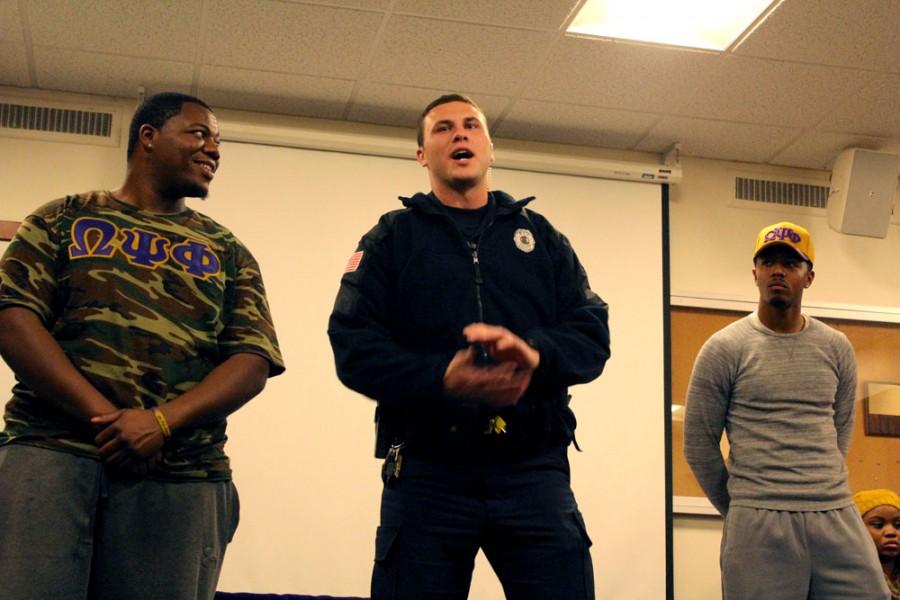 Julien Robertson made the call to University Police at approximately 8:15 p.m. Monday night to report a noise disturbance in the Taylor Hall basement.

When police officer Chase Sanford arrived at the scene, he grabbed the attention of the room and asked to see identification from all those present.

The partygoers were not aware of the ruse put on by Sanford and Omega Psi Phi to raise awareness about police-student interaction.

By acting as if the police were busting the party of non-alcoholic beverages and board games, the fraternity and UPD could engage in talks with the students — talks that Omega Psi Phi President Brandon Byers said would help focus on the aforementioned issues, while also highlighting police interaction with minorities.

“I think that it is an ongoing problem in college communities,” Byers said. “We just wanted to make sure that those going to house parties were cognizant of the rules and stipulations behind having a house party.”

Sanford began the discussion by telling partygoers, as long as they are “discrete” the police will not interfere.

“We can’t be the complainers, there has to be a complaint,” Sanford said. “We can’t drive by a house party on private property and think, ‘Oh, I’m going to bust that;’ so discretion is the key.”

At the same time, Sanford explained he is legally required to call an ambulance if there is a health concern.

“If we think there is a potential hazard to your health, we are required (to call the paramedics),” Sanford said. “And yes you can get charged for the ambulance ride or a non-transport.”

The presentation ended with a question and answer session, including an inquiry about what police look for while on patrol.

“As soon as you step foot on the street or the sidewalk, public property, then we can take issue with that,” Sanford said. “It’s not hard to keep the party isolated to the front yard or the porch and if an officer comes by and says there has been a complaint, don’t throw a fit about it, just go inside or in the backyard.”

Outside of party etiquette, the discussion touched on the unrest in Ferguson, and the general issues surrounding police-minority interaction. Byers, who is also a district officer for Omega Psi Phi, felt the students could take away an important lesson from the dialogue.

“You have to ask those questions that are not being asked, Byers said. “We need leaders to step up and lead not only the minority population, but the population in general … to come to a compromise on these issues.”